The White House signaled that its mission in Syria will be focused on the narrow task of finishing off the Islamic State and will leave it to others to fund and conduct post-IS stabilization. 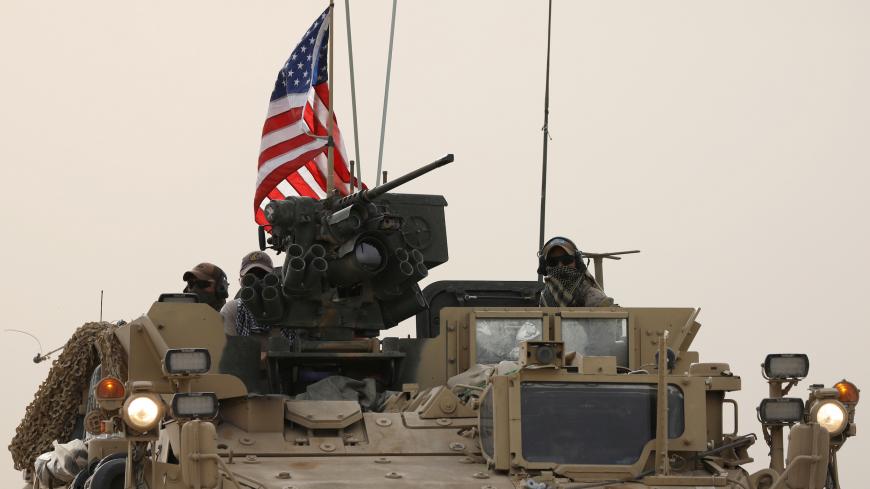 US forces on their military vehicle drive in the Syrian town of Darbasiya next to the Turkish border, April 28, 2017. - REUTERS/Rodi Said

WASHINGTON — A day after President Donald Trump said he wanted to bring US troops home from Syria, the White House announced that the US-led coalition will complete its mission to eradicate the so-called Islamic State in Syria and then leave it largely to allies and partners to fund and conduct stabilization efforts to ensure that the militant group does not return.

The announcement reflected a decision by Trump to narrow the US military goal in Syria largely to a counterterrorism mission, after his administration had earlier said it would keep an extended US troop presence in Syria to also counter the Iranian presence there and give leverage to stalled talks on a Syria political settlement. The United States has approximately 2,000 US troops in Syria, largely to battle the Islamic State, often abbreviated IS but also as ISIS.

“The military mission to eradicate ISIS in Syria is coming to a rapid end, with ISIS being almost completely destroyed,” White House press secretary Sarah Huckabee said in a written statement today.

“The United States and our partners remain committed to eliminating the small ISIS presence in Syria that our forces have not already eradicated,” the White House statement continued. “We will continue to consult with our allies and friends regarding future plans. We expect countries in the region and beyond, plus the United Nations, to work toward peace and ensure that ISIS never re-emerges.”

Trump made calls to the leaders of France, Israel, Saudi Arabia and Qatar over the past two days to discuss the decision, among other matters.

In a phone call today, Trump and French President Emmanuel Macron “have reaffirmed their commitment to ensure the total defeat of ISIS,” the French ambassador to the United States, Gerard Araud, wrote on Twitter.

“On Syria, the President and the King [Salman bin Abdul-Aziz Al Saud] discussed joint efforts to ensure the enduring defeat of ISIS and counter Iranian efforts to exploit the Syrian conflict to pursue its destabilizing regional ambitions,” the White House said in a readout of Trump’s call with the Saudi king on Tuesday.

Trump, in a press conference with Baltic leaders Tuesday, expressed growing impatience with an open-ended military mission in Syria, and said he wanted to bring US troops home.

“I want to get out,” Trump said at a press conference with Baltic leaders Tuesday. “I want to bring our troops back home. I want to start rebuilding our nation. We will have [spent], as of three months ago, $7 trillion in the Middle East over the last 17 years. We get nothing … out of it.”

There has been a long-running difference of opinion among Trump’s advisers over whether the US mission in Syria should be narrowly focused on counterterrorism, or should be more expansive to counter Iran’s influence and put pressure on the Bashar al-Assad regime. The camp that advocated for a more narrow counterterror mission, which appears to have won out, includes longtime US counter-IS envoy Brett McGurk, US Central Command commander Gen. Joseph Votel and the US military more generally. The camp that advocated for a more expansive mission to push back on Iranian influence includes Joel Rayburn, the National Security Council senior director for Iran, Iraq, Syria and Lebanon, as well as former Secretary of State Rex Tillerson and, at least previously, Secretary of Defense Jim Mattis.

“The United States will maintain a military presence in Syria, focused on ensuring ISIS cannot re-emerge,” Tillerson said in a major Syria speech at Stanford University in January. “It is vital for the United States to remain engaged in Syria for several reasons.” Among the reasons for an open-ended US troop presence in Syria, Tillerson said, was so that “Iranian influence in Syria is diminished … and Syria’s neighbors are secure from all threats emanating from Syria.”

While Trump had signed off on in December on the expansive policy Tillerson announced, he appears to have soon changed his mind. Appearing at a press conference with Australian Prime Minister Malcolm Turnbull on Feb. 23, Trump said, “We’re there [in Syria] for one reason, we’re there to get ISIS and get rid of ISIS and go home.” He added, “We’re not there for any other reason and we’ve largely accomplished our goal.”

“Policy veered way off track in December but gravity will pull it back to earth,” a US official, speaking not for attribution, told al-Monitor, referring to the Syria policy Tillerson announced after Trump had agreed to it.

Meantime, Rayburn has spoken to think-tank experts on Syria about how the United States will help push back on Iran’s malign influence in Syria, analysts said.

Trump “empowers people that don’t believe in what he wants,” Aaron Stein, an analyst on Turkish and Middle East security issues at the Atlantic Council, told Al-Monitor. “So they don’t deliver to him the policy options that fit with his worldview. It works until it doesn’t.”

Stein said, “Trump has managed to undercut the factions within his own administration that have spent the past year putting in place talking points and briefing papers on a counter-Iran strategy in Syria, independent of the IS war. Trump clearly doesn’t want to stick around, so at some point he’ll get his way. He is the boss, after all.”

“The section in Tillerson’s speech that discussed diminishing Iran in Syria … is the most problematic section for elements of the Trump administration that really and authentically believe that the US should stop getting involved in land wars in the Middle East, and should instead focus attention to the real and what they believe to be imminent threats that they believe emanate from Asia, particularly the crisis in the Korean peninsula,” Nicholas Heras, a military analyst at the Center for New a American Security, told al-Monitor.

“And quite frankly that assessment is shared by many in the US military,” Heras said. “But the US military also wants to get the job done right and comprehensively when it comes to defeating IS.”

The US military is generally supportive of Trump’s decision to avoid Syria mission creep, and will try to train the predominantly Kurdish Syrian Democratic Forces to perform many of the stabilization operations and prevent the re-emergence of IS, Heras said.

“What the US military is trying to do is get SDF to be a self-running machine capable of providing security, governance and administration for areas that have been conquered from IS, and allow the SDF to be able to negotiate effectively for its place in a future Syria, led by Assad or not, and to be able to interface with international organizations that can provide humanitarian assistance, and reconstruction in territory conquered [from] IS,” he said.

“Where the US military has seems to have carried the day is … helping President Trump further refine his definition of what defeating IS 100% means. In this, the military has played a very important role in advising the president,” Heras said.

“From my understanding, the US military looks at the Syria situation as moving from active military operations to preventative counterterrorism,” Heras said. “What that means, is not simply about erasing all the black spots on the map where IS controls. That is just the first part. The second part is making sure SDF can secure and govern, and the US can shift its focus to North Korea.”

Trump’s counter-IS envoy McGurk, speaking at the US Institute for Peace on Tuesday, said the United States is training the Syrians to do a lot of the critical work removing rubble, land mines and restoring electricity and water so displaced people can return home. “We are training Syrians on this dangerous work and they are getting the job done,” McGurk said. “So almost 100,000 [have] now returned to Raqqa.”