The fall of the Islamic State capital could put the US military on a collision course with Assad. 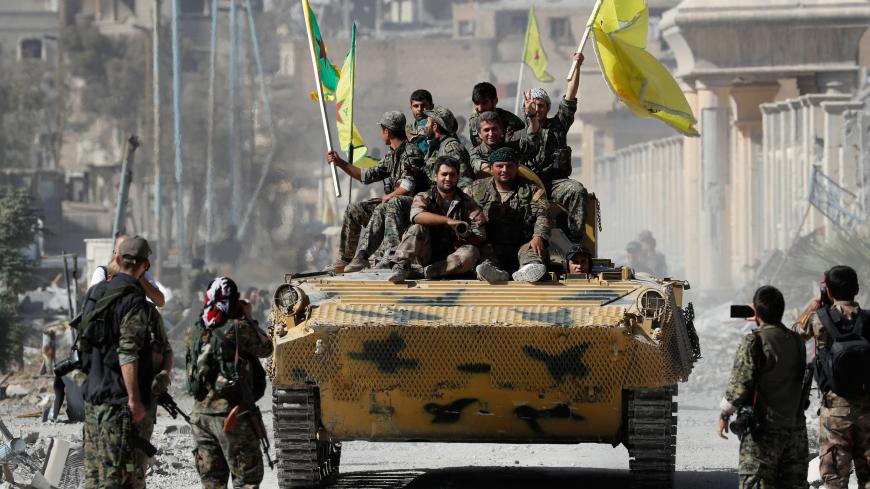 As US-backed forces take victory laps in the Islamic State’s (IS) self-proclaimed capital of Raqqa, the Pentagon is considering extending its presence deeper into Syria, a move that could bring US troops into contact with pro-regime forces.

Col. Ryan Dillon, a spokesman for the US-led mission fighting the terror group, told reporters that the international coalition is in talks with Syrian Democratic Forces (SDF) commanders about continuing the campaign into IS-held areas along the Euphrates River following today’s victory in Raqqa. He said the more than 600 US troops currently training and assisting the SDF won’t be staying in Syria “indefinitely,” but acknowledged that “there still is fighting that is left to be done.”

For now that fighting is taking SDF units straight to Deir ez-Zor, where an alliance of soldiers loyal to Bashar al-Assad, Russian troops and Iran-backed Shiite troops are trying to grapple territory back from IS and anti-regime rebels. And while the Pentagon is considering extending de-confliction agreements with Russia to cover a wider swath of Syria, former US officials say it will be difficult for the US military to avoid getting enmeshed in the politics of the wider war.

“You don’t want to deploy US forces willy-nilly and find them in the middle of conflict,” Robert Ford, a former US ambassador to Syria, told Al-Monitor. “It’s kind of a mission creep beyond going to get [IS]. They’re going to have to be dealing — as much as they don’t want to — with the politics of the Syrian civil war. It’s just unavoidable now.”

Dillon said the US-led coalition hasn’t heard anything from Russian forces about President Bashar al-Assad ending his tacit consent of the US troop presence in his country. After weakly protesting the US military operation as illegitimate and illegal since the beginning of Operation Inherent Resolve in 2014, however, the Syrian leader can be expected to make an increasingly forceful case as IS is eradicated. The US-led mission in Iraq and Syria ordered by then-President Barack Obama began three years ago.

"They’re going to have to be dealing — as much as they don’t want to — with the politics of the Syrian civil war. It’s just unavoidable now."

Pro-regime troops and US forces have already been coming into closer contact over the past few months; indeed, the United States shot down a Syrian drone and a Syrian Su-22 fighter jet headed toward US-backed rebels in June. Still, US and Russian officials have maintained communication through a de-confliction line that extends from Al-Udeid air base in Qatar to Moscow’s command posts in Syria.

The potential for conflict grows as the United States shifts its focus from IS to other foes, notably Iran and its proxies. During a gaggle with reporters on the way to US Central Command on Friday, Defense Secretary Jim Mattis said the Pentagon is “not changing” US military posture in Iraq and Syria from a counter-IS to a counter-Iran mission, but added that American officials “watch for Iran's destabilizing movements and activities everywhere.”

Yet the complexity of southern Syria, which some analysts worry could fall under Iranian control as a way for the Islamic Republic to solidify gains in the region, may incentivize the US to look toward rejiggering the anti-IS force.

“Iran is looking to solidify logistical supply lines across Syria and Iraq,” said Melissa Dalton, a former Pentagon official and now a senior fellow at the Center for Strategic and International Studies. “It certainly benefits Iran to try and build some connectivity between the Shia militias it supported in Iraq and Syria. There’s that added incentive for Assad to solidify those gains even if there’s some intersection with US forces countering [IS].”

With the United States looking down the contested Euphrates River Valley as a possible battle space, there’s a question of whether the American troops in the country or US-trained forces "can be transformed into a presence against Iran,” Dalton said.

“It’s very difficult for Assad’s government to live comfortably alongside regions that aspire to an autonomous status and can thumb their noses at Damascus,” Ford said. “I see no sign that the government is more willing to employ reforms than they were before. As [IS] recedes, the likelihood of conflict between the Syrian government and other Syrian entities increases.”

And it remains unclear if the United States and Russia will agree to an extended dividing line in the region, especially if US troops pursue a broader mission, such as stalling Iranian gains. Experts also worry that it could exhaust extended special forces operators that have been committed more broadly around the world in recent years as train-and-equip missions expand.

“How much risk is the United States willing to expose its forces to on the ground?” Dalton said. “Iranian forces haven’t hesitated to kill and maim US forces in Iraq.”

The Pentagon has also faced heat from Congress. Earlier this month, Senate Armed Services Committee Chairman John McCain, R-Ariz., refused to move ahead with confirmation hearings for Pentagon nominees until Mattis provided more details on the Donald Trump administration’s strategy in Iraq and Afghanistan. While McCain has backed off of that threat, it’s not clear Congress is happy with US strategy in Syria after the Raqqa campaign.

"For far too long, the United States has approached the Middle East through the narrow vantage point of counterterrorism,” McCain said in a statement today. “What we need instead is a comprehensive strategy that takes all regional factors into account — a clear articulation of our interests and the ways and means we intend to secure them. The absence of such a strategy is acutely felt even as we celebrate this important success."