The Pentagon is considering expanding its de-confliction agreements with Moscow as Bashar al-Assad’s forces and US-backed rebels both turn their attention to eastern Syria. 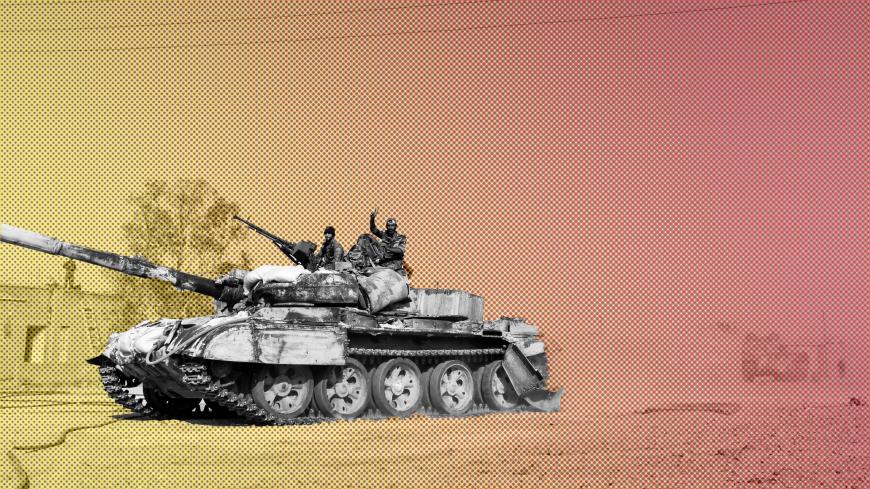 Members of the Syrian government forces raise the victory gesture as they ride on an advancing tank in the village of Kobajjep, on the southwestern outskirts of Deir ez-Zor province, Syria, Sept. 6, 2017. - GEORGE OURFALIAN/AFP/Getty Images

WASHINGTON — As pro-regime forces move to recapture the largest city in eastern Syria, the US-led coalition fighting the Islamic State (IS) is considering extending cooperation with Russia to avoid run-ins with its Syrian ally near militant strongholds.

Earlier this week, Syrian forces supporting President Bashar al-Assad began operations with Iran-backed troops to break a three-year siege by some 2,500 IS fighters in Deir ez-Zor, a critical thoroughfare on the Euphrates River. While the United States does not maintain diplomatic ties with Assad, a spokesman for Operation Inherent Resolve said the Pentagon could expand “de-confliction” agreements with Russia to prevent clashes with pro-regime forces.

“There is a de-confliction line that runs south of Taqba and goes all the way across … parallel to the Euphrates River, so that we can maintain our focus, both the Russians and the regime and the coalition … on defeating [IS]," Col. Ryan Dillon said in response to a question from Al-Monitor at a Pentagon press briefing on Thursday. As pro-Assad forces "move closer into the Middle Euphrates River Valley, like into Deir ez-Zor, and we de-conflict with the Russians … we'll continue to draw that line farther on down the Middle Euphrates River Valley, if necessary."

Washington and Moscow have used a de-confliction communications line that extends from a US base in Qatar to Russian command centers to warn one another of pending airstrikes in Syria, including a Russian cruise missile strike against IS from Mediterranean-based warships in June.

Under the agreement, the United States operates out of al-Tanf garrison inside a 35-mile radius in southern Syria, south of Raqqa province and parallel to the Euphrates River, to train vetted Syrian opposition fighters, supposedly without fear of reprisal from Russia or Assad. But the deal has faced pressure, with clashes between US and pro-regime forces prompting Russia to threaten to shut down the line.

In June, American forces shot down a Syrian drone and a Syrian Su-22 fighter jet headed toward the de-conflicted areas, the first air-to-air combat kill by the US military in nearly two decades. And this month, coalition officials said de-confliction efforts to get Russian help in separating civilians from an IS convoy recently stranded in the Syrian Desert by a US airstrike have not been successful.

Yet the pact has served Moscow’s interests, too, allowing the Kremlin to scale back its presence in Syria as pro-Assad forces have retaken major population centers in recent months. Still, it’s not clear that Damascus or Tehran will honor an expanded safe zone arrangement.

“Russia and the US are working on de-confliction zones and trying to prevent any major wars,” Ahmad Majidyar, a resident fellow at the Middle East Institute who studies Iranian military movements in the region, told Al-Monitor. “However, Assad and the Iranians may not agree to those sorts of arrangements.”

With the US-backed coalition estimating that as few as 6,000 IS fighters are preparing for a last stand in the Middle Euphrates River Valley between Iraq and Syria, Iran appears to be expanding its presence in the border region. Iranian Foreign Minister Mohammad Javad Zarif said in July that Iran has military advisers in both countries, with a recent uptick in casualties suggesting that Tehran has a large presence of both ground troops and allied Shiite militias.

Regime gains in Deir ez-Zor province, Syria’s second largest, could provide a boost to both Assad and Iran, experts say, allowing Damascus access to its largest oil fields and giving Tehran a chance to control the Iraqi-Syrian border and link up with Shiite militias fighting on the other side. These include fighters who participated in the recent liberation of Tal Afar from IS.

“Deir ez-Zor is the main route that would link up Iran and Syria,” Majidyar said. “That’s the strategic prize that Iran is focused on right now.”

Rapid deterioration of IS forces could hasten a US-Iran confrontation, Majidyar added, as both sides may race south to seek control of the al-Bukamal border crossing, a critical Iraq-Syria junction.

The United States isn’t ready to concede that prize, with the American-led coalition stepping up airstrikes on Deir ez-Zor in recent months. On Thursday, Dillon promised that the assault from above would continue, especially as US officials aren’t convinced that Assad-backed forces will remove IS from their holdings.

“Are they going to squeegee [IS] out of Deir ez-Zor and push them elsewhere?” he said. “Not if we can help it.”

Dillon said the Syrian Democratic Forces (SDF), the US-backed alliance of Arab and Kurdish fighters that have taken the lead in recapturing the IS stronghold of Raqqa, have forged partnerships with local tribes and will be ready to seize Deir ez-Zor. But some experts question whether the SDF will be motivated to help retake Deir ez-Zor, where local Arab tribes are on the front lines, unlike other Syrian battlegrounds where foreign IS militants struggle for control.

“It’s tribe against tribe,” said Fabrice Balanche, an associate professor at the University of Lyon 2 in France who is currently serving as a visiting fellow at The Washington Institute. “It’s not so easy to retake territory.”

And to take the fighting to IS fighters in Deir ez-Zor, the SDF will first have to finish retaking Raqqa. So far they’ve reclaimed about 60% of the area, chasing IS out of its sanctuary in the Old City and liberating a children’s hospital that served as a forward base for the group. The SDF is now engaged in block-by-block combat to retake buildings and an extensive network of tunnels that an estimated 1,500 IS fighters are using to resupply their effort.

“As far as Syria is concerned,” Trump said, “we have very little to do with Syria other than killing [IS].”