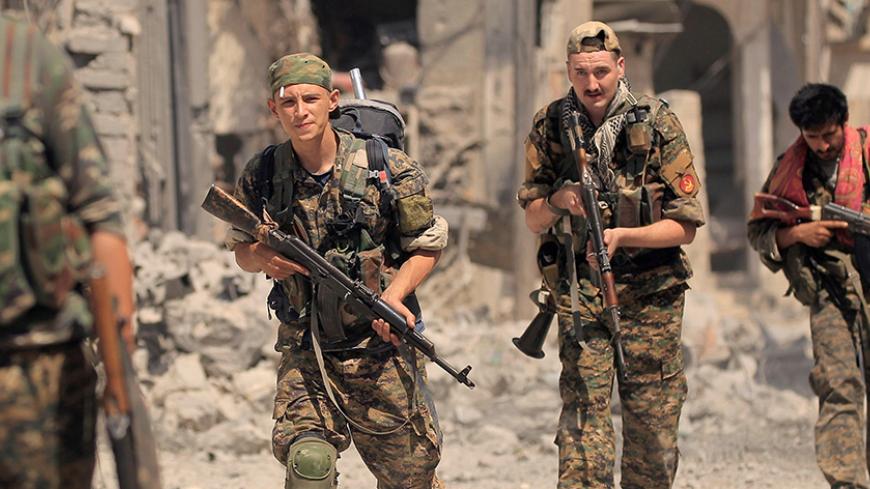 Separate contingents of the US-backed Syrian Democratic Forces (SDF) ringing the Islamic State (IS) bastion of Raqqa have converged, dealing another sharp blow to the surrounded militants.

Brett McGurk, the US special envoy to the counter-IS campaign, confirmed the news Thursday evening, tweeting that the move was a “milestone” that is “tightening the noose” around IS. Last week, SDF detachments fighting to take back control of the city from IS were just 300 feet apart, Pentagon officials said.

According to Col. Ryan Dillon, a coalition spokesman, the SDF has now claimed 50% of Raqqa. Dillon said the Arab-led Raqqa Internal Security Force that will be tasked with holding the city after its liberation now has 1,000 personnel.

“I would say that there are no safe havens in Syria where they can plot attacks safely,” Dillon said at a Defense Department press briefing on Thursday. “If they have headquarters, if they're planning, if they're conducting external operations, they do not have sanctuary in Iraq and Syria.”

The Pentagon’s military planners believe that surrounding the militants’ Old City stronghold will deal them a significant blow, stopping their escape to rejoin the fight elsewhere in Syria or plot terror attacks on foreign soil. The SDF advance, however, has slowed in recent weeks as irregular warfare tactics have prevailed in Raqqa, which sits on the northeast bank of the Euphrates River.

IS fighters have covered the ancient 3-mile Rafiqah Wall that surrounds the Old City with mines and improvised explosive devices (IEDs), putting the brakes on SDF attacks. The US-backed soldiers are now pushing into treacherous terrain where buildings, vehicles and even corpses are rigged with explosives, with up to 80% of SDF engagements featuring IEDs. Pentagon officials indicated that the multi-ethnic force, which numbers more than 30,000 fighters, suffered heavy casualties as it moved to encircle IS.

The push comes amid increasing confusion about future US involvement in Syria after the fall of Raqqa. The Donald Trump administration has made clear it is wary of US troops becoming enmeshed in the wider civil war that has rocked the country since 2011.

In fact, US troops conducting peacekeeping operations came under attack multiple times last week in the northern city of Manbij, where the coalition trains Arab fighters, Dillon revealed on Thursday. US forces are also conducting patrols with vetted Syrian opposition forces near al-Tanf garrison, where the anti-IS coalition occupies a 34-mile deconfliction zone to insulate US operations from Russian and other actors supporting Bashar al-Assad. Earlier in the summer, US fighter planes shot down a Syrian drone and a Syrian jet headed toward the area.

Yet the US-led campaign is showing no signs of abating. Last month, sources familiar with the Trump administration’s plans for the region told Al-Monitor’s Amberin Zaman that the anti-IS campaign will proceed into the middle Euphrates River Valley, a key strategic area in southern Syria close to the Iraqi border, even as Syrian and Iranian forces move into the region.