US airstrikes blocked the militants’ route to the Syrian war zone of Deir ez-Zor near the border with Iraq. 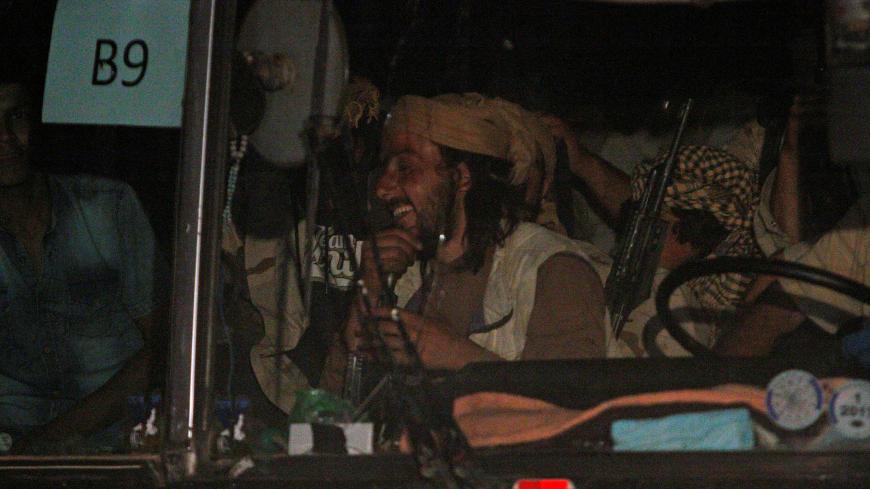 A convoy of Islamic State fighters and their families begin to depart from the Lebanon-Syria border zone, Qalamoun, Syria, Aug. 28, 2017. - REUTERS/Omar Sanadiki

US-led forces today bombed the route traveled by Islamic State (IS) fighters withdrawing from the Lebanese border under a cease-fire deal with Hezbollah, leaving them stranded in territory controlled by Syrian President Bashar al-Assad’s forces.

Some 300 fighters and their families were being bused to Syria’s IS-controlled Deir ez-Zor province near the border with Iraq under the agreement reached earlier this week. The airstrikes took out a small bridge and cratered the road through Syria, while also taking out another group of IS fighters on their way to meet the convoy.

“The coalition was not party to any agreement between the Lebanese Hezbollah, the Syrian regime and [IS],” Col. Ryan Dillon, a coalition spokesman, said in a statement. “Russian and pro-regime counter-[IS] words ring hollow when they cut deals with and allow terrorists to transit territory under their control.”

Dillon said the airstrikes did not hit the convoy itself, in accordance with international law, but had successfully halted the advance of IS fighters heading east between Hamaymah and al-Bukamal. The bombed road leads to the Iraqi border and the strategically important city of Qaim in the Euphrates River Valley, where Iraqi security forces are planning an offensive to clear the area.

“[IS] is a global threat; relocating terrorists from one place to another for someone else to deal with is not a lasting solution,” Dillon added. “This is just further evidence of why coalition military action is necessary to defeat [IS] in Syria.”

Lebanese Hezbollah struck a deal to evacuate the fighters and their families in exchange for the bodies of nine Lebanese soldiers captured by the group in 2014. Hezbollah leader Hassan Nasrallah defended the transfer, saying his forces would be the ones fighting the militants in Deir ez-Zor just as they had along the Lebanese border, but the United States and other critics of the deal worried about the militants’ potential to reinforce other fronts.

“Irreconcilable [IS] terrorists should be killed on the battlefield, not bused across Syria to the Iraqi border without Iraq's consent,” Brett McGurk, the State Department’s anti-IS envoy to Iraq and Syria, tweeted Aug. 30.

In the northwestern Iraqi city of Tal Afar, where the anti-IS fight moved to after an eight-month campaign to liberate Mosul, the Iraqi security forces have cleared 85% of the city — more than 360 square miles — in just 10 days of fighting.

Military commanders told Reuters on Aug. 30 that Iraqi forces are clearing Tal Afar block by block, as hundreds of militants have fled to al-Ayadiya, a small town nearby. The Shiite-dominated Popular Mobilization Units, which receive backing from Iran, have also participated in the Tal Afar fight.

Elsewhere, the US-backed Syrian Democratic Forces face a tougher fight to retake IS’ self-proclaimed capital of Raqqa, in northeastern Syria, where as many as 2,500 fighters are holding out in the Old City despite dwindling supplies and where some militants are relying on drugs such as amphetamines to keep themselves going.