Stranded by US airstrikes, IS fighters fleeing Lebanon retreat to Syria

The Pentagon says it will leave the militants alone if they don't try to link up with Islamic State forces on the Iraqi border. 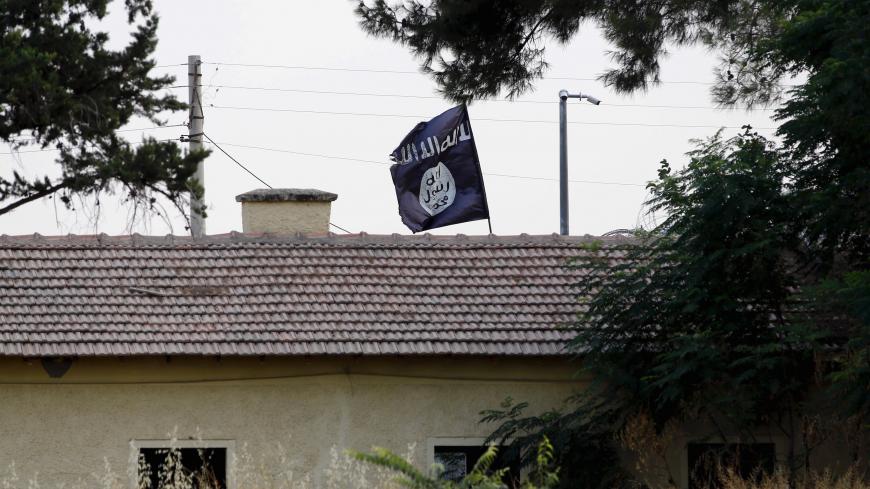 An Islamic State flag flies over the customs office of Syria's Jarablus border gate as it is pictured from the Turkish town of Karkamis, in Gaziantep province, Turkey, Aug. 1, 2015. - REUTERS/Murad Sezer

A group of about 300 Islamic State (IS) fighters halted by US airstrikes on Wednesday after retreating from the Lebanese border is heading back into the heart of territory controlled by President Bashar al-Assad of Syria, US military officials said today.

The militants were released by the Lebanese Shiite militia Hezbollah on Tuesday in exchange for the bodies of Lebanese soldiers and Hezbollah fighters captured by the group. They had been traveling toward the IS-controlled Deir ez-Zor province, where they had hoped to link up with IS fighters in Iraq. The US-led coalition fighting the group in Syria interrupted those plans Wednesday, cratering the road toward the battlefront with airstrikes.

“They actually started moving back toward the interior of Syria, and so we're just letting them go,” Lt. Gen. Stephen Townsend, who commands the US-led coalition in Iraq and Syria, told reporters at the Pentagon via video link from Baghdad. “If they try to get to the edge of [IS] territory and link up with [IS] there, we'll work hard to disrupt that.”

It’s not clear that the strikes will impact the Pentagon’s long-standing military-to-military relationship with the Lebanese Armed Forces, including the recent delivery of eight M2A2 Bradley Fighting Vehicles. As Lebanon has dealt with increased attacks from IS, the United States has bolstered weapons sales to its army, selling it six A-29 Super Tucano aircraft (which are designed for close support and counterinsurgency missions) as well as six Huey helicopters.

The State Department considers Hezbollah, which backed the deal to bus IS fighters into eastern Syria, a terrorist organization.

Townsend, who will pass the commanding role in the coalition to US Army Lt. Gen. Paul Funk and his Ft. Hood-based 3rd Armored Corps next week, said coalition forces had not struck the convoy directly, and that no women and children traveling onboard with the IS fighters had been harmed.

But the departing commander expressed frustration with the Assad regime in Damascus, which announced earlier this week that it had struck a deal with IS to allow the militants safe passage into eastern Syria.

Townsend did not elaborate on any further ways that the coalition might seek to limit the movement of the detachment of 300 IS fighters as they move back into Syria, saying he’d “prefer that [IS] find out about that when they make their attempt.”

The militants are attempting to reach an Iraqi front that looks increasingly bleak for the group. Iraqi Prime Minister Haider al-Abadi today announced the liberation of Tal Afar and the entire province of Ninevah in northwestern Iraq, completing an 11-day operation that was originally expected to take months.

Townsend attributed the quick fight in Tal Afar to weakening resolve from IS fighters after the grueling nine-month campaign in Mosul, as well as increasing isolation around Ninevah’s second-largest city, and a wave of precision strikes aimed at taking down the group’s leadership.

He told reporters today that between 500 and 700 militants had been killed or captured in the city, while another 2,000 fighters had retreated to villages north of Tal Afar, where up to 500 militants have already been killed. The US-led coalition said in a statement that Iraqi security forces have retaken more than 90% of IS-held areas.

US military commanders now expect IS leaders to make a final stand in the Middle Euphrates River Valley that straddles the border between Iraq and Syria.