Don’t expect IS fighters to flee en masse to Syria

The logistics of the battle for Mosul and beyond don’t point conclusively to the Islamic State taking the fight into Syria next. 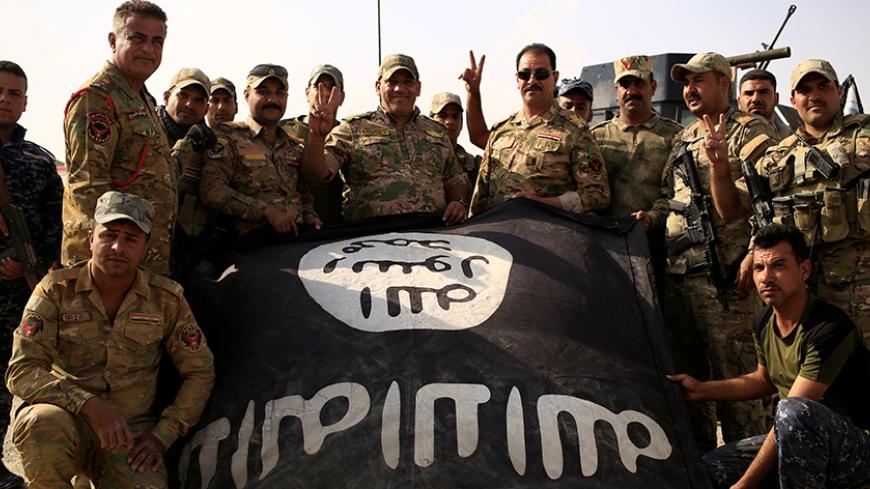 Iraqi soldiers celebrate as they pose with the Islamic State flag in the town of al-Shura, recently recaptured from the Islamic State, south of Mosul, Iraq, Oct. 30, 2016. - REUTERS/Zohra Bensemra

Since the multinational anti-terrorist coalition led by the United States launched an offensive on Iraq’s Mosul in mid-October, there has been no shortage of criticism from Moscow and Damascus. Russian diplomats and the military tend to downplay the coalition’s successes and emphasize its failures, claiming it’s frequently hitting civilian targets — something for which the West itself bitterly criticizes Russia and Syria.

But the most worrisome thing for Moscow — as Russian Foreign Minister Sergey Lavrov made clear after an Oct. 28 meeting with his Syrian counterpart, Walid Moallem — is the prospect of a large-scale movement of Islamic State (IS) fighters from Iraq into Syria. Russia Today, an English-language news site funded by the Russian government, cited undisclosed sources as saying American and Saudi intelligence services have an agreement to allow thousands of militants passage to Syria to prepare a further offensive on Palmyra and Deir ez-Zor, which are partly controlled by Syrian President Bashar al-Assad and allied Shia forces.

On Oct. 25, Lt. Gen. Sergei Rudskoi, head of the Main Operative Directorate of the Russian Armed Forces General Staff, stated that about 300 IS militants had arrived from Mosul to Deir ez-Zor.

These statements, however, carry more of a political message than a military posture. Moscow and Washington have been facing off in a battle for public relations superiority since the beginning of the Syrian war and are jumping at any opportunity to poke one another with reproaches and occasional threats. Moreover, after the start of the operation in Mosul, the coalition limited journalists’ access to the frontline, restricting their news feed to a trickle of official press releases. In Moscow, this was seen as an attempt to cover up the coalition’s losses while exaggerating its achievements and diminishing those of IS.

So far the biggest success of the coalition — as seen from Moscow — was the Iraqi army offensive on Oct. 26 in Mosul's Gogjali district, but the army was pushed back out rather quickly and is just now knocking at the door again. And IS hasn’t been completely cleared out of other major battlegrounds like Bashiqa, Kirkuk and Sinjar. Despite some statements in Russian government-affiliated media about the Iraqi army mopping up Ar Rutbah, sources on the ground who preferred to remain anonymous told Al-Monitor that about 200 IS fighters fled that city with no resistance, with Iraqi forces entering there a few hours later. In general, the situation in Anbar province, Salahuddin and Diyala is tense because of the constant raids of small, highly maneuverable groups.

Therefore, IS seriously hampered the distant approach of the offense not only though a mixture of activities on the frontline such as suicide bombers and car bombs, but also by beefing up its activities in the rear. They thus pushed the Iraqi army and the Kurds to direct their reserve forces to provinces neighboring with Ninevah, which slowed down the coalition’s movement. In this sense, the attack launched by IS on Oct. 24 on Sinjar was critical. It was meant to connect Syria and Iraq and to make it easier for some additional forces to approach Mosul through Tal Afar and Bara leading to Raqqa, Syria.

In Russia, it was largely seen as a CIA cover-up to help clear the road from Mosul to Syria for IS. However, if we look at the dynamics of the conflict strictly on its merits, the real reason behind this IS move was to secure a stronghold at Sinjar. It was supposed to enable IS to maneuver and rotate its forces. This tricky move bewildered many Russian and even non-Russian media, resulting in diverging interpretations in which IS has been either “led from Iraq into Syria” or the other way around.

In fact, sources on the ground suggest it was mainly families of terrorists who arrived in Raqqa, while the militants focused on transferring well-trained groups to Iraq. The Pentagon also said there is no intended push of IS from Iraq to Syria — a large-scale offensive on Raqqa has been announced, while airstrikes of the US-led coalition on the border areas between Syria and Iraq continue. Therefore, the coalition is looking to tie IS’ hands on the battleground in Syria while diminishing its capacity in Iraq.

This, of course, doesn’t mean that Moscow’s concerns are entirely groundless or triggered by the information struggle with Washington. A certain percentage of IS fighters have indeed moved into Syria, mixing with civilians fleeing Mosul and its surroundings as the coalition approaches the city. Yet this “exodus” is unlikely to be a large-scale one.

The flow of refugees from Mosul to Syria since the start of the operation is not significant: By Oct. 25, about 940 Iraqis had arrived in the Al-Hawl refugee camp, with a few hundred more expected soon. These territories are now under the close watch of the Kurdish People's Protection Units, which have extensive experience in filtering the incoming population. The majority of the civilians from Mosul will most likely be accommodated at 11 refugee camps, five of which are already functioning while the rest are being readied.

Another reason a large exodus isn’t expected is that, as previous experiences have shown, IS is not fleeing big cities immediately when attacked. Instead, it retreats after offering a ferocious resistance. Only after being bombed into the last neighborhood and after days of hard negotiations have they left towns, using civilians as a shield.

Baghdad and its allies will also be restricted by the need to minimize collateral damage. In addition to the ethics involved, massive casualties among civilians would potentially create an influx of new fighters to IS. Agreements with local Sunni groups, as well as the battle for their hearts and minds, would be of huge importance in ensuring the dissent doesn’t emerge in Mosul again once the city is freed.

Besides, taking Mosul under control as well as intensifying military action in Raqqa will inevitably lead to IS digging in at its so-called Wilayat al-Furat (Euphrates Province) between al-Bukamal, Syria, and Al-Qaim, Iraq, where the group has its survival infrastructure. Fleeing to Syria would be a trap for IS: From Iraq it could reach Jordan, Saudi Arabia or elsewhere, but there’s virtually no way out for it from Syria.

Finally, the Syrian army has so far been distant from IS in the west of the country — near the Kuweyres air base and in the Yarmouk neighborhood. Therefore, there is little need for the concern expressed by some Russian experts that IS fighters will emerge en masse in Aleppo. Besides, there can be no doubt that — should the United States and its allies launch a ground operation to capture Raqqa — Moscow and Damascus would also initiate a large-scale offensive to prevent the situation in the blocked Deir ez-Zor from getting more complicated and to make sure they, too, get their share of the victory. Otherwise, the Syrian territory will be split into halves and all the efforts to keep Syria united will have been for nothing. However, more and more players seem to be placing their priorities elsewhere, taking advantage of the situation by chipping away parts of the Syrian territory for their own interests.