The many dimensions of Mosul, and what comes next

There's much more at play in Mosul than a campaign for its immediate liberation from the Islamic State. 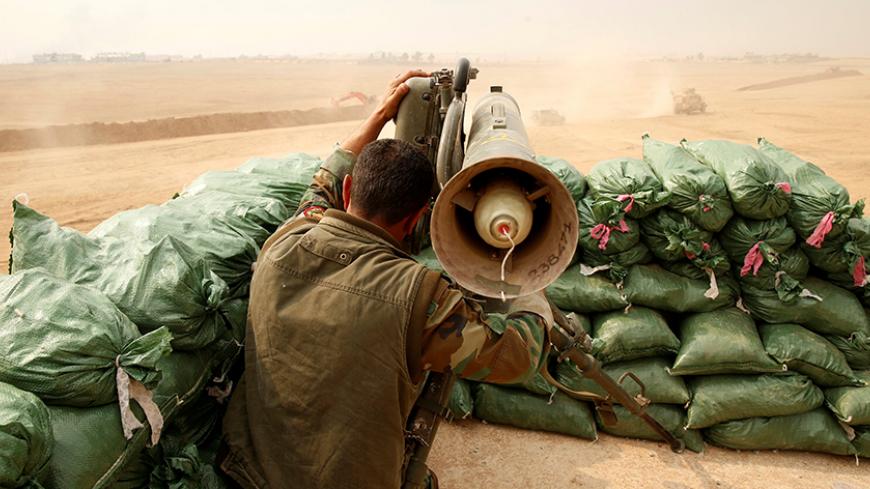 A Kurdish peshmerga fighter with a Milan anti-tank weapon guards against possible Islamic State suicide bomb attacks during a battle with IS militants at Topzawa village, near Mosul, Iraq, Oct. 24, 2016. - REUTERS/Ahmed Jadallah

The grand Mosul operation was launched Oct. 17 by Iraqi Prime Minister Haider al-Abadi, accompanied by a group of tough and decisive-looking generals. There was a flurry of activity, and now there is a lot of speculation, in addition to observations, about the current and future battle plans of the Islamic State, Syria, Russia and the United States.

In the first week of the offensive, about 30,000 Iraqi national army, Shiite militias and peshmerga elements, supported by an anti-Islamic State (IS) air coalition led by the United States, captured about 80 villages around Mosul, while about 6,000 IS militants counterattacked at different points.

The IS operation to infiltrate Kirkuk's center via Havika and link up with their sleeper cells in the city was the most important development of the Oct. 21-24 operations. That was followed by news reports that IS had counterattacked at Rutbah in Iraq’s Anbar province, not far from the country’s borders with Syria and Jordan. Then came news that an Oct. 24 IS attack against Sinjar, which dominates the vital road from Mosul to Syria, had been blocked by Yazidi forces supported by US Air Force fighters.

The pace of combat operations generally slowed in the next few days. The question everyone now asks is whether IS will resist in Mosul for months as it did in Fallujah and Ramadi, or will melt away without putting up sustained, heavy resistance.

First, a reality: IS seems to be acutely aware of the existential struggle it faces against peshmerga, Sunni Arab tribes of Ninevah province, Iraq’s national forces and Shiite militias. IS shows signs of launching a new wave of terror with counterattacks and vehicle-borne suicide bombings.

IS will likely try to create an ethnic-sectarian civil war in Iraq by sending suicide bombers to Shiite religious shrines and mosques and to disputed territories such as Kirkuk and those between Erbil and Baghdad.

An analysis of the first week of the Mosul operation showed that to delay enemy advances to Mosul's center, IS resorted to hit-and-run bombing attacks in surrounding villages. More than 20 vehicle-borne bombing attacks have been recorded in Mosul’s periphery since the operation's launch. To incapacitate the massing of coalition forces around Mosul, IS is distracting them with operations at Kirkuk and Rutbah, which no doubt have high prestige values. In short, IS appears determined to stay and fight.

Does that mean IS will fight to the last militant in Mosul? Or will it act rationally and disengage before it becomes too expensive? I believe that the IS military leadership adheres to rational military strategies, in contrast to its fighters on the ground, who are motivated by Salafi-jihadi ideologies with an apocalyptic vision. We saw how rational IS military commanders could be when, on Oct. 16, instead of trying to defend symbolically important Dabiq against a Free Syrian Army assault backed by Turkey, they withdrew toward al-Bab. The IS military command acted rationally during their defensive period from January to June, and they are acting rationally now when they are under heavy pressure.

If that is the case, what does rational military thinking call for at Mosul? That's simple: Defend as much as you can. Undermine the enemy’s offensive intentions. Dictate the pace. Make the combat static. Spread it over a long period to break the cohesion of the enemy, which already has the appearance of a motley collection. If there's a need to withdraw, don’t hesitate to regroup, get organized and hit back.

With that line of thinking, I believe IS will resist in Mosul as much as it can and then evacuate the city in phases and shift its main force to Deir ez-Zor and Raqqa in Syria or to Iraq’s Sunni-populated Diyala rural terrain.

IS doesn’t appear ready to concede Mosul easily. According to information I received from local sources, IS reinforcements are coming from Syria, and Mosul residents are prevented from leaving so that they can be used as shields against air attacks. There are also other indications that IS intends to fight hard for Mosul, such as executing about 60 prisoners and banning cellular and internet connections to the outside world.

Of course there is also the widely reported reality of hundreds of hardened IS combat positions fortified by roadside bombs, tunnels, snipers and suicide bombers.

If IS militants cannot end the Mosul siege with their resistance, they will shave off their beards, mix with the civilians and foreign militants, and withdraw to other locations to regroup. Diyala rural terrain, with its desert features and hills, provides an ideal location to regroup. In a CTC Sentinel article, Alex Mello and Michael Knights predict that IS militants leaving Mosul are likely to use the Diyala region as an assembly point in Mosul’s periphery to reorganize.

If IS loses Mosul, then Syria, Iraq and the rest of the world must be ready to deal with the phenomenon of an IS without a state and with an ever-shrinking territory. In my Nov. 20, 2015, column titled “Is the Islamic State going global?" I emphasized that there is a split in IS between "localists and globalists" over the group's defensive posture. More recently, in a July 14 column titled “Is the Islamic state planning a cyber-caliphate?” I drew attention to increasing IS propaganda activities in neighboring countries such as Jordan and Turkey following losses of territory in Iraq and Syria. My point was that the globalists in IS are likely to shift their activities to Turkey, to train and export cells to other countries.

It is likely that if it loses Mosul, IS will alter its combat strategy and go underground, boost its propaganda operations in cyberspace and shift its training activities to Jordan and Turkey while mounting terror acts to send the message “We are still strong.”

Finally, if IS loses more strength and becomes more of an underground terror organization, it can become a major proxy in the developing US-Russia power struggle in Syria and Iraq.

The United States sees that with the involvement of Russia, the Syrian army has performed better than anticipated in its operations and is about to reach the end of the battle at Aleppo. To exhaust the Russian military and economically degrade it, the US may opt not to annihilate IS in Mosul but to let it withdraw to Syria through Mosul’s west flank, which was left open. If this scheme works, then the IS fighters who regroup at Raqqa-Deir ez-Zor may form a defensive line that will prevent Syrian President Bashar al-Assad's forces from crossing east of an Aleppo-Palmyra line.

In short, the United States, by allowing IS militants to withdraw to Syria from Mosul, may be hoping to use that organization to erode the military gains of Russia and the Assad regime.

Syria and Iraq are on the verge of becoming a hot front in the global struggle for power between the United States and Russia. One cannot help but wonder whether the United States is redesigning a new Afghanistan in Syria to militarily and economically exhaust Russia.