The Islamic State's loss of territory in Iraq and Syria is accompanied by opponents' cheers of a military victory — but is it really victory? 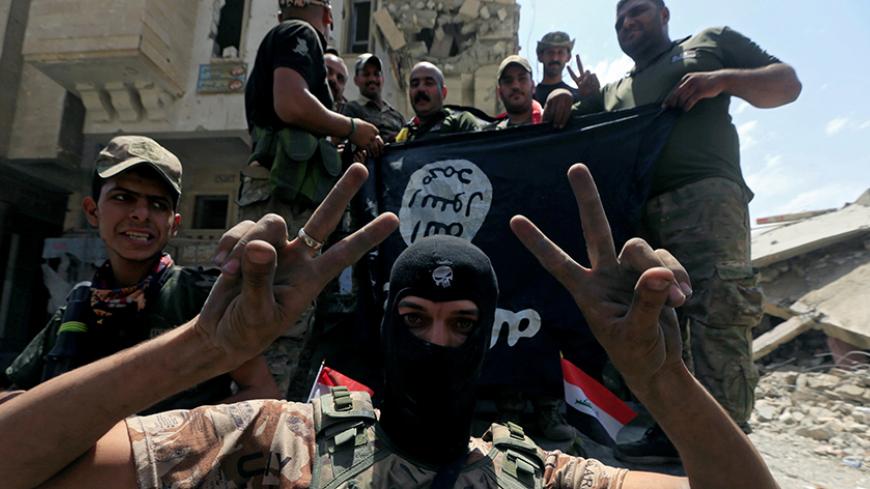 Members of the Emergency Response Division celebrate victory over the Islamic State in the Old City of Mosul, Iraq, July 8, 2017. - REUTERS/Alaa Al-Marjani

As Mosul was liberated last week from the Islamic State (IS) after a yearlong military struggle, Iraqi Prime Minister Haider al-Abadi defined it as the “collapse of the IS caliphate and a grand military victory.”

But a million-dollar question still lingers: How does the government translate this military win into a sustainable political victory that will bring peace, prosperity and justice to Iraq? Minds are generally clear on what to do with IS, and why, but answers to the “how” questions are still not easy.

IS created major waves of violence, harrowing security issues and billions of dollars' worth of economic losses in Iraq for three years. The country's already-fragile social structure was further damaged and ethnic/sectarian tensions became even more sensitive.

Baghdad’s central authority and its representation of the country as a whole weakened. New questions arose about relations between Baghdad and the Kurdistan Regional Government (KRG), while countries such as Iran, the United States and Russia stepped up their influence on Iraqi politics.

Iraq extensively used the media to illustrate how the government has restored confidence in its national army with successful anti-IS operations in Anbar and Ninevah provinces. But independent observers say that, especially in Mosul, the situation is not very promising. Executions without trials, cruel treatment of people moved out from the city, unexplained losses among detainees, angry graffiti promising revenge, and social media comments are inflicting new wounds in the collective memory of Sunni Arabs. Although it is generally said that Mosul's civilians didn't participate in IS' cruelty, Sunni Arabs of certain age groups are being treated as the "usual suspects." Social peace is strongly endangered.

As IS was a territorial entity in Iraq and Syria, the struggle against it was carried out with conventional military thinking. The goal was to wipe out the group's so-called state structuring. To keep IS from setting up a state, opponents had to eliminate its revenue sources, destroy its military capacity and target its leadership and institutions. Its military capacity came under intensive pressure on multiple fronts from the beginning of 2015: The United States supported Baghdad, Erbil and the Syrian Kurds' Democratic Union Party (PYD); Iran backed Baghdad and Damascus; Russia helped Damascus; and Turkey worked with the Free Syrian Army (FSA).

In other words, pure military measures have been used to keep IS from existing as a strong, solid entity and to reduce it to marginal status. It can then be taken on with anti-terror actions instead of a military campaign.

The basic tenet of this conventional strategic thinking was to produce “simple solutions,” one of which was to find an ally in the field, arm it, give it air support and let is fight IS. Another simple solution was to find and kill thousands of foreign fighters who had joined IS in Iraq and Syria. But everyone was aware that killing extremist Salafi-jihadi foreign fighters in the field also provided ample fodder for heroism sagas in Afghanistan, Chechnya, Iraq and Somalia — the states that provided the most IS recruits.

In combat against IS, Kurdish ethno-nationalists and armed Shiite militias emerged as local partners. The anti-IS coalition still relies on Kurdish ethno-nationalists to handle Raqqa and on Shiite armed mobilization to deal with the situation in Mosul. But now another crisis looms: How can the world eventually diminish and then, in a coordinated and synchronized fashion, eliminate the threat that Sunni/Salafi, Kurdish ethno-nationalist and Shiite armed groups could mobilize to fill the vacuum left by IS, thereby posing an existential threat to Iraq? Baghdad and Damascus cannot possibly overcome these nonstate mobilizations on their own. That would require US and Russian cooperation in the field, but the power struggle between those superpowers won't allow for that anytime soon.

Moreover, the military strategy against IS seems to be concealing two other important questions: How has IS continued to resist, right down to the last streets of Mosul, even though it has lost much of its military power in the past three years? How many suicide attackers are still dedicated to their cause?

Although IS has lost some critical territory and revenue resources in Iraq and Syria, we're not seeing any significant deterioration of its organizational structure. When IS expanded territorially it became an easy target, but now that it is reverting to its ideological roots and going underground, it will be tougher to find and eliminate in Iraq and Syria. However, as IS shrinks, the divergences between globalists and localists in its ranks will become more pronounced.

As I wrote in November 2015 (“Is the Islamic State going global?”), it's increasingly difficult for IS foreign fighters to remain in Iraq and Syria. And while the elite IS leaders are generally fully loyal to the organization, many of the foot soldiers have been jumping to more moderate, but still extreme, Salafi/jihadi organizations. We will now watch and see if these fighters will become more moderate in line with their new outfits, or if they will radicalize the groups they've joined.

The Salafi/jihadi networks currently active in the region are linked to, or inspired by, one of four categories of groups: IS; al-Qaeda or Jabhat Fatah al-Sham (formerly Jabhat al-Nusra); less extremist Islamist groups such as Ahrar al-Sham that represent a bridge between hard-liners and more moderate Islamists; or​ comparatively moderate, armed Sunnis/Salafis.

I believe IS is hard-pressed in Idlib and Raqqa in Syria and in Anbar in Iraq. IS may shift its weight to the area between Deir ez-Zor and western Anbar. Ideological and organizational boundaries between the above four categories will become more obscure. In this process, the evolution of groups such as Ahrar al-Sham — which has one foot in the radical camp and the other in more moderate groups — must be watched carefully.

Although today IS may well be on brink of collapse as a war machine and quasi-state, it is probably stronger than before in cyberspace and propaganda machinery. That is, sadly, why the declarations of military victories remain half-baked.