Will the Islamic State survive 2016?

The Islamic State's loss of territory has some experts predicting its demise, but are we sure? 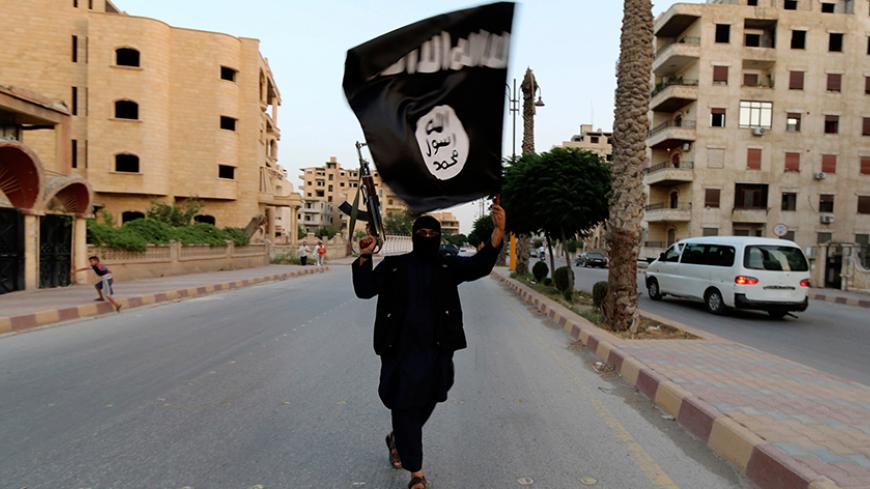 A member loyal to the Islamic State waves a flag in Raqqa, Syria, June 29, 2014. - REUTERS/Stringer

Following spectacular combat gains for two years, the Islamic State (IS) is on the defensive in Iraq and Syria. In 2015, IS lost 14% of the territory it once controlled. It has lost another 8% in just the first three months of this year, according to a new study from IHS Jane's 360.

If IS continues to lose territory at the same pace, some people believe the year 2016 could well be its last. But experts are maintaining a cautious optimism in agreeing with this prediction, which is frequently voiced by Iraqi decision-makers.

Jacob Zen of the Jamestown Foundation, which closely follows IS activities in the Middle East and Eurasia, says IS might make it to the end of 2016, but most likely only as a shadow of its current self.

“I expect IS will be able to still hold out at Mosul and Raqqa in 2016, because the attention of international and Syrian counter-insurgency forces is primarily devoted to resolving other issues, such as in northwestern Syria, where Afrin province is hotly contested. But at some point in the near future — perhaps next year in 2017 — I expect that a range of international forces, and Iraqi and possibly also Syrian forces, will finally commit to removing IS from Raqqa and Mosul. At that time, I do not think IS will have the power to defend those cities, even if its militants are able to put up a strong defense,” he told Al-Monitor.

“The loss of these two cities will likely lead to some IS members defecting back to al-Qaeda" as they realize that the latter was correct in predicting that IS leader Abu Bakr al-Baghdadi proclaimed the IS caliphate prematurely, before IS was strong enough to sustain the territory. Defectors might conclude that al-Qaeda leader Ayman al-Zawahri's gradual approach "is the more effective way to create a sustainable caliphate,” he added.

What do field developments show? IS, without putting up much resistance, has pulled back to Raqqa and Deir ez-Zor by resorting to a flexible defense of low-intensity clashes instead of fighting in the towns. But IS aims to maintain its dominance without abandoning more territory. However, by relying on vehicle-borne suicide attacks and counterattacks, IS is clashing seriously with the Kurdish People's Protection Units (YPG) and the forces of Syrian President Bashar al-Assad in northern Syria while it seeks to gain some time without major combat.

Although IS has lost the bulk of the personnel, logistics and financial support it had been getting via Turkey and Jordan, it has a strong Sunni base in Syria and Iraq. Despite its losses of territory, IS still rules over a lot of land and a population of about 6 million.

Whether IS will still be around at the end of 2016 depends on the combat strategy it will have to confront. As the Jamestown Foundation's Zen stressed, terminating IS requires determining the most vital issue of any anti-insurgency. Will combating IS in 2016 be enemy-centric, sort of swatting at mosquitoes, or population-centric, which means draining the swamp? Is the idea to dislodge IS from cities such as Raqqa and Deir ez-Zor in Syria and Mosul in Iraq with high-paced offensives and eliminate its physical presence, or is it to isolate these towns with tight sieges and wait for their population to distance themselves from IS over time and thus break the will of IS to continue with its struggle? The answer to this vital question is not yet visible on the ground.

If the first option is selected, the short-term outcome could be positive. But if the post-IS reconstruction and political integration is not properly handled, an IS 2.0 could emerge and the entire world could pay heavily for it. This is why eroding the popular support for IS over two or three years could be more effective. Here, of course, the question is whether the main players such as the United States and Russia have the strategic patience for such a long-term approach.

Then there are the increasing fissures within IS.

The main fissure is between those advocating spreading the struggle globally to overcome the pressures IS is under in Iraq and Syria, and those preferring a localist approach of standing firm in Syria and Iraq. This fissure is bound to widen as IS comes under heavier pressure in Iraq and Syria. The IS attack Jan. 12 against German tourists in Istanbul’s Sultanahmet and the March 19 suicide attack against Israeli tourists at Istanbul’s Taksim could well be interpreted as a move toward the globalist approach, to spill the clashes over to Turkey. By telling Turkey, "If you get tough against us, you will pay the price," IS is also trying to divert attention from Iraq and Syria.

To sum up, it could be misleading to apply a pass-fail criteria based on loss of territory. The approach to IS should be a population-centric strategy that aims to slowly erode its popular support, which may take years. The endgame of this struggle should be reintegration of Sunni bodies to political processes in Iraq and Syria, first at local and then at national levels. This is what the current situation in the field, Iraq’s experience of the past 10 years and Syria’s crisis of the past five years tell us.

This is why in 2016 we may face an IS that lost some of its prowess as a war machine and has shrunk as a quasi-state organization. Similarly, the formidable propaganda power of IS will lose some of its effectiveness. But IS’ ghost will continue to exist in the region as a mentality. Such a ghost may always find new life in any part of the Muslim world where religious and sectarian fault lines prevail. It may still resort to spectacular operations, especially in Europe and Turkey, to be able to boast, "We are still formidable."

This is why it is not wise to predict the demise of IS so soon. A more realistic approach would be to forecast a years-long struggle of the international community with IS.