Turkey plans to divide its Syria operation into three phases and coordinate them with diplomatic work. 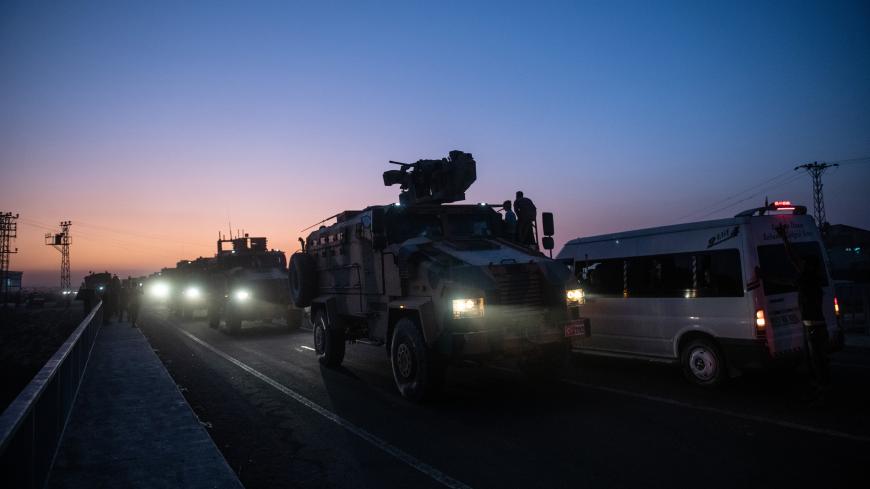 What is Turkey's game plan in Syria? After amassing a major array of fighters and military equipment into combat formation on the 80-kilometer (50-mile) line between Turkey’s border towns of Akcakale and Ceylanpinar, President Recep Tayyip Erdogan launched the incursion Oct. 9 into Syria's Kurdish northern region.

The attack began soon after the United States withdrew 50 special forces personnel who had been patrolling between Syria’s Tell Abyad and Ras al-Ain.

Ankara has divided its operation into three phases. In the first phase, it will establish three to four battalion-size military bases on high ground covering some 5-8 kilometers (3-4 miles) of road parallel to the border. As 155 mm Turkish artillery howitzers and multiple rocket launchers will provide indirect fire support for the advancing Turkish troops, there's no need for close air support — making the first phase relatively simple.

The Kurdish People’s Protection Units (YPG) aren't expected to resist, as they earlier destroyed ditches and barricades before withdrawing.

One question about this operation is whether the Turkish military backed by the SNA will remain in rural terrain as agreed upon with the United States, and abide by the US-set rule of not entering urban settlements. If Turkish units try to enter town centers such as Tell Abyad, Ras al-Ain and Aziziyah, we can conclude that Turkey has abandoned that game plan and is unilaterally implementing its own.

If that happens, urban clashes are inevitable but aren't likely to be highly intense. If there is strong resistance, Ankara will rely on about 100 TB2 armed drones and 12 ANKA armed drones it mobilized in Afrin, Syria, last year, and its reliable 155 mm Storm howitzers. Turkish forces can easily cope with low-intensity threats without counting on close air support from F-16 jets and T129 attack helicopters.

Ankara doesn’t seem to be in a hurry to advance southward, and could wait until after the Nov. 13 summit between Erdogan and US President Donald Trump in Washington. In other words, Ankara will employ a wait-and-see strategy for three to four weeks while assessing the YPG's field performance and the reactions of Washington, Moscow, Tehran, Damascus, Baghdad and Erbil (the Iraqi Kurdistan capital) in the diplomatic arena.

The second phase will involve moving the brigades waiting in the rear through the first-phase Turkish units and the SNA. Those brigades will cross over the first echelon to advance deep into the south and the SNA will open a new front eastward from Manbij. The two prongs will impose control over the M4 highway area that includes the towns of Ain Issa, Tal Tamr and Hasakah.

Ankara decided on this operation about six months ago. Since then, the Turkish military no doubt has been engaged in extensive target analysis. Turkey now knows precisely where its foe's heavy weapons are, critical YPG operational and communication centers, positions and tunnels. But this is a region the 40-kilometer (24-mile) range 155 mm howitzers can't reach and the advancing forces will need close air support from F-16s and T129 helicopters, as well as helicopters for medical evacuations and critical logistical missions.

Will the United States in this phase open air space to Turkish flights? We know from official announcements that the US Department of Defense had allowed Turkey's involvement in previous anti-IS air actions. The US Air Force has now excluded Turkey from the air planning of Operation Inherent Resolve, the coalition's operation against the Islamic State (IS).

Yet as of Oct. 10, Turkish F-16s have still been able enter Syria's airspace, meaning — assuming the Turkish air force isn't likely to risk entering that banned air space unilaterally — that there was still aerial coordination between the United States and the Turkish military.

At this phase, close air support for advancing Turkish armored columns is essential. During Turkey's operation in Afrin, from January to March 2018, the Russian air force controlled the operational tempo by opening and closing the air space to Turkey.

What will the US Air Force do now? In this phase, as Erdogan described in his recent UN General Assembly speech, a safe zone means controlling an area stretching 30 kilometers (19 miles) deep by 480 kilometers (300 miles) long, basically north of the M4 highway.

In the final phase, for 2 million refugees to return to Syria, adequate settlements will be built in an area expanding south toward Raqqa on the northeast bank of the Euphrates. In this third phase, the YPG is likely to give up all its territorial ambitions in northeast Syria and abandon resistance.

The YPG will hold the United States responsible. Before giving up, the YPG will shift most of its fighters northward from Deir ez-Zor. This would weaken the US position against the Russian-backed forces of Syrian President Bashar al-Assad, pro-Iran militias and remaining IS cells.

Some readers might think that since the Turkish military hasn't been able to defeat the outlawed Kurdistan Workers Party (PKK) for four decades, perhaps the PKK-affiliated YPG stands a chance. I don't share this view for the following operational reasons:

The Ocalan factor: Ankara may recruit imprisoned PKK leader Abdullah Ocalan to call for a halt to fighting against the Turkish army in Syria.

Terrain and weather: The PKK has always taken advantage of harsh weather and terrain for its guerrilla warfare, but in northeast Syria there are no mountains and winter is relatively mild.

Demography: For the PKK, northern Syria presents ethnic, sectarian and tribal challenges, more so than it faced in Kurdish-majority parts of Turkey and northern Iraq.

The US military has been desperately in need of YPG’s conventional military capabilities in northern Syria to fight against IS leftovers, to control Russian-backed Assad forces, to contain pro-Iran militias mostly nested in oil-rich Deir ez-Zor and for border security in the east with Iraq. The United States can't allow the YPG to go underground and become an insurgency. Clearly the second phase — and especially, if the US allows it, the third phase — will be extremely complicated.

How will this operation affect the area west of the Euphrates? How will Russia, Iran and Assad react? At the Ankara summit in September, Iran and Russia were silent and in a way gave a green light to Turkey. Now they are recalling the 1998 Adana Protocol between Ankara and Damascus that restricted PKK activities in Syria, and will want Ankara to get in touch with Damascus quickly to exploit this operation as the facilitator to start negotiations between the two capitals. This pressure on Ankara to contact Damascus is bound to intensify.

As the priority of Russia and Iran is to remove the entire US military presence from Syria, they will stick to a wait-and-see policy for now, but they are likely to attempt mediation between Ankara and the YPG.

In the coming days, Ankara will shift its intelligence and SNA assets from west of the Euphrates to the east, with the intent of leaving only radicals in the Idlib area, thus justifying tough action by Russian-backed Assad forces.

As for the domestic front, we should expect some medium to large protests in Kurdish-majority cities in Turkey’s southeast and big metropolitan areas. But authorities already have those towns under tight control, so the protests' impact will be slim. One should also note that Turkish popular support for this operation is very high, making it a good instrument for Erdogan for domestic political consumption.

YPG could easily conduct some anti-tank guided missile attacks and vehicle-borne or roadside bomb attacks against military targets in Turkish border towns during the initial phase of the Turkish operation. Yet I don't think these would be enough to dissuade Ankara.

I have been predicting for two years that a clash between the Turkish army and the YPG is unavoidable east of the Euphrates. Turkey has initiated the operation, but the end will not be up to Ankara. Ankara will be squeezed tight between the United States and Russia. The latter two initially will decide how the operation progresses, how violent it will be and its pace. Then it will be up to Assad, Tehran, Baghdad or Erbil. The field realities will be determined by the choices of others' actions, more than by the military prowess of Turkey and the YPG.

It is clear that military strength will be important but won't be the final determinant. The inevitable question therefore is: How far is Turkey willing to march through this dark tunnel full of uncertainties with no time limits?