Operation Peace Spring: What is Turkish army's next step?

As Turkey’s operation in northeast Syria enters its fifth day, the center of gravity of the operation shifts toward the west. 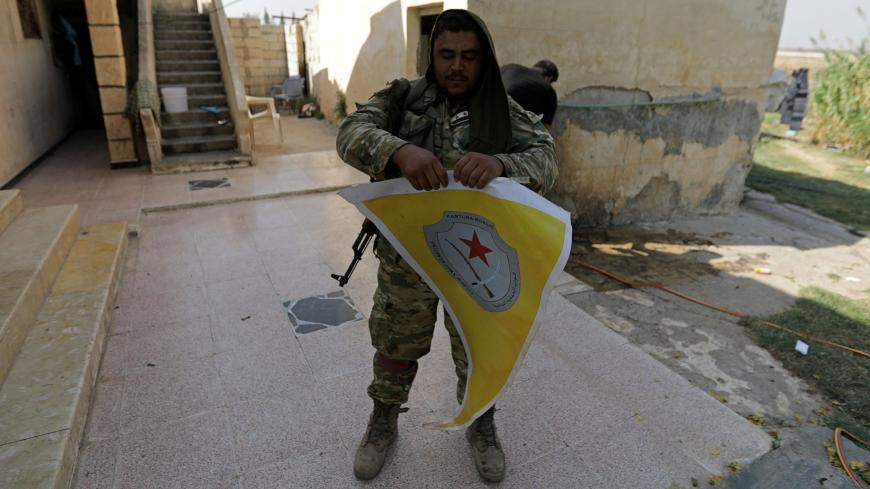 A Turkish-backed Syrian rebel fighter tears a representation of the flag of the Kurdish Self Defense Forces in the town of Tell Abyad, Syria, Oct. 13, 2019. - REUTERS/Khalil Ashawi

At 4 p.m. local time Oct. 13, Turkey’s Operation Peace Spring in northeast Syria entered its fifth day. The pace of the operation has been very low compared with Operation Olive Branch of January-March 2018.

Operation Peace Spring has reached the strategic M4 highway that connects northeast Syria to the rest of the country and that has become the center of gravity between Tell Abyad and Ras al-Ain. The town centers are now under Turkish military control.

First indications show that the operation is not spilling over to the south of M4 highway or toward the Hasakah-Qamishli area in the east; it appears to be proceeding westward to the Kobani-Manbij line.

The Kurdish People’s Protection Units (YPG), in response, are avoiding intense clashes with the Turkish forces and acting cautiously. The YPG is the Syrian extension of the Kurdistan Workers Party (PKK), which is listed as a terrorist group by Turkey and much of the international community, including the United States.

There are four fronts of Operation Peace Spring: First is the military front on the ground, particularly developments unfolding in the Tell Abyad-Ras al-Ain-M4 rectangle. Second is the optics front: the perceptions of millions closely watching the operation in the United States and European countries are important. Third is the diplomatic front mainly shaped by the strategic preferences of capitals having stakes in northeast Syria such as Damascus, Washington, Moscow, Tehran, Jerusalem, European capitals, Baghdad and Erbil. Fourth is the domestic political front in Turkey.

One should first note that the operational effectiveness of the Turkish army and its Syrian National Army (SNA) allies alone will not be sufficient to shape the outcomes desired by Ankara.

The diplomatic efforts and actions of other actors having stakes in Syria will have impacts over outcomes. Most importantly, the ongoing propaganda war to gain the hearts and minds of US and European public opinion will be decisive.

Within this context, Ankara has to win a military victory in the field, a resounding diplomatic success at the table and an optical victory in the eyes of Western public opinion. But Turkey's reliance on military prowess and destruction for a victory on the battlefield risks losing the optics war.

For Ankara, the greatest dilemma of the operation is to score simultaneous achievements. The Turkish government so far is focusing on the military front to ensure support on its domestic front.

The current picture of the operation can be summarized in various chapters:

Tell Abyad-Ras al-Ain-M4 Highway (central sector): The center of gravity of the ground operation is here. Currently some 6,000 soldiers and 2,000 SNA fighters in this area are seeking to consolidate their control and attempting to expand to the western sector. Now the Ras al-Ain town center is under full control. The Tell Abyad town center is nearly under the control of the Turkish army.

On Oct. 12, around noon, some SNA units reached the M4 highway, but Turkish units have not reached there yet. This shows that Ankara is not in a hurry to expand southward. Now it is time to watch the course the Turkish military follows to reach the highway.

Turkish troops and the SNA are also trying to expand their control to the south to have full control of this 30- to 80-kilometer (some 19 to 50 miles) area between Tell Abyad-Ras al-Ain-M4 pocket.

Will the Turkish military cross M4 highway? It is too early to answer before Turkey fully controls the M4 highway. But if Ankara decides to cross M4. Then the direction of troops is very important. When analyzing the troop movements, one may suggest that the troops in this sector are now heading to the west, meaning that Kobani and Manbij would be the next targets. The reports about the withdrawal of US troops from Kobani and about the deployment of military engineering units to erect a military bridge to cross the Euphrates are two clear indicators of Ankara’s inclination to expand the operation to the western sector.

Kobani-Manbij sector (west sector): It is highly likely that this will be the second sector to be targeted by Turkish military and the SNA units. Currently there are some 4,000 SNA fighters and a Turkish brigade in the Manbij region waiting to engage and to expand to the east. Their aim is first to take control of Manbij, then cross the Euphrates and capture Kobani. Armed clashes between the parties have already begun in this sector and there has been heavy exchange of artillery and rocket fires between the YPG and the Turkish military.

Qamishli-Hasakah (east sector): Fierce artillery and rocket exchanges between the Turkish military and the YPG in this sector are highly likely in the future. But for now, this sector is still stable, indicating that the east sector is Ankara’s highest priority.

It is safe to assume that Ankara will decide what to do here is after negotiations with the Americans. Ankara has already opened a front in northeast Syria as a coercive diplomatic instrument so as to gain leverage when bargaining with Americans and will now sit at the bargaining table with a stronger hand.

Diplomatic front: The planned Nov. 13 meeting between President Recep Tayyip Erdogan and President Donald Trump in Washington is a sign there’s a sort of agreement between the two leaders, details of which have not been revealed. Trump’s reluctance to slap sanctions against Turkey is more proof of this agreement. So the YPG’s political wing, the Democratic Union Party, has been in contact with both Moscow and Damascus. Now that the Kurds and Damascus have come to an agreement, I do not think that Ankara will dare to open a new front against Assad forces.

One more and perhaps one of the most important objectives for the YPG is to muddy the diplomatic waters between Turkey and the Western world.

Official sources who have close knowledge about the course of the events in the field told Al-Monitor that the YPG hopes to create a chaotic situation in which Turkish soldiers or the SNA might engage with American soldiers and/or to open a front between Assad forces and the Turkish military and the Turkish-backed SNA. particularly in Manbij. These two objectives show that diplomatic front will be harder to manage for Ankara when it comes to moves toward the western sector.

Other questions worth mentioning include the following: What will happen if the Turkish military dares to cross south of M4 highway and attempts to expand deeply in southward and southeastern directions? What will the Trump administration do if civilian casualties increase due to Turkey’s offensive and if alleged extrajudicial executions, kidnapping and lootings by SNA prove to be right?

One of Trump’s tweets Oct. 13 was particularly meaningful. “Do you remember two years ago when Iraq was going to fight the Kurds in a different part of Syria. Many people wanted us to fight with the Kurds against Iraq, who we just fought for. I said no, and the Kurds left the fight, twice. Now the same thing is happening with Turkey,” he tweeted.

Optics/propaganda front: This front is about the legitimacy of the operation in the eyes of the international community, particularly in the Western world. Paradoxically, the more Ankara scores military achievements on the ground, the more Ankara loses on this front.

The SNA does not consist of well-disciplined forces. They record and share all what they are doing on social media, which is not beneficial to the legitimacy of the operation.

Also, the YPG is very astute in creating fears of possible jail breaks by Islamic State fighters who currently are kept in YPG prisons.

We can be sure that the YPG’s propaganda campaign to gain Western public opinion will increase as the Turkish operation expands.

The impact of the footage of execution of female Kurdish politician Hervin Khalaf and her driver and two guards Oct. 12 on the M4 highway by SNA fighters is a good example of this.

The SNA forces’ kidnappings, looting and executions may cause Ankara to lose the propaganda war.

It seems that unlike other cross-border operations in Syria, Ankara has to simultaneously win militarily, diplomatically and optically this time.