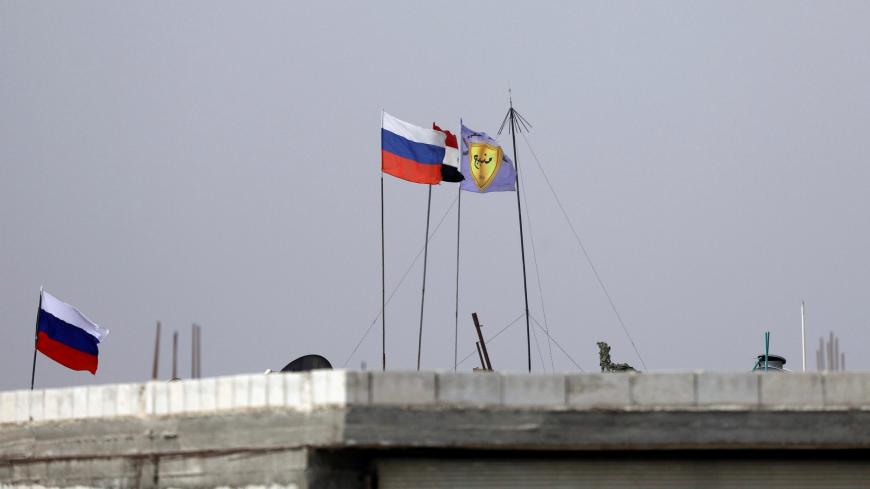 There are four fronts of Operation Peace Spring: the military front on the ground, diplomatic front, the optical front (in the eyes of Western public opinion and the international community) and the domestic front.

The operational picture on the ninth day of incursion as of Oct. 17 is: The Turkish army and the Turkish-backed Syrian National Army, in a coordinated operation, secured the control of a 100 kilometer by 30 kilometer (62 by 19 mile) area between Tell Abyad-Ras al-Ain and the M4 highway. That corresponds to about 20% of the 35-kilometer deep zone Turkey wants to control between Manbij and the Iraqi border.

At the moment, apart from minor armed skirmishes at Ras al-Ain, the central sector is static. In the eastern sector, in the framework of a memorandum of understanding reportedly signed between the Bashar al-Assad regime and the Kurdish People's Protection Units (YPG), open sources reported Assad forces have entered Hasakah, Qamishi and Derik town centers, hoisted Syrian flags and set up checkpoints, Also, as reported by the media, some YPG groups have changed uniforms and are wearing uniforms of Assad forces. In the western sector, there are occasional exchanges of artillery-rocket fire between the Turkish army and the YPG that have been causing civilian casualties; however, the fire has not been as heavy as at the beginning of the incursion.

The important developments were on the western sector of the Manbij-Kobani line Oct. 13. Manbij is particularly critical because it connects the Turkish-backed Free Syrian Army-controlled Jarablus-al Rai-al Bab triangle and Afrin to the east of Euphrates, making it a priority target for Ankara. A quick decision by Trump to withdraw US troops from Manbij appears to have been coordinated with the Russians, whose flag is flying over the Manbij city center and the critical front lines. Currently Russian special forces and military police are patrolling along the front line, with Russia taking over control of bases the United States has abandoned. We know that the United States has left Manbij airspace and Turkish F-16s shelled the area to slow down the advance of Assad forces and to give time to FSA units that are trying to move from al-Bab to the northeast. That was the only Turkish airstrike, giving the impression that Russia has also taken over control of the Manbij airspace and closed it to others.

Meanwhile, it is perceptible that the center of gravity has shifted to diplomatic fronts, with overloaded diplomatic traffic on the Ankara-Washington-Moscow-Damascus line. We will see whether Ankara succeeds in taking over 80% of the region as it wanted through diplomatic negotiations.

It appears, however, that Ankara had not carefully prepared for optic/propaganda fronts as much as it paid attention to the military front.

On the diplomatic front, it appears that Ankara could not properly calculate potential outcomes before the operation and prepare contingency diplomatic plans accordingly: Despite getting a green light from Trump on Oct. 7, Ankara couldn’t predict that Trump could reverse course in such a short time and so drastically, that Assad and the YPG could come to terms so quickly and comprehensively and that the United States had agreed with Russia for the handover of Manbij from US forces to Russian forces. Russia is adopting an ambivalent stance instead of openly supporting Turkey in its incursion and in the final analysis Moscow is exhibiting a pro-Assad regime position.

US Vice President Mike Pence and Secretary of State Mike Pompeo are on their way to Ankara. It is highly likely that the meeting they will have with Erdogan will be most solemn and tense. It is clear that Pence is coming to Ankara not to listen but with a plan for Turkey to stop the operation, with personal messages from Trump. But Erdogan remains resolute about continuing with the incursion — or at least that is what he is telling his domestic audience. Erdogan in a speech at the parliament Oct. 16 said countries such as the United States and Saudi Arabia, which accuse Turkey of killing civilians, should first look at the massacres conducted by their operations in Syria, Iraq, Yemen and Afghanistan.

“Whenever we take over control of a depth of 30 to 35 kilometers between Manbij and the Iraqi border, that is when our operation will end. Until we achieve that target no power can stop us. I want to start work immediately of return of 1 to 2 million Syrians to areas we have taken over. What we ask international organizations is to allot their resources to this project,” Erdogan said.

He concluded, “I am not going to meet them [Pence and Pompeo]. They will be talking with their counterparts. When Trump comes here, I’ll be talking.”

But these remarks were rectified by presidential spokesman Fahrettin Altun, who said an Erdogan-Pompeo-Pence meeting will take place Oct. 17.

Moscow still has been keeping relatively quiet about the operation. The Russians said they had invited Erdogan to Moscow to discuss the developments but no date was given.

What is obvious is that Ankara’s Operation Peace Spring terminated the territorial claims of the YPG in northeast Syria and severed YPG-US links and by expediting the hasty departure of the United States from the zone, it has created a wide-open space for Moscow to fill.

Ankara’s operation improved the ties between the PYD/YPG on the one hand and the Assad regime on the other and promoted the possible realization of the scenario of Moscow’s long dream of "US out, YPG down and sitting next to the Assad regime as younger brother under Russian patronage.”

Finally, Ankara’s operation compelled Turkey to enter into dialogue with the Assad regime. Paradoxically, Ankara achieved its goals of disrupting the territorial claim of the YPG and eradicating military ties between the United States and the YPG but at the cost of becoming more dependent on Moscow and Assad regime.

How will the Turkey-YPG struggle develop from this point on? Prerequisite reading for this is the 1998 Adana Protocol.

This is the framework document that sets out the principles of the agreement between Ankara and Damascus to regulate the PKK’s existence in Syria. But there is a caveat:

In 1998 Ankara’s hand was strong and Damascus’ was weak. Now Damascus’ hand is strong and there is a giant like Russia behind it. A revision of this protocol should not come as a surprise.

To end this article, a prophecy: One effect of Operation Peace Spring is to accelerate diplomatic processes over Syria. Diplomatic developments of the last 10 days exceeded those of the past two years.

Now, in the final analysis, will Moscow prefer Damascus or Ankara when its interests are affected? As long as there are Syrian Kurds and Sunni opposition in northern Syria, these interests will regularly be tested.