Even his greatest detractors in Turkey are complimenting Erdogan over winning US and Russian support against the Syrian Kurds. 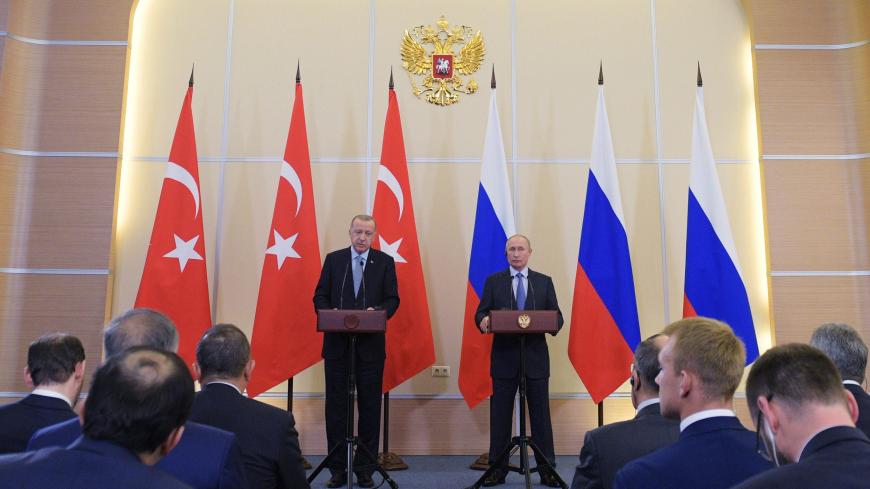 Erdogan has in effect secured Moscow’s acceptance of Turkey’s Operation Peace Spring against the YPG, launched Oct. 9. Ankara considers the YPG a Kurdish terrorist organization that threatens its security.

Only days before the Erdogan-Putin talks in the Black Sea resort town of Sochi, Russian officials were openly speaking out against Ankara’s military incursion. Moscow’s Syria envoy Alexander Lavrentiev, for example, declared Turkey’s offensive “unacceptable” and said, “Turkey has no right to permanently deploy its troops in Syria.”

The Sochi Memorandum issued after the Erdogan-Putin talks belies that position. Article 3 says the “status quo” in the zone 120 kilometers (75 miles) long and 30 kilometers (18 miles) deep between the village of Tell Abyad in the west and the city of Ras al-Ain in the east — which was captured by Turkey last week — will be maintained.

This means in effect that the Turkish military presence in the region will remain.

Article 6 of the memorandum, on the other hand, states that the YPG will be evacuated within 150 hours from regions currently held by the regime with Russian support, including the cities of Manbij and Tel Rifaat.

After Turkey launched its operation, Moscow brokered a deal between the YPG and Damascus for regime forces to enter Manbij following the departure of US forces from the city. The move encouraged the Kurds to believe that Russia would stop the Turkish advance.

Instead, Moscow promised in Sochi that the YPG would be removed from Manbij and also from Tel Rifaat further south, where regime and Russian forces have maintained a presence for some time alongside the YPG.

Put another way, Turkey will not have control over the “safe zone” 444 kilometers (276 miles) long and 32 kilometers (20 miles) deep Erdogan has been pushing for east of the Euphrates River. With US and Russian assistance, however, it will have gotten the YPG to evacuate all the lands it held near the Turkish border.

Turkey will also have control over the 120-kilometer (70-mile) zone between Tell Abyad and Ras al-Ain, where it hopes to settle a large portion of the 3.6 million Syrian refugees it has been hosting for years. Under the Sochi Memorandum Turkey and Russia will also conduct joint patrols in regions that fall outside of Turkey’s “safe zone” in order to monitor YPG activities.

While all of these developments are wins for Ankara, its greatest strategic gain is that Erdogan has prevented Kurdish aspirations for self-rule in a part of Syria that is greater than Lebanon and is rich in natural resources.

Until recently the YPG appeared well placed to consolidate its hold over these lands with US support, despite what many took to be hollow threats by Erdogan to send in the Turkish army and prevent it. This situation has fundamentally changed.

Following the Sochi talks, Turkey’s Foreign Minister Mevlut Cavusoglu boasted about Erdogan’s leadership prowess and hit back at those who have been arguing for weeks that Ankara was caught between Washington and Moscow, unable to move.

Pointing out that both the United States and Russia have officially acknowledged that Turkey’s security concerns are legitimate, Cavusoglu argued that these countries also accept Ankara’s Operation Peace Spring as legitimate. Trump and Putin's green light for Ankara in northeastern Syria would clearly undermine any statements from Moscow and Washington that dispute Cavusoglu’s claim.

Even Erdogan’s harshest detractors in Turkey acknowledge his success in juggling the United States and Russia to secure his aims in Syria. Columnist Mehmet Yilmaz, who has been one of Erdogan’s most vocal critics, argued in the independent T24 news portal, “The point arrived at has to be considered a success for Erdogan, even if comes at the expense of bringing Turkey’s ties with Europe to a breaking point.”

He was referring to the outcry in Europe against Turkey’s operation launched on Oct. 9. “At this stage I can say that … Erdogan has returned from Sochi having gotten what he wants,” Yilmaz concluded.

Many analysts note that Erdogan’s hardball tactics have also put a new set of dynamics into play in Syria that some believe will expedite the end of this bloody conflict.

It may be wishful thinking, but what is certain is that Erdogan has put his stamp on the Syrian crisis after defying odds that appeared until recently to be stacked against Turkey’s interests. By remaining locked on his goals and totally disregarding the international outcry — including from the Arab world and Iran — he has secured what he has been promising the Turkish public for months.

Fikret Bila, another columnist who writes for T24, argued that the agreement arrived at in Sochi, like the deal secured with US Vice President Mike Pence in Ankara last week, are the direct products of Peace Spring. Bila wrote that Turkey’s operation “has altered military and political balances,” adding that this outcome has strengthened Ankara’s hand in the lead-up to next week’s talks in Geneva on a new constitution for Syria.

Under the cease-fire agreement worked out with Pence, the YPG was given 120 hours to move 30 kilometers (18 miles) away from the Turkish border. That deadline coincided with the Erdogan-Putin talks in Sochi.

Erdogan had warned that if the YPG violates the agreement, Turkey will resume its military operation. There is no indication that Turkey will do so, however, especially since the YPG is said to have mostly complied with the accord.

The general belief is that the YPG will concentrate on working with Russia and Damascus, having lost all hope in American support, to secure some political rights for the future. A draft constitution for Syria that Russia produced in January 2017 acknowledges a need to recognize Kurdish cultural autonomy. Ankara will clearly oppose it, but for the time being appears happy with what it has already gained.

Nevertheless, that the Sochi Memorandum also underlines the sides’ commitment to prevent “separatist agendas in Syria” is heartening for Ankara.

Political commentator Muharrem Sarikaya believes that the issue will not go away.

“No one should assume that Russia will give up on using the Kurdish card,” Sarikaya wrote in his Haberturk column, recalling that Moscow has maintained a relationship with the YPG for years and is currently mediating between Damascus and the group.

Sarikaya argued that Russia was aiming to give the Syrian Kurds cantonal privileges under a new constitution. Putin appeared to confirm this idea during the joint presser in Sochi after his talks with Erdogan, saying, “Dialogue should begin between the Syrian government and the Kurds in the region. The rights of the Kurds, who are part of the multiethnic Syrian people, can only be secured in this way.”

Putin also said peace and stability in the region will be secured if Turkey and Syria work together, suggesting Erdogan will need to switch gears if he wants his arrangements with Moscow to hold.

Article 4 of the Sochi Memorandum underlines the importance the sides attach to the Adana Agreement signed between Ankara and Damascus in 1998. It foresaw cooperation against the outlawed Kurdistan Workers Party, to which the YPG has organic links. If this agreement is revived, it would represent a major step toward normalized ties between Erdogan’s government and the regime of President Bashar al-Assad, despite their deep hatred for each other.

Erdogan has signaled his willingness to see the Adana Agreement revived. Having gotten what he wants out of Moscow, many believe it will not be long before he endorses high-level talks with the Assad regime.