The Defense Department wants $1.8 billion for precision-guided munitions to finish wiping out the Islamic State. 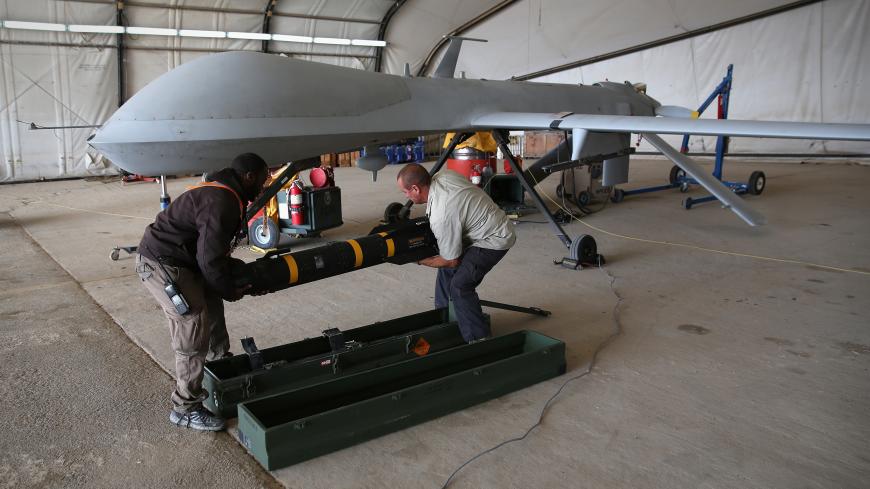 Contract workers load a Hellfire missile onto a US Air Force MQ-1B Predator unmanned aerial vehicle at a secret air base in the Persian Gulf, Jan. 7, 2016. - John Moore/Getty Images

The Donald Trump administration is seeking nearly $2 billion in precision-guided weapons for the Iraq and Syria battlefields, as the US-led coalition fighting the Islamic State (IS) faces increased threats from forces loyal to Bashar al-Assad. That’s 20% more than the Pentagon spent on munitions in all Middle East war zones in 2017.

A spokeswoman for the Joint Chiefs of Staff told Al-Monitor that the Pentagon has requested $1.8 billion to replace expended munitions — including precision-guided bomb kits, small diameter bombs and Hellfire missiles — used in 2017 to help liberate Mosul and Raqqa. The spending boost for munitions is driving the US budget for the anti-IS mission to $15.3 billion for fiscal year 2019, a 15% jump over the $13 billion requested for the current year.

US Marine Corps Maj. Lisa Lawrence said the boost will be offset by reductions in operations and maintenance as well as military construction in the Pentagon’s $716 billion budget request for the fiscal year that starts Oct. 1. She did not elaborate on what projects could be cut.

“The DoD [Department of Defense] has expended more munitions than planned over the last few years, primarily to defeat Islamic State of Iraq and Syria [ISIS], leading to higher demand to replenish munition inventories,” states the overview for the Defense Department’s budget, which was released Monday. “That includes Hellfire missiles, bomb upgrades and small-diameter bombs that the Pentagon says were used extensively to liberate Mosul last year.”

The weapons surge may prove helpful in Syria’s Euphrates River Valley, experts say, where pro-Assad troops and Russian contractors are threatening to dislodge the US-backed Syrian Democratic Forces near their Deir ez-Zor headquarters. The area east of the river is generally considered a no-go zone for pro-regime forces under a de-confliction agreement struck by the United States and Russia that has been facing military pressure in recent weeks.

In a three-hour battle last week, US forces left as many as 100 pro-regime troops dead in what Pentagon officials characterized as a defensive stand against advancing foes. The United States called in airstrikes to ward off what it called a “battalion-sized” force including Russian-made T-72 tanks.

“When you’re talking about taking out groups in contact situations when the bad guys are within 200 meters, in order to deploy that, you have to get down and get dirty,” said John Venable, a retired US Air Force colonel who’s now a senior fellow at the conservative Heritage Foundation. “All of those [weapons] allow you to strike small targets with high precision, to minimize collateral damage and kill the thing you’re after.”

The $31.1 million request for Javelin anti-tank missile systems in the fiscal year 2019 budget will “come in very handy,” Venable added, as they can notably be used against Syrian army tanks. A US MQ-9 Reaper drone destroyed a pro-regime tank over the weekend, Lt. Gen. Jeffrey Harrigian, head of US Air Forces Central Command, told reporters on Wednesday. The United States is also asking for more air-to-ground missiles that are good for destroying entrenched targets from the air.

The Pentagon says more precise weapons could help limit civilian casualties, but the main justification for their expanded use is to protect aircrews by allowing them to fly high above targets. Limiting the possibility of US pilots getting shot down and taken prisoner by IS has been a high priority for the Pentagon since the torture and death of a Jordanian fighter pilot whose F-16 was shot down near Raqqa in 2015.

“Precision gave us options that we never had before in history,” US Defense Secretary James Mattis told reporters in Iraq following the liberation of Mosul, the country’s second-largest city, last August.

Rights groups and journalists on the ground have disputed the Pentagon’s casualty figures as unrealistically rosy. The New York Times late last year found that one in every five US strikes in Iraq caused civilian casualties. In January, the US-led coalition said that 831 civilians had been killed in anti-IS airstrikes since the start of the campaign in 2014.

Yet after three years of war in Iraq and Syria, it’s not clear that President Trump’s budget bump for the US-led mission of 73 nations will lead to a deepened air campaign in the region. Some of the weapons included in the new budget could be used elsewhere, Venable said, such as Afghanistan.

Even as the anti-IS mission began to wind down at the end of 2017, the United States set a new high of nearly 40,000 munitions dropped in 2017, according to the Air Force component of US Central Command, despite flying fewer bombing sorties than the previous year.

Air Force Secretary Heather Wilson said in September that the United States fired 100 precision weapons a day against IS. She has said that Iraqi forces have called in strikes using the small diameter bomb to take out enemies as close as 13 meters (43 feet) from the front lines. Military officials have cited a shortage in small diameter bombs as a cause for concern.

The increase in precision-guided weapons capability in Iraq and Syria comes as other parts of the anti-IS mission are getting cut. Funding to train and equip Iraqi and Syrian forces, for example, is expected to get cut by $369 million — more than 17% — while the Defense Department sets aside $410 million to replace worn-out equipment on the battlefield.