Congress prioritizes smart bombs for Israel despite US shortages

US lawmakers are scrambling to defend Israel from rising regional threats. 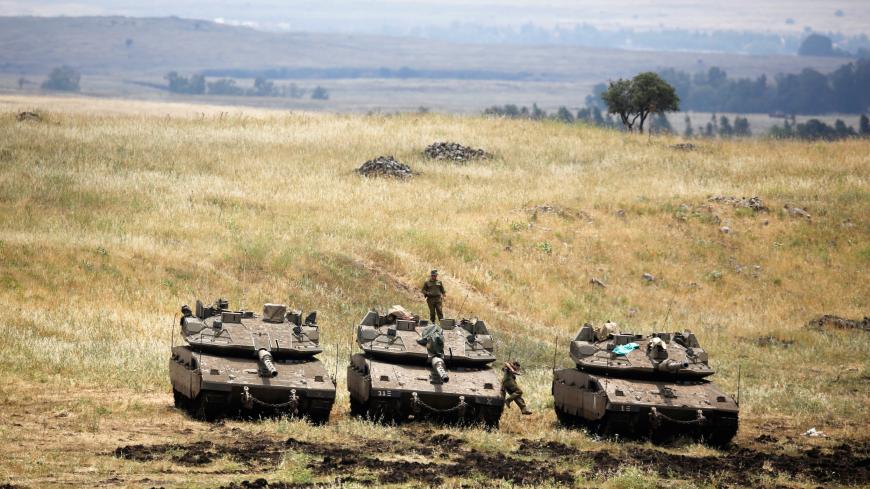 An Israeli soldier stands on a tank as another jumps off it near the Israeli side of the border with Syria in the Israeli-occupied Golan Heights, May 9, 2018. - REUTERS/Amir Cohen

Congress today advanced legislation that prioritizes the delivery of precision-guided munitions for Israel amid rising threats from its adversaries across the region.

There’s just one problem: The United States’ own stockpile is already insufficient.

That did not deter the House Foreign Affairs Committee from unanimously endorsing the US-Israel Security Assistance Authorization Act of 2018, introduced by Reps. Ileana Ros-Lehtinen, R-Fla., and Ted Deutch, D-Fla., for a vote on the House floor.

“With Iran creeping ever closer to Israel’s borders and threatening to attack Israel from the north, our friends need support now more than ever,” Ros-Lehtinen said ahead of the vote.

A House staffer told Al-Monitor that the United States currently does not have enough precision-guided munitions stockpiled for itself in the case of an emergency. Still, the source said, the bill serves as “a message to Israel that if Iran strikes you, we will help you strike them back.”

Tensions between Israel and Iran have escalated sharply in recent weeks, with the Israeli military bombing suspected Iranian and Hezbollah weapons facilities in Syria. On Tuesday, suspected Israeli strikes killed nine fighters loyal to the Bashar al-Assad regime at a military facility in Damascus mere hours after US President Donald Trump withdrew from the Iran nuclear deal.

“Iran in particular has taken its aggression against Israel to new heights if you’re looking at the missiles that have been placed in Syria and on the border,” committee Chairman Ed Royce, R-Calif., said before the vote. “This bipartisan bill deepens and updates our security partnership with Israel to ensure that Israel can defend itself by itself in the face of these evolving threats.”

The bill authorizes the Trump administration to “transfer precision guided munitions and related defense articles and services to reserve stocks for Israel.” It requires the president to certify that such transfers don’t affect the US ability “to maintain a sufficient supply” of precision-guided munitions, combat readiness or US national security interests, but also provides an exemption “in the case of an emergency” — without defining what that means.

The United States first established a war reserve stock in Israel in 1989. Israel drew from the emergency stockpile to replenish its weapons during the 2006 war against Lebanon’s Hezbollah and again during its offensive against Hamas in the Gaza Strip in 2014.

Analysts say adding precision-guided munitions to the stockpile would give Israel a greater edge against its adversaries.

“One PGM [precision-guided munition] is worth at least 10 iron bombs with regard to point targets on the line,” said John Venable, a senior research fellow at the conservative Hudson Institute and a US Air Force veteran.

The United States has burned through a significant quantity of its precision-guided munition reserves fighting the Islamic State (IS) in Syria and Iraq as well as the Taliban in Afghanistan. Al-Monitor first reported earlier this year that the Pentagon requested $1.8 billion for fiscal year 2019 to replace its stockpile.

Venable noted that while the United States was dropping roughly 5,000 precision-guided munitions per month at certain periods last year, that number has decreased as IS lost ground in Syria and Iraq.

“We’re starting to build up a stockpile,” Venable told Al-Monitor. “We’re really starting to pick up the pace with regard to the budget.”

He added, “Between Boeing and Lockheed and the other vendors who produce these systems, we can always ask them to open another production line and they can do that relatively rapidly if there is a crisis. But right now we’re meeting our needs and we’re doing pretty well with replenishing.”

However, while moving to provide reserve stocks of precision-guided munitions for Israel for the first time, the Foreign Affairs Committee also deleted a significant provision ahead of today’s vote that would have required the Trump administration to provide Israel with expedited procedures to obtain the munitions. The provision remains in the Senate version of the bill introduced by Sen. Marco Rubio, R-Fla.

“This would commit the US to providing rapid response materials to Israel as more or less our own rapid response,” Lara Friedman, the president of the Foundation for Middle East Peace, which opposes the bill, told Al-Monitor. “If Israel has a direct missile threat from Iran, we treat that more or less the same way we treat it as a direct threat to us. This is an extraordinary step, and it’s sort of quoted here as if it’s a small thing.”

In another departure, the House bill extends the authorization on Israeli military assistance for five years, instead of the 10 called for in the Senate; the 2016 US-Israel memorandum of understanding is for 10 years. House staffers said the shorter time frame gives Congress to chance to re-evaluate its provisions should Israel’s security situation change.

The legislation was a key request of the pro-Israel lobby AIPAC at its annual conference and lobbying day earlier this year. AIPAC lobbyists were on Capitol Hill again earlier this week pushing the Senate to act on its version of the bill. The Senate bill gained eight new co-sponsors this week, bringing the total number of supporters to 35.