US seeks to double AK-47 supply to Syrian partners 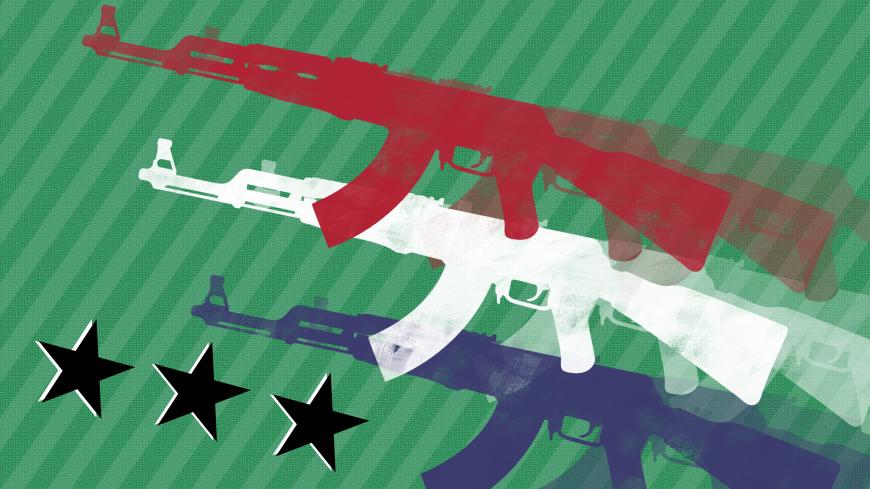 The Donald Trump administration is seeking to more than double the number of assault rifles it provides to Syrian Kurds and other US-backed fighters despite rising anger from NATO ally Turkey.

Budget figures released Feb. 15 reveal that the Pentagon plans to give its Syrian partners — including the Syrian Democratic Forces (SDF) — more than 25,000 AK-47s, the gas-powered Soviet-era gun that has become a fixture in Syria’s seven-year civil war. The low cost and accessibility of the Kalashnikovs make them easy for US-backed troops to sustain as the Pentagon looks to hold territory won back from the Islamic State (IS) in the Euphrates River Valley.

The request more than doubles the 12,000 assault rifles the Department of Defense requested for Syrian forces in the current fiscal year, even as the US plans to dole out fewer machine guns, mortars and sniper rifles. Many of the US-supplied weapons used in Syria, including AK-47s, are sourced from Eastern European countries such as Bulgaria, Bosnia and the Czech Republic.

The US relationship with its Syrian partners is “reliant upon DoD’s [Department of Defense’s] ability to provide weapons, ammunition and other equipment required for planned objectives,” the Pentagon wrote in documents justifying its $300 million counter-IS budget for Syria. “DoD equips vetted partner forces to secure and hold territory liberated from [IS], which mitigates risk of [IS] regaining territory.”

The Defense Department hopes to have 65,000 vetted Syrian troops, including SDF-led units and predominantly Arab internal security forces such as the Manbij Military Council and Raqqa Internal Security Force, trained and ready to go by the end of this fiscal year, in late September. The Pentagon also plans to provide stipends for 10,000 Syrian opposition fighters, slightly up from 6,000 last year.

The latest budget request, however, makes no mention of a “border force.” Rumors that the United States was training 30,000 veterans of the Kurdish People’s Protection Units (YPG) and Arab SDF recruits for such a purpose helped justify a military incursion into northwestern Syria by Turkey, which considers the YPG to be terrorists.

But the guns could be spread out to support a wide range of US-backed groups on the ground, including the Raqqa Internal Security Forces and the Deir ez-Zor military council, as the Pentagon tries to add more Arab fighters to the anti-IS mission. Vetted Syrian fighters in the southwest of the country, near where the United States, Russia and Jordan agreed to forge safe zones, could also receive assistance from the new stockpile.

“The fact of the matter is that the pool of the Kurdish fighters has been tapped,” said Nick Heras, a fellow at the Center for a New American Security. “What Turkey is more worried about is [anti-tank missiles], not AK-47s, and higher order weaponry going to the [Turkish Kurds].”

The guns come as the Pentagon faces “a lot of pressure to make the SDF a self-running machine” and get more guns into the hands of 12,500 vetted Syrian fighters the US-led mission has trained since 2016, Heras told Al-Monitor.

Yet the proposed AK-47 increase clashes with State Department efforts to play down US support for Kurdish forces. Following a meeting with Turkish President Recep Tayyip Erdogan and Foreign Minister Mevlut Cavusoglu in Ankara, Secretary of State Rex Tillerson pledged to coordinate more closely with the Turks in Syria.

Turkey this week formally asked the United States to boot the YPG from the US-led anti-IS coalition. A new working group to tackle US-Turkish differences is supposed to hold its first meeting by mid-March. Turkey has proposed joint deployment with US forces in former IS-held areas where the United States is leaning on Kurdish support to prevent the re-emergence of the militant group.

Despite the bump in assault rifles, military supplies to the SDF and other US-backed rebel groups in Syria are becoming tighter as IS disintegrates, with fewer than 2,000 IS fighters left in pockets of the Middle Euphrates River Valley. In November, Pentagon officials told Al-Monitor that they plan to take back large vehicles and heavy or crew-served weapons from the Kurdish group after the defeat of IS.

The budget for fiscal year 2019 calls for nearly $48 million in weapons for Syrian fighters, less than half the request for the current fiscal year, which ends Sept. 30. The new budget also calls for giving rebel groups just a quarter of Russian-made PKM machine guns requested for fiscal year 2018, while slashing the number of anti-tank grenade launchers by nearly 90%.

The United States is also set to give the Syrians just 60 120 mm tube-launched mortars, which could challenge forces such as the SDF that have come under attack by pro-regime forces in recent days. 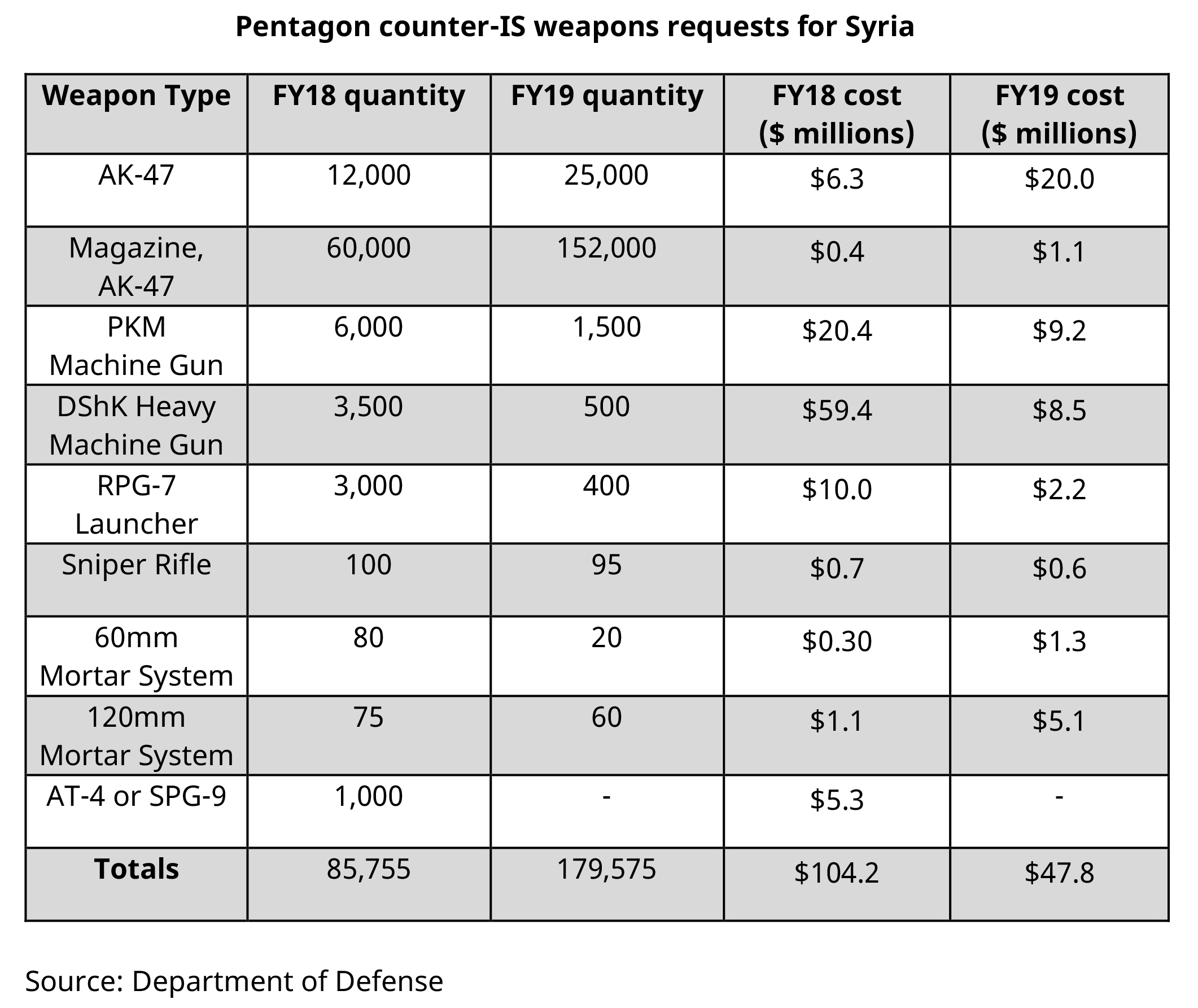 “One big attack by [Syrian President Bashar al-] Assad and that’s gone,” Michael Knights, a researcher at the Washington Institute for Near East Policy who reviewed the documents, told Al-Monitor.

In addition, the Pentagon is also calling for fewer supply lifts into Syria to back up the 2,000 US troops in the country. Many are in towns and cities liberated from IS, such as the Euphrates River Valley outposts of Deir ez-Zor and Raqqa, as well as Manbij in the north.

The United States is budgeting 40 C-17 sorties into the Middle East to bring supplies to Turkey, Jordan and Kuwait, down from 50 such flights requested in this year’s budget. From there, they will be moved by ground and air dropped into Syria.

The proposed cuts come as the campaign faces increasing congressional scrutiny and pressure on the Trump administration to justify staying involved in the Syria conflict. In an interview with Al-Monitor last month, Senate Foreign Relations Committee member Chris Coons, D-Del., called plans to leave 2,000 US troops in the country indefinitely “an open-ended and unstructured commitment to Syria rather than a clear strategy.”