Turkey continues to be concerned about the relationship between the United States and the Syrian Kurds. 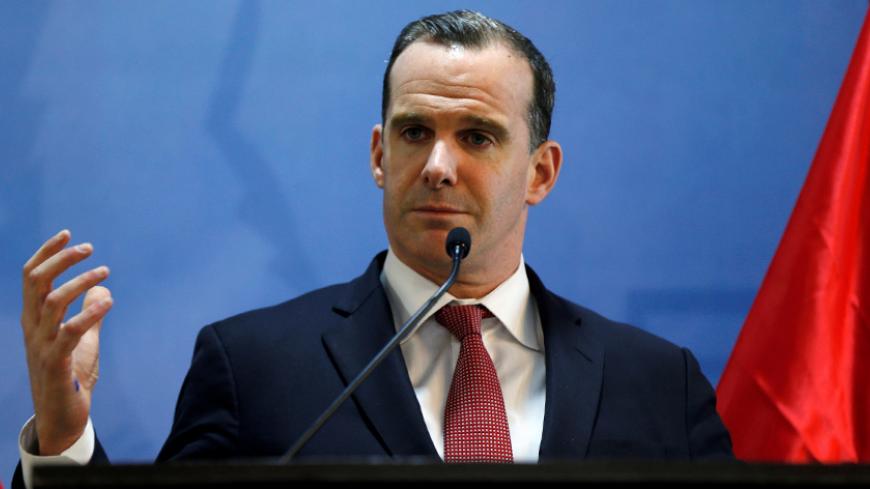 Brett McGurk, the US envoy to the coalition against the Islamic State, speaks during a news conference at the US Embassy in Amman, Jordan, Nov. 6, 2016. - REUTERS/Muhammad Hamed

Turkish fury over the United States’ ongoing partnership with the Syrian Kurds showed no signs of abating as Ankara made a formal complaint against the top US official it views as one of the main architects of the alliance. The Turkish Foreign Ministry announced over the weekend that it had protested remarks by Brett McGurk, the US special envoy for the global coalition against the Islamic State (IS), calling them “provocative.”

The Foreign Ministry was referring to McGurk’s apparent allusions to Turkey’s role in the emergence of the growing threat of the al-Qaeda-linked militant army Hayat Tahrir al-Sham (HTS, formerly Jabhat al-Nusra and recently rebranded), which is expanding its grip over Syria’s Idlib province, on the Turkish border. Speaking at a panel at the Middle East Institute (MEI) in Washington July 27, McGurk said, “The approach by some of our partners to send tens of thousands of tons of weapons and looking the other way as these foreign fighters came into Syria may not have been the best approach. And al-Qaeda has taken full advantage of it.”

It is generally believed McGurk was referring to Turkey, which has long been accused of turning a blind eye, at the very least, if not arming and training jihadi fighters, including IS and Jabhat al-Nusra, in their campaign to topple Syrian President Bashar al-Assad and to attack the US-allied Syrian Kurdish People’s Protection Units (YPG).

Stating the obvious, McGurk said, “Idlib now is a huge problem. It is an al-Qaeda safe haven right on the border of Turkey. That is obviously something that we will be in very close discussion with the Turks on.” US officials believe that Idlib could become the new center for planning terror attacks against the West and that sealing the border between Turkey and Idlib may help mitigate this risk.

From the start of the Syrian conflict, Turkey was the main conduit for weapons and fighters flowing into Syria. In May 2013, US President Barack Obama warned then-Turkish Prime Minister Recep Tayyip Erdogan during talks in Washington about the risks posed by Jabhat al-Nusra when relations between the two countries were at an all-time peak.

Turkey clearly took umbrage at McGurk’s oblique reminder of the alarm bells that were sounded early on. According to Foreign Ministry spokesman Huseyin Muftuoglu, McGurk was reminded in turn of the United States' support for the “terrorist YPG” and that this needs to end.

Just two months ago, another top State Department official, Jonathan Cohen, told another MEI panel, that the United States’ relationship with the YPG was “temporary, transactional and tactical.” Cohen explained, “We have the YPG because they were the only force on the ground ready to act in the short term. That is where it stops.”

Turkey wants it to stop at Raqqa, the so-called capital of IS. The YPG-led Syrian Democratic Forces (SDF) said it has liberated nearly half of the predominantly Arab city since launching operations June 6. Once the campaign is completed, Turkey wants the US-YPG alliance scotched and hopes that McGurk will move on. The latter is highly unlikely unless McGurk decides to leave of his own accord. Senior administration officials routinely praise McGurk in private conversations. As one said, “Who else could do that job? There is nobody to replace him.”

As the top echelons of the administration weigh their next move, there is growing acknowledgement of the indisputably close links between the YPG and the Kurdistan Workers Party, which is waging an armed campaign inside Turkey for Kurdish self-rule.

US Secretary of Defense James Mattis is expected to address Turkish concerns when he visits in the coming weeks as part of a regional tour. There is speculation that Turkey's repeated threats to acquire Russia's S-400 missile system, dismissed until recently as as pressure tactic, may finally be having an effect.

Still, sources familiar with the administration’s plans insist that the decision has been made, and the anti-IS campaign will continue with the SDF moving into the middle Euphrates Valley where IS militants are entrenched, and all the way to Abu Kamal, on the Syrian-Iraqi border. Regime and Iranian-backed forces advancing in the same direction will not be permitted to get there first.

Abu Kamal is critical, according to Nicholas A. Heras, a fellow at the Center for a New American Security. “Control over Abu Kamal means controlling the Syrian-Iraqi border and having leverage over the future of both Syria and Iraq’s national security,” he explained to Al-Monitor. “Neither Damascus nor Tehran wants US-backed forces to capture Abu Kamal and give the United States that leverage.” The US-led coalition is loath to give Tehran the same.

The coalition is reportedly reviewing several options to get to Abu Kamal. Heras outlined them. Route 1 is the Khabur route. That would be to follow the Khabur River from southern Hasakah province into Deir ez-Zor province. Where the Khabur meets the Euphrates, at al-Busayrah in Deir ez-Zor province, the coalition forces would turn south, along the east bank of the Euphrates, toward Mayadin. From Mayadin, the forces would move on to Abu Kamal on the Syrian-Iraqi border. This route would allow the coalition to avoid Assad forces in and around the city of Deir ez-Zor.

Route 3 is the Syrian desert route. This would involve staging an offensive from al-Tanf, near the Jordanian-Syrian border in the desert, all the way to the lower Euphrates River around Abu Kamal. This route is difficult because Assad forces and their allies in the Syrian Desert region are positioned in between the coalition at al-Tanf and Abu Kamal. This route is also more challenging logistically because the SDF, which would be following route 1 or route 2, is far larger than any rebel force the coalition has assembled at al-Tanf.

Turkey is every bit as worried as the United States about growing Iranian influence in the region and the likely risks of Iranian proxies controlling the Syrian-Iraqi border. Thus, in principle, Ankara would prefer that the United States control Abu Kamal, but not in coordination with the SDF. It has failed, however, to come up with an alternative to the SDF to do the job. “That’s always been our problem,” a Turkish official told Al-Monitor.