What’s behind Damascus’ claim of 'invasion from Jordan'?

The Russian media has been closely following Damascus’ claims on military movement on the Jordanian-Syrian border, looking at the goals behind certain claims and how they may impact a political settlement. 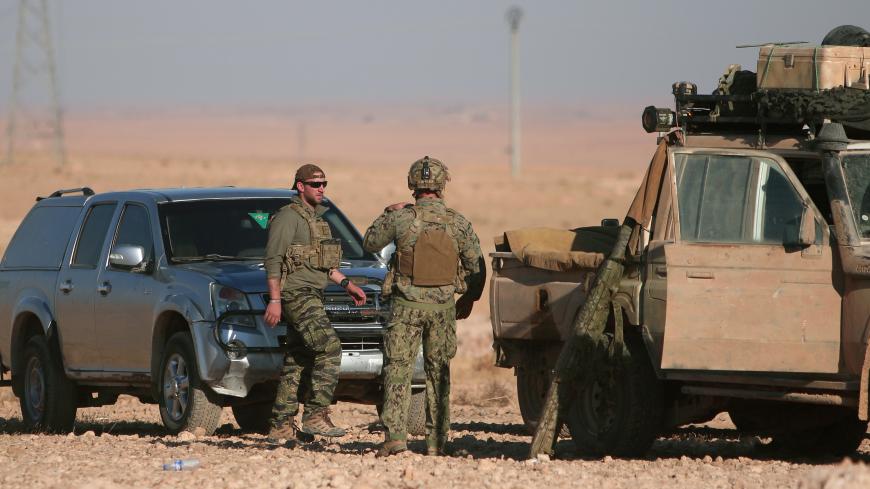 In recent months, the area of the so-called Syrian-Jordanian-Iraqi triangle has seen fighting, negotiations, armistice, the breakup of old coalitions and the propping up of new ones. Over the past few weeks, the Russian media have given this area much attention, mainly due to repeated statements by Syrian authorities that an invasion of the southern regions of Syria in Daraa province is being prepared from Jordanian territory as part of a US-devised plan and that Damascus will regard this as an act of aggression.

In Russia, some hard-line observers have been interpreting this development primarily through the lens of seeing Western conspiracies and the need for a more robust support of President Bashar al-Assad. One trigger was the seventh annual Eager Lion military exercises, which took place May 7-18 in Jordan with the support of the US Army and involved 20 countries. A second trigger was a Lebanese newspaper report about the scale of a future “occupation” under which the “aggressors” would allegedly move to the Syrian city of al-Bukamal (near Qaim, Iraq) as well as occupy Daraa and Quneitra to include them in the Jordanian zone of influence and, if lucky, Suwayda, with Druze enclaves. The scale of this alleged occupation plan would exceed that of the Turkey-led Operation Euphrates Shield. Amman eventually denied the rumors of any invasion; some in Moscow even interpreted this as a sign of “Jordanian firmness” in the face of American pressure.

Damascus' statements seem to have a strong propaganda element. Syria's overall purpose seems to be to neutralize opposition successes in the fight against the Islamic State (IS) in eastern Qalamoun and to launch an offensive in the west in Deir ez-Zor (on the Euphrates between al-Bukamal and Raqqa) using army forces, the National Defense Forces (NDF) and Shiite militia to split the rebels in both eastern Qalamoun and around the Jordanian border. The regime hopes to advance to al-Tanf area, where US-allied forces have been training Syrian militias. Al-Tanf is on the Iraqi border, not far from Jordan.

The fact is that for all intents and purposes, an invasion of the British, Americans and Jordanians into Syria (both to the north and to the south) took place a long time ago. At al-Tanf, coalition instructors and units of the special operations forces are acting together with the opposition and formed a buffer zone about 10-15 kilometers (6-9 miles) deep into Syrian territory, near the border with Jordan where American and British special forces are operating. In the summer of 2016, US helicopters even carried out landing tactical assault in the area of al-Bukamal in the rear of the IS militants, but the operation ended unsuccessfully. Reports on why this happened are contradictory. However, it appears that Islamists using a system of tunnels on the Syrian-Iraqi border struck at the rear of the New Syrian Army (NSA), while allied fighters from the Forces of Martyr Ahmad al-Abdo, as well as local tribes, did not support the “liberators” — US-supported groups. All this led to the disbanding of the NSA; its remnants then entered the alliance called Revolution Commando, composed of the Forces of Martyr Ahmad al-Abdo, Jaish Usud al-Sharqiya and the so-called free clans army operating in the Syrian desert under the leadership of Mohannad Ahmed al-Tallaa.

Al-Bukamal is an important border gateway city, and controlling it is a goal for both the United States and groups such as Jaish Usud al-Sharqiya. The US interest is to first take control of al-Bukamal and establish a military facility there for future border control — an idea long discussed by some American experts. The prime driver for Jaish Usud al-Sharqiya is the desire to win back home territories, since several hundred fighters in this faction are coming from Deir ez-Zor. They receive a monthly payment of $150 for fighting IS from the center from the so-called Military Operations Command in Jordan.

From a military perspective, it is not clear why the United States and allied forces would want to seize the entire “southern triangle” along with the Druze enclaves; this would include actions from the Southern Front, which operates in Daraa and Suwayda and is not part of Revolution Commando.

Nevertheless, there is a confrontation between Revolution Commando and regime forces. In response to the airstrikes, Jaish Usud al-Sharqiya shelled the positions of pro-government forces using artillery. On May 10, Jordanians shot down Syrian drones. On May 13, a mobile Soviet-era manufactured Strela-10 SAM was seen in the ranks of the Syrian grouping — this anti-aircraft missile system apparently is to serve as a psychological deterrent and as something to have just in case. Tallaa said the positions of pro-government forces and the opposition in al-Tanfa area are 43 miles apart. “We saw their flags, and if they attack us, we will answer,” the commander of the opposition coalition said.

Thus, Damascus used the idea of the invasion of the forces of the Western coalition in Jordan and presented drone-taken pictures in which regime armored vehicles were shown 43 miles from the Syrian border in a move separating the opposition in eastern Qalamoun and al-Tanf region and advancing toward Deir ez-Zor along the Damascus-Baghdad highway. Pro-government media promote this action by saying that the Syrians need to develop trade relations with Iraq. However, it is difficult to imagine that any trade relations are possible in the medium term when IS militants constantly organize attacks all over Iraq, including Anbar province, on the other side of the border from al-Tanf. There also is a rebel grouping in al-Tanf area that operates in conjunction with the US and British special forces, as well as the large, 75,000-strong al-Rukban refugee camp in northeastern Jordan near the borders with Iraq and Syria. In addition, an airfield may be operational soon in the Jordanian province of Mafraq, near the Syrian border, apparently for the operation of American or Jordanian helicopters that would support opposition activities in Deir ez-Zor province.

It is clear that Syrian forces are unlikely to give away control over such a critical neighborhood at the junction of Jordan and Iraq. Yet advancing toward al-Bukamal with a stretched-out group of forces that can easily be attacked by either opposition rebels or IS fighters makes it very difficult.

Pro-government formations will likely try to unite with those in Palmyra, and, accordingly, conduct operations against the opposition in eastern Qalamoun. While this would violate the truce, the regime forces will have an excuse, since this opposition enclave was not technically included from the very beginning in the “security zones” of the memorandum signed in Astana, Kazakhstan. In this case, Damascus and Iran could once again resort to calling the insurgents “al-Qaeda-associated terrorists.” At the same time, creating a “Shiite corridor” from Syria to Iraq might not only derail US-Russia talks but also trigger a counter-response from the Gulf states. None of this is a step toward a political settlement.