Syrian rebel commander: 150 US troops at al-Tanf base

In an interview with Al-Monitor, Lt. Col. Muhannad al-Talla, the commander of Maghawir al-Thawra, speaks of the role of the US-led coalition at al-Tanf military base, which is close to the border between Jordan, Syria and Iraq. 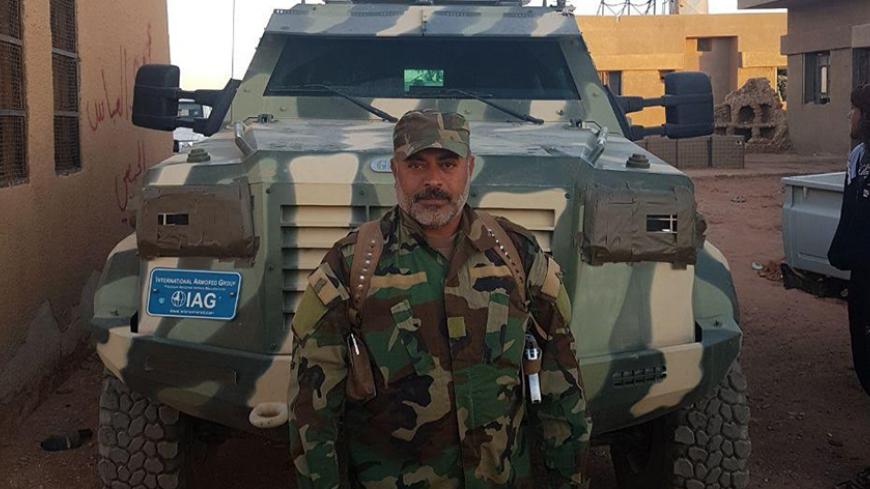 The leader of the Maghawir al-Thawra faction, Mohannad al-Talaa, is seen in an undated photo. - Muhannad al-Talla

AMMAN, Jordan — Given its location on the Syrian-Iraqi-Jordanian border triangle, al-Tanf military base is perceived to be strategic for the US-led coalition against the Islamic State (IS), and also a red line.

The military base has been used as a facility to train Maghawir al-Thawra (Revolutionary Commando Army), which was founded in May 2015 and trained in Jordan to fight IS, Lt. Col. Muhannad al-Talla, the commander of the faction, told Al-Monitor.

On May 18, the US-led coalition’s aircraft destroyed a pro-Syrian regime convoy advancing toward al-Tanf base, after ignoring warning shots. Commenting on the strike, US Secretary of Defense James Mattis said, “We are not increasing our role in the Syrian civil war. But we will defend our troops.”

Talla said that 150 US troops are stationed at al-Tanf base, in addition to troops of five different nationalities from within the ranks of the coalition — which he did not name at the request of these member states — including two Arab countries.

Al-Monitor spoke to Talla over the phone about the role of the US-led coalition at the base, the reasons behind the Russian troops’ control over areas close to al-Tanf, and the arrival of Iranian and Iraqi militias as reinforcements in the Syrian desert.

Al-Monitor:  Can you introduce Maghawir al-Thawra? How many members does it consist of? Where is it deployed? Where does the support come from?

Talla:  Maghawir al-Thawra — formerly known as the New Syrian Army — took seven months to see the light. It was founded on May 20, 2015, and its troops were initially trained in Jordanian territory. It consists of former fighters of the Free Syrian Army who fled the areas that IS managed to seize following fierce battles. Most of them fled Deir ez-Zor, al-Bukamal, Palmyra and the countryside of Aleppo.

Its initial formation amounted to 120 fighters. The number today has grown bigger, going beyond hundreds of fighters who were trained by military experts from friendly countries within the ranks of the US-led coalition. I founded the group and I am leading it. We are present in al-Hamad [in the Syrian desert] and al-Tanf area, which is near the Iraqi-Jordanian-Syrian border triangle.

The training and support are delivered by the coalition’s member states, most notably the United States.

Al-Monitor:  How important is the base in the Syrian desert, especially in the fighting against IS?

Talla:  Al-Tanf area is a key border crossing on the Iraqi-Syrian border, connecting Syria to Iraq. Al-Tanf base is a mobilization base from which Maghawir al-Thawra and the US-led coalition forces launch operations and conduct patrols in the search for IS hotbeds that are scattered in the vast al-Hamad desert.

Troops including officers of different ranks of five nationalities are present with us on the ground, most of whom are Americans — with 150 troops. They amount to hundreds of troops of friendly countries within the ranks of the US-led coalition. Their mission is to provide us with backup in our military missions, and give the new fighters physical and military training.

Al-Monitor:  What are the reasons that prompted the Syrian regime, as well as Iranian and Iraqi militias, to step up presence on the Baghdad-Damascus road?

Talla:  First, to ignite battles between the world powers, such as Russia and the US-led coalition forces. It had Russian aircraft violate Turkish airspace in order to turn Syrian territory into a battlefield involving international forces.

Second, to meet the Iranian desire of establishing a Shiite crescent stretching from Iran to Lebanon, through the Syrian and Iraqi territories, in order for the Syrian regime to secure a land bridge, which is an ancient scheme. Yet we are lying in wait.

It is a dream for them to have such a land route. Nevertheless, we are well-prepared at the military level. We have the right equipment, weapons and ammunition to win any battle. Our fighters are the most powerful; they are well-trained and equipped for any battle. We are not allowing them to make this dream come true.

Al-Monitor:  Pro-Syrian regime media outlets circulated photos of Russian flags flying over the desert of Suwayda. Which areas are under Russian control?

Talla:  The current Russian-held areas are namely al-Dumayr airport, the road leading to al-Batma area, al-Radayef Dam, Sabaa Biyar, Zaza and Khirbet Ghazaleh areas toward the south of Suwayda city near the Jordanian border. They managed to advance as the Syrian opposition forces were preoccupied battling IS.

Al-Monitor:  A decision was made during the Arab-Islamic-American summit to form a counterterrorism force of 34,000 troops. Do you expect this force to assume a role in the Syrian desert?

Talla:  Given the number of troops, this force will have a consequential role in the Syrian desert. Eliminating IS hotbeds and taking full control over such a vast area requires a large number of troops.

Al-Monitor:  How are the battles in the desert, Qalamoun and al-Tanf being reflected on political talks?

Talla:  These battles will lead the opposition to have the upper hand in the talks. The only option available for the regime is surrendering to reality. This is because all of its cards turned out to be a failure, starting with IS and ending with the Shiite mercenaries.

Al-Monitor:  How are you protecting civilians in areas under your control?

Talla:  These civilians are our people. We took up arms and sacrificed our lives for their sake and for the sake of their freedom. They are an indispensable support for us. We will provide them with all forms of protection, particularly the widows, women, elderly and children.