Recent military exercises hosted by Jordan increased the Syrian regime's suspicion about activity on its southern border, while the opposition accuses the regime and Iran of trying to create a land route from Iran to Lebanon, through Syria and Iraq. 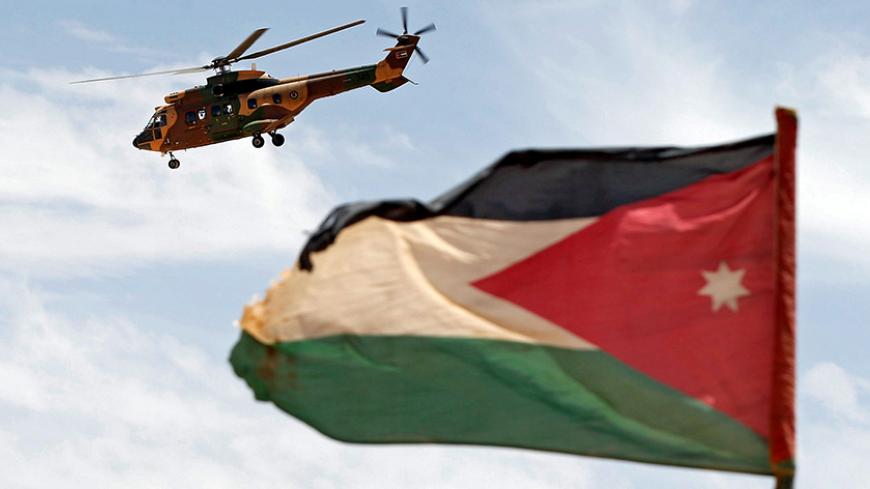 A helicopter is seen next to the Jordanian flag during the Eager Lion military exercise at the Jordan-Saudi Arabia border, south of Amman, May 17, 2017. - REUTERS/Muhammad Hamed

AMMAN, Jordan — Forces battling the Islamic State (IS) in Syria seem to be putting a lot of effort into thwarting each other's strategies.

Syrian government troops, backed by allied Iraqi and Iranian militias, are bolstering their control along parts of the Syrian-Iraqi borders. Leaders of the Syrian armed opposition factions who spoke with Al-Monitor confirmed earlier reports that the Syrian government aims to create a land passageway from Iran though Iraq to Syria, to reach Syria's oil-rich Deir ez-Zor, which has been under IS control since 2014.

The leader of Jaish Usud al-Sharqiya, a faction backed by the US-led coalition, accused the United States of “disappointing the rebels and not backing them enough to be able to tighten their grip on the areas" in the Syrian desert they had cleared of IS. Leader Talas Salama (also known as Abu Faisal) told Al-Monitor, “We liberated Rif Dimashq, the eastern part of Suwayda, Daraa countryside and the Damascus-Baghdad highway. But the regime [took] control of the areas that IS was expelled from.”

According to Syrian Central Military Media, which is affiliated with the Syrian regime, the Syrian army and its allies took over the Baghdad-Jordan-Damascus triangle in the Syrian desert on May 12 after defeating Syrian opposition factions. The army's forces also tightened the noose on the Zaza triangle and the town of Sabaa Biyar, which also were under the opposition’s control.

Meanwhile, the Syrian regime was keeping a wary eye on forces participating in the Eager Lion exercises, an annual military drill in Jordan that the United States and some 20 other countries have participated in since 2011. The exercises are designed to build a coalition capable of responding quickly to the threat of terrorism and to face the displacement of refugees. They took place in Jordan's capital Amman on May 7-18.

Abu Faisal sees a connection involving the Eager Lion exercises, the Syrian regime’s fear of a military operation in southern Syria, and the presence of international forces at al-Tanf base, which is an opposition base in Syria adjacent to the eastern Jordanian borders. The anti-terror coalition forces protect al-Tanf base. Faction leaders told Al-Monitor there are 100 British soldiers at the base who train Syrian opposition factions.

On May 18, US-led coalition planes bombed a pro-regime convoy that was heading toward al-Tanf and ignoring warning shots.

“The Syrian regime saw that there were American and British forces in al-Tanf base alongside Jaish Maghaweer al-Thawra and wanted to take a pre-emptive step," Abu Faisal said. "We have information about an Iranian-Russian agreement with the regime to secure the Damascus-Baghdad highway and open a land path for Iran and the Iraqi, Lebanese and Syrian militias through Damascus-Beirut-Baghdad-Iran in return for Russian advancement toward Deir ez-Zor to take over the oil wells.”

Because of the Eager Lion exercises, the Syrian regime and Hezbollah escalated their rhetoric against Jordan. Hezbollah described the maneuvers as “suspicious” on May 9. Syrian Foreign Minister Walid Moallem warned Jordan on May 8, saying, “We are not seeking a confrontation with Jordan, but if Jordanian forces enter our territories without coordination with Damascus, we will consider them adversaries.”

Why was the Syrian regime afraid of the maneuvers, which have taken place in Jordan for seven consecutive years now? Timing is key, military analysts and politicians told Al-Monitor, as the military presence escalates in the Syrian desert.

Amer Sabaileh, a senior political security analyst at Amman-based NAMA Strategic Intelligence Solutions, told Al-Monitor, “The Eager Lions maneuver was different this time, since it coincided with the agreement between Turkey, Iran and Russia during the Astana-4 conference [on May 3 in Kazakhstan] to establish four de-escalation zones, and the nearing settlement of the battle with IS in Raqqa and Mosul.”

Jordanian military expert and retired pilot Mamoun Abu Nowar told Al-Monitor, “The Eager Lion exercises are routine, preset practices, but the Syrian regime was afraid upon seeing the Jordanian, British and American troops. The regime seeks to reach the Iraqi borders near al-Qaim and Deir ez-Zor through its operation in the Syrian desert and was scared the troops would attack it and obstruct this strategic plan that has become much needed.”

Abu Nowar said he expects the "Arab NATO" forces — discussed during the May 21 summit between US President Donald Trump and Arab states in Riyadh — to take control of al-Qaim and Deir ez-Zor (in addition to controlling al-Tanf) in a bid to halt the Iranian threat and establish safe zones in the Syrian territories adjacent to Jordan.

The scenario of the anti-terror coalition forces blocking a land crossing between Iran and Lebanon is possible, according to Abu Nowar, who warned that this “might lead to sectarian wars in the region.”

Analysts say Jordan is concerned that IS, after losing territories it controlled in Iraq and Syria, will retreat to the Syrian-Jordanian borders in the desert adjacent to the Iraqi borders.

Mohammad al-Momani, a spokesman for the Jordanian government, said in a May 8 interview on state TV, “Jordan will take all diplomatic and necessary measures of defense in Syria to protect its borders.” On May 9, pro-regime media outlets broadcast aerial images of British and US military troops amassing near the Jordanian border, toward the Syrian desert.

Syria's former ambassador to Jordan, Bahjat Suleiman, who was expelled from the country in 2014, wrote on Facebook May 13, “Jordan has been notified that the Russian air force will intervene to support the Syrian forces and to destroy the attackers in case of any blunders.”

The final statement of the Arab-Islamic-American summit in Riyadh announced that Arab states are ready to “provide 34,000 soldiers as reserve forces to back the anti-terrorism operations in Syria and Iraq.”

In a December BBC interview, Lt. Gen. Mahmoud Freihat, the chairman of Jordan's Joint Chiefs of Staff, said Jordan was concerned even then about a possible expansion toward Syria of Iraq's Popular Mobilization Units near Tal Afar in northwest Iraq, and the "creation of a land belt connecting Iran to Lebanon.” Both would serve as warnings of Iran's growing threat to Sunni states, especially the Gulf countries, he said.

Jordan and Syria share borders stretching along 378 kilometers (235 miles), and Jordan declared these borders a closed military zone following the June Rukban bombing, when an IS truck exploded, killing 20 people, including seven members of the Jordanian border guard.