Jordan pins hopes on US-Russian accord on southern Syria

Amid talks about secret trilateral meetings being held in Amman between Jordan, the United States and Russia to establish a de-escalation zone in southern Syria, Jordan would reject the presence of Islamic State militants on its northern borders, or fighters supported by Iran. 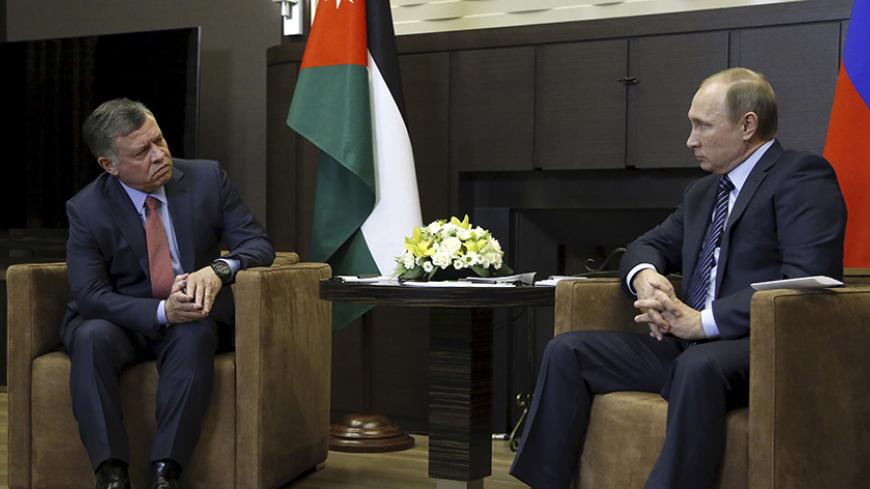 Jordan is intensifying diplomatic efforts to help forge an agreement between the United States and Russia to establish a safe or de-escalation zone in southern Syria. Jordan hopes to prevent the vast Syrian Badia area, which extends along Jordan’s northern borders with Syria, from turning into a battlefield involving US-led coalition forces and rebel allies on the one hand, and regime and Iran-backed militias on the other.

Jordanian and US sources have confirmed that US and Russian officials met in Amman sometime late May. “The meeting in Jordan was one part where the United States and Russia, Israel and Jordan can work together to have [a] de-escalation zone in the south of Syria,” one US source, who requested anonymity, told Al-Monitor.

Local newspapers reported May 30 that Jordan is participating in the talks to determine the nature of the safe zone and the composition of the forces that will be deployed. The reports said that Jordan would agree to any force stationed on its northern border except for Islamic State (IS) fighters or militia forces supported by Iran. They noted that a new round of talks will resume soon.

Russia, Turkey and Iran agreed May 4 in Astana to create four de-escalation zones in Syria, including one in southern Syria. The United States was not part of the agreement, but its participation in the Amman talks signals its eagerness to be part of an understanding with Moscow to set up security arrangements in southern Syria, primarily to protect Jordanian and Israeli interests. The United States, along with other Western nations, maintains military presence at al-Tanf base in southeast Syria close to the borders with Iraq and Jordan. The base is used to train and supply US-backed rebel groups, collectively known as the New Syrian Army, which is comprised mainly of local tribes in the Badia region.

Al-Tanf is located on the Damascus-Baghdad highway and therein lies its strategic value for the United States, the Damascus regime and Iran. On May 18, coalition planes hit a pro-Syrian government convoy after firing warning shots and when Russia failed to dissuade those troops from moving into the de-conflicted area near al-Tanf. Following that incident, the United States imposed a 55-kilometer (34-mile) safe zone around the base and boosted its combat power.

Still, Syrian government forces and allied militias have taken a town about 50 kilometers from al-Tanf in late May, while Russia reported May 21 that it has placed paratroopers in the Suwayda province in southern Syria to “take the role of advising the Syrian government troops in the area.” On May 29, Iran’s Foreign Ministry announced that Tehran was ready to dispatch troops to Syria to monitor compliance with the May 4 agreement with Russia and Turkey to create four de-escalation zones in Syria.

For Jordan, the stability of southern Syria, which borders Jordan, is a top national security goal. Having denied Syrian allegations that it was part of a US plan to invade southern Syria, Jordan's Chairman of the Joint Chiefs of Staff Mahmoud Freihat reiterated June 1 that the Jordanian army will not have any presence inside Syria. But Jordan wants Washington and Moscow to agree to make southern Syria free of Iran-backed militias as well as IS militants. The United States is reported to have insisted that it wants the area from Quneitra, on the Syrian-Israeli border, through Suwayda to al-Tanf free of Iran-backed militias such as Hezbollah and the Iranian Islamic Revolutionary Guard Corps, with only symbolic regime presence on the border crossing with Jordan.

For Iran and Bashar al-Assad’s regime, the US-Jordanian demand is problematic at best. Tehran has been accused by Jordan and the United States of attempting to create a land corridor that extends from Iran, via Iraq and Syria, to Lebanon. Al-Tanf is crucial for the Iranian plans. For Damascus, there are fears that a US military presence in northeastern Syria could extend to the south once IS militants are driven out of Raqqa.

The border triangle around al-Tanf is quickly becoming a potential conflagration point. On June 2, reports spoke of an infiltration by the Iranian-backed Popular Mobilization Units (PMU), comprised mostly of Iraqi Shiites, into Syrian territory near Hasakah. The PMU is believed to be trying to reach the strategically important Syrian city of Deir ez-Zor in eastern Syria, which is still controlled by IS. From Deir ez-Zor, the PMU can then link up with Syrian government forces and move to the Abu Kamal border crossing with Iraq and control the northern part of Syria’s Badia area. That area has become a point of tension recently between the US-led coalition and Iranian-backed militias.

Amid these fast-developing events on the ground, the Amman trilateral talks assume additional importance. Political analyst Oraib al-Rantawi believes that the talks will succeed in reaching an agreement that essentially satisfies both Moscow and Washington. He wrote in Ad-Dustour daily May 31 that Russia has now accepted US presence in al-Tanf and will agree to the demand that southern Syria be free of IS and Iran-backed militias. In return, Russia wants the Syrian army to raise its flag over the border crossing with Jordan and extend its control of Daraa province.

On June 2, it was reported that the Syrian army had dispatched a sizeable force toward Daraa, the old part that is under the control of rebels who are part of Jabhat Fatah al-Sham, formerly al-Qaeda-linked Jabhat al-Nusra. This appears to be in accordance with the trilateral Amman talks, but Rantawi cautioned in another piece in Ad-Dustour on June 4 “a major offensive in Daraa could also be an attempt by Damascus and Tehran to sabotage a Russian-American agreement.”

Political commentator Mohammad Abu Rumman is optimistic about the outcome of US-Russian talks on southern Syria. He wrote in Al-Ghad daily May 30 that creating a safe zone that extends from Quneitra in the west to al-Tanf in the east is good news for Jordan. “It fulfills our strategic objectives including the return of Syrian refugees, reopening our borders with Syria, removing the terrorist threat from our northern borders and reviving plans for reconstruction in southern Syria,” he noted. He added that the real challenge to this understanding lies with Iran and the regime. “On the other hand, such an understanding raises fears that it will be the first step toward the partition of Syria,” Abu Rumman wrote.

His fears were echoed by Russian President Vladimir Putin May 30, who, while praising the de-escalation zones, expressed hope that “these zones do not become a prototype for the future territorial division in Syria.”