Will Jordan confront IS in southern Syria?

Some analysts say that recent movements and activities by the Islamic State near the Jordanian border could push Jordan to intervene militarily in southern Syria. 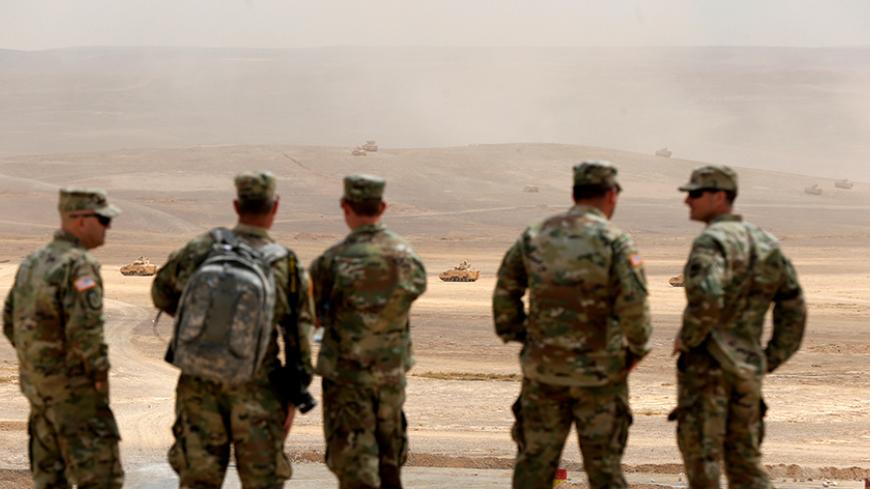 US soldiers take part in Exercise Eager Lion at one of the Jordanian military bases in Zarqa, east of Amman, Jordan, May 24, 2016. - REUTERS/Muhammad Hamed

Jordan could be preparing for joint military operations with US and British special forces against Islamic State (IS) militants in southern Syria following King Abdullah’s meeting with President Donald Trump at the White House on April 5. The talks dealt with a number of issues but centered on the US-led fight against the terrorist group, the creation of safe zones in Syria and Jordan’s role in both. In his interview with The Washington Post the same day, the king alluded to Jordan’s readiness to deal with threats to the kingdom’s northern borders, saying that “non-state actors from outside coming toward our border are not going to be tolerated.”

There are fears that as IS militants flee Mosul and Raqqa, many will head toward the vast Syrian Badia extending from Deir ez-Zor in eastern Syria to the Jordanian border in the south. A recent US congressional report estimated the number of Jordanians who have joined IS in Iraq and Syria since 2011 at 4,000. Other estimates put the number of Jordanians fighting with IS at between 500-3,000. Regardless of the exact figure, pundits here believe many will try to come back to carry out terrorist attacks in Jordan.

But there was no official comment on reports that US and British special forces have been deployed in north Jordan along the borders with Syria. Russian Foreign Minister Sergey Lavrov said April 14 that Moscow was following news that the US has deployed troops on Syria’s southern borders and that it was seeking clarifications. On April 15, Jordan’s armed forces announced that they will carry out their annual joint military exercises, called Eager Lion, with the United States and 22 other nations between May 7-18.

On the same day the king and Trump met, IS released a 20-minute video featuring four Jordanian militants issuing direct threats to the regime and calling on their followers to carry out attacks against army, police and security targets. They celebrated December’s Kerak castle attack, where IS militants killed nine security personnel and one Canadian tourist. The video ended with the horrific beheading of four Syrians who the militants claimed were trained in Jordan to fight IS. Jordan supports the so-called New Syrian Army (NSA), which is mainly made up of local Syrian tribes and Free Syrian Army (FSA) members in the south of the country. Amman has made it clear on a number of occasions that the NSA’s objective is to fight IS and other militant groups and not the Syrian regime.

While local authorities did not comment on the IS video, there are signs that they are taking the threats seriously. Security around churches was beefed up on the eve of Easter celebrations following the suicide attacks against churches in Egypt on April 9, for which IS claimed responsibility. And since the Kerak attack, the authorities have rounded up dozens of IS sympathizers as a precautionary measure.

Jordan is particularly worried about the presence of IS militants in a makeshift Syrian refugee camp at Rukban, a few kilometers from its northern borders. The group had carried out a suicide attack against a Jordanian post from the camp in June, killing six soldiers. And on April 10, US, British and Syrian opposition forces repelled a surprise attack by IS fighters at al-Tanf base on the Syrian-Jordanian border. US and British special forces are using the base. One pro-Damascus news site claimed Jordanian soldiers had also participated in the operation.

But the biggest threat may come from the so-called Khalid Ibn al-Walid Army, which pledged allegiance to IS in 2016 and is now in control of a number of villages in the Yarmouk River basin a few kilometers from the Jordanian border, not far from Jordan’s second largest city of Irbid. The 1,500-strong fighting group is said to be in possession of artillery and T-55 tanks. Jordan is also alarmed by the presence of Iranian-backed militias and Hezbollah fighters in southern Syria. Abdullah, in the Washington Post interview, said Iranian Revolutionary Guards were 70 kilometers (43 miles) from the Jordanian borders. “If it is bad news for us, you have to put the Israeli equation into this,” he said.

Adding to Jordan’s growing apprehension is the fact that Sham Liberation Headquarters (SLH), led by Hayat Tahrir al-Sham (Liberation of the Sham Committee), formerly Jabhat al-Nusra, has made significant gains in the southern Syrian city of Daraa as recently as April 15. Hayat Tahrir al-Sham is labeled as a terrorist organization with links to al-Qaeda and is not involved in the Geneva and Astana political processes. Jordan had reached an understanding with Russia to pacify southern Syria and deliver moderate Syrian opposition groups there to the Astana cease-fire talks. The Daraa confrontations, which have been raging for weeks, have complicated Jordan’s plans in southern Syria since other jihadi groups are now a few kilometers from the kingdom’s borders with Syria.

Former Minister of Information Samih al-Maaytah told Al-Monitor that Jordan has long been preparing for a possible direct confrontation with IS militants. “We have over 600 kilometers of borders with Syria and Iraq, and we have managed to protect ourselves so far,” he said. “But Jordan will not hesitate to go into an open war against IS outside our borders, because the group threatens us directly.”

But retired army general and military analyst Hafez al-Khasawneh does not think Jordan will be involved in a large-scale military operation inside Syria. He told Al-Monitor, “IS will not risk an open confrontation with the Jordanian army, but will resort to carrying out terrorist attacks like the Kerak one. So I expect our armed forces to launch hit and withdraw operations along the borders or inside Syria.”

Still, there are fears that the recent buildup in the north could lead to a costly military involvement in southern Syria, something that could drag Jordan into the Syrian quagmire. Political analyst Oraib al-Rantawi wrote in Ad-Dustour daily April 11 that a joint military operation in southern Syria to create safe zones and drive IS militants away is risky. “What about the possibility of clashing with the Syrian army, Hezbollah or Russian forces?” he asked. “We should think carefully about the possibility of finding ourselves stuck in a war of attrition as we try to maintain control of this vast area.”