The Dec. 30 BBC interview with Lt. Gen. Mahmoud Freihat, the chairman of the Joint Chiefs­ of­ Staff, raised eyebrows in Amman and prompted local commentators to speculate about the purpose and meaning of Freihat’s statements. 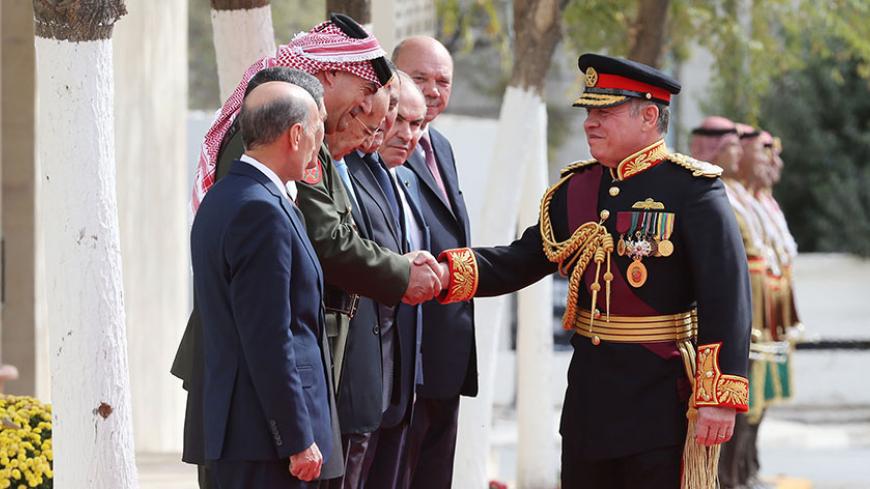 Jordan's Chairman of the Joint Chiefs of Staff Mahmoud Freihat (L) shakes hands with King Abdullah upon the Jordanian king's arrival for the state opening of the parliament in Amman, Nov. 7, 2016. - Jordan Pix/Getty Images

Senior Jordanian military officials traditionally keep a low public profile and almost never make political statements or give in-depth military assessments of local or regional issues, especially to the media. So it was unusual, and unexpected, for the chairman of the Joint Chiefs­ of­ Staff, Lt. Gen. Mahmoud Freihat, to give an exclusive 16-minute interview to BBC Arabic Dec. 30. The precedent was a remarkable incident in itself, but it was the content of the rare interview that raised eyebrows in Amman and prompted local commentators to speculate about the purpose and meaning of Freihat’s statements.

The interview came in the wake of the terrorist attack in the southern city of Karak Dec. 18, resulting in 10 civilian and security deaths, and public complaints that the government had failed to provide consistent information about the home-grown terror cell that was uncovered by accident. The interview was also released following the fall of eastern Aleppo in Syria Dec. 16, and the evacuation of rebel fighters there to their stronghold in Idlib.

Some of the points that Freihat had made in the interview are listed below:

No Jordanian official, except for King Abdullah, has ever made such a detailed assessment of the military and geopolitical situation in light of what is happening in Syria and Iraq. Freihat’s revelations raised questions about the timing of these statements and whether they were intended to deliver political messages to the Syrian regime.

On Jan. 1, political commentator Maher Abu Tair wrote in Addustour daily that Freihat sent three assurances to Damascus: that Jordan played no role against the regime, that Jordan will not open the border unless the Syrian army takes control and that diplomatic relations were never severed. But Abu Tair stressed that Freihat was determined about Jordan’s intentions to confront threats from terrorists in the Yarmouk River basin, which could include pre-emptive strikes inside Syria.

The following day, political commentator Mohammad Abu Rumman wrote in Al-Ghad daily that Freihat’s warning about the realization of a “land route” connecting Iran to Lebanon through Iraq and Syria underlines the “strategic depth of Jordan’s reading of future regional developments.” He also questioned Freihat’s estimates of the number of Jordanians fighting in Syria and said other sources put that figure “at many multiples of just 300.”

Bassam Badarin, a correspondent for the London-based Al-Quds daily, wrote Jan. 4 that the question of why a senior military official, and not a high-level government figure, would come out and talk in detail “about an imminent IS threat to Jordan and an Iranian land belt extending to Lebanon at this point in time remains an unanswered question.” He said that Freihat’s statements on Iran firmly place Jordan in the anti-Tehran trench in line with Saudi Arabia.

Retired Jordanian general and military analyst Fayez al-Duwairi told Al-Monitor that Freihat’s statements carried messages to domestic and foreign audiences alike. According to Duwairi, internally, they underlined the challenge that IS terrorists pose to Jordan either in the form of a homegrown threat or as an external danger lurking close to the kingdom’s borders. He said, “The main internal message is that Jordan is in the crosshairs of IS terrorists; but the external message points to Iran’s emerging threat to mainly Sunni states, and this is something that King Abdullah had warned us of many years back when he talked about the Shiite Crescent.”

Political commentator Omar Kulab agreed that Freihat’s interview was intended to deliver messages to many recipients. He told Al-Monitor that the choice of a high-ranking military official, rather than a senior government official, was meant to give credibility to his statements. “There was a dual message: one conciliatory to the Syrian regime and the other to the Gulf states. And the bottom line is that there was no contradiction in the Jordanian position — that while appeasing Damascus, Amman remained wary of Iran’s regional ambitions,” Kulab said.

He added, “A message of assurance to the Jordanian public [in the aftermath of the Karak incident] would be better received locally from the head of the armed forces, which enjoys trust and support.”

In the absence of government follow-up to Freihat’s statements and the significance of the BBC interview, Jordanians continue to ask questions about its purpose, timing and the messages it was supposed to carry. There had been no reaction from Damascus in spite of the conciliatory tones of the statements. For the time being, a response to Freihat’s overtures is yet to come.