Why is Jordan shifting its Syria strategy?

Jordan has joined the Astana process and is signaling a change in its position toward Damascus. 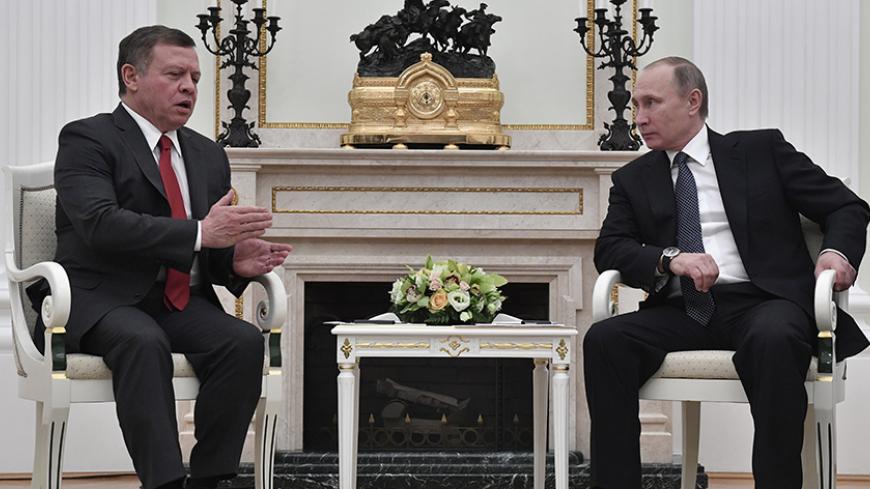 There are strong signals coming from Amman that Jordan is calibrating its strategy on Syria in light of recent political and military developments. At the heart of this shift lies Jordan’s readiness to chart a more independent course in dealing with the regime of Syrian President Bashar al-Assad, using King Abdullah II’s good working relationship with Russian President Vladimir Putin to secure a cease-fire in southern Syria, initiate reconciliation efforts between the regime and moderate rebel groups and tribal leaders in the south, and focus military efforts on fighting the Islamic State (IS) and Jabhat Fatah al-Sham (formerly Jabhat al-Nusra) in the Syrian Badia.

Before heading to Washington Feb. 2 on a working visit that culminated in a meeting with US President Donald Trump, Abdullah stopped in Moscow Jan. 25 to discuss the situation in Syria with Putin, Jordan’s role in fighting terrorism and the political process on Syria that was launched in the Kazakh capital of Astana on Jan. 15. The king also brought up the situation in southern Syria, whose stability is directly linked to Jordan’s national security.

On previous visits to Moscow following Russia’s military intervention in Syria in September 2015, Abdullah and Putin had reached what was described by local observers as a “gentleman’s agreement” to spare southern Syria military strikes and allow Jordan to use its influence with Free Syrian Army groups and local tribes to prevent the advance of jihadi fighters and facilitate the handover of border crossings to the regular Syrian army.

Following the fall of eastern Aleppo in December and the slow advance of the Iraqi army to liberate IS-held Mosul, Jordan wants to make sure that fleeing IS militants do not head to the Syrian Badia, inching closer to its borders. Two makeshift refugee camps on the Syrian side of the border with Jordan represent an ongoing threat to the kingdom. Jordan believes both camps have been infiltrated by IS fighters and may be used as a launching pad for strikes against it. Last October, IS claimed responsibility for a suicide car bomb attack that killed and injured a number of security personnel manning a humanitarian entry point to the Rukban camp.

During his meeting with Trump, Abdullah was briefed on the possibility of establishing safe zones in Syria, and the president highlighted Jordan’s critical contributions to defeating IS, according to a White House statement. While Jordan has not officially reacted to Trump’s vague proposal, Amman has an interest in seeing such safe zones established in southern Syria. Jordan hosts more than 600,000 Syrian refugees at a huge financial cost, and setting up safe zones inside Syria could encourage some of them to return voluntarily to their homes.

What is more important, however, are the positive messages Amman has been sending to the Syrian regime. On Dec. 30, the chairman of the Joint Chiefs­ of­ Staff of the Jordanian armed forces, Lt. Gen. Mahmoud Freihat, told BBC Arabic that liaison officers from both sides remain in touch and that Jordan’s training of Syrian rebels in the south is aimed at fighting IS terrorists, not the regime in Damascus. He also warned of an “Iranian land corridor,” extending from Tehran to Lebanon, through Iraq and Syria. On Feb. 9, Bassam al-Badareen, the Amman correspondent of London-based Al-Quds al-Arabi, reported that top Syrian security official Gen. Ali Mamlouk had secretly visited the Jordanian capital at least four times in the past few months.

When the Syrian uprising erupted in March 2011, Jordan supported rebel demands but insisted on a political solution. It later joined the Friends of Syria group, which demanded Assad's removal. It also allowed the establishment of a US-led Military Operations Center near Amman that coordinated rebel operations in southern Syria. There have been unconfirmed reports that Jordan has scaled back the center's activities in recent weeks as part of its attempt to open back channels with Damascus.

On Feb. 4, the Jordanian armed forces announced that its unmanned fighter planes had destroyed various IS sites in southern Syria, including one that the jihadis had seized from the Syrian army. Damascus, which had previously criticized Jordan for its support of Syrian rebel groups, did not comment on the operation.

In another sign that Amman is strongly backing the Astana process, Jordanian officials joined a technical meeting on the Syrian cease-fire in the Kazakh capital on Feb. 6. It was the only Arab country that Moscow invited to the meetings. The pro-government daily Addustour quoted Russian Foreign Minister Sergey Lavrov as saying Feb. 13 that Jordan is helping in bringing additional factions into the Astana process. A day later, the same paper reported that Lavrov had again stressed Jordan’s role in influencing a number of groups in the Southern Front. Jordan has confirmed its participation in the second round of Astana talks Feb. 15-16.

In a meeting with Jordanian journalists Feb. 5, Abdullah stressed the importance of having the cease-fire in place in southern Syria, according to the Jordan Times. The government has not, however, commented on the sudden eruption of fighting Feb. 13 in the divided city of Daraa between the regular Syrian army and a number of rebel groups led by Jabhat Fatah al-Sham.

Political commentator Mohammad Abu Rumman wrote in Al-Ghad Feb. 6 that two direct developments have forced Jordan to adopt a new military-strategic approach to southern Syria. One is the presence of the so-called Jaish Khalid Ibn al-Walid army, an IS affiliate, in the Yarmouk River basin, not far from the Jordanian border. The other is the series of terrorist attacks that took place in Jordan last year and were claimed by IS. “IS had not targeted Jordan directly in the past, but with this shift, we now find ourselves in an open war with this group,” Abu Rumman said.

By joining the Astana process and signaling a change in its position toward Damascus, Jordan is looking out for its own interests in anticipation of the Russian-sponsored political talks firming up and expanding the cease-fire, paving the way for the Geneva talks that will start Feb. 23. Preserving peace and stability in southern Syria and protecting Jordan's northern borders are now Amman's top priorities, as Foreign Minister Ayman Safadi announced Feb. 9. He denied having had contacts with Tehran on safeguarding Jordan’s northern border. Both Washington and Moscow are supportive of Jordan’s balancing act on Syria — for now.