Jordan seems worried the fighting in Syria’s eastern Ghouta could hit near its borders amid claims of strikes by Syrian jets against rebel-held areas in Daraa. 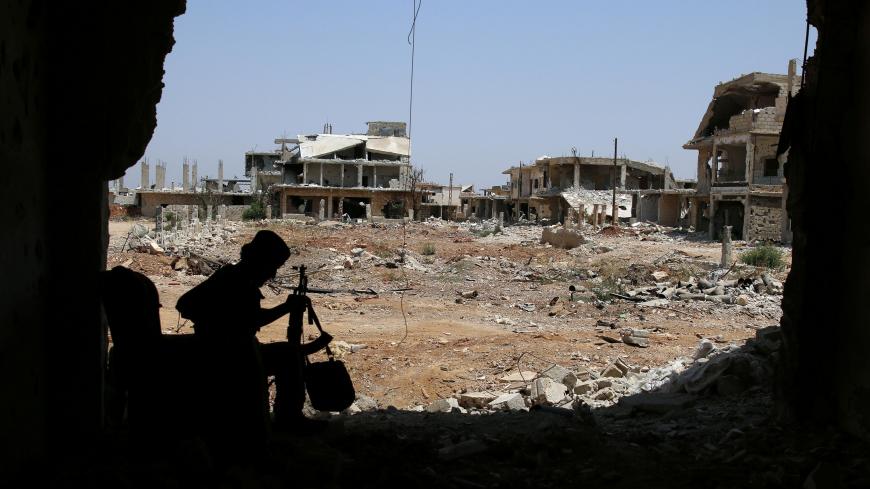 Jordan is keeping a close eye on the situation in Syria’s eastern Ghouta amid growing fears that the Syrian regime’s next move will be against the southern province of Daraa along the kingdom’s borders. On March 6, Foreign Minister Ayman Safadi called for an immediate cease-fire in eastern Ghouta and an end to the suffering of the Syrian people.

The UN Security Council has failed to implement a resolution adopted Feb. 24 to impose a truce throughout Syria. On March 12, the United States submitted a new draft resolution to council members calling for an immediate 30-day cease-fire in the capital of Damascus and the suburbs of eastern Ghouta.

Most of southwest Syria is part of a de-escalation zone agreed to in July by the United States, Russia and Jordan. The province, along with the city of Daraa, is divided between regime forces and rebel groups — the latter controlling the Nasib border crossing with Jordan.

On March 12, residents and rebel groups claimed that Syrian jets carried out at least eight strikes against rebel-held areas in Daraa, not far from the town of Izraa, where the Syrian army maintains a considerable presence. If confirmed, the strikes would be the first to take place since the multilateral truce was adopted.

Reacting to these reports on March 12, the US State Department called for an urgent meeting in Jordan to discuss concerns about alleged strikes in southwestern Syria within the boundaries of the de-escalation zone negotiated last year. “We have called an urgent meeting in Jordan to review the situation in southwest Syria and ensure maintenance of the de-escalation zone that the United States helped negotiate,” a department official said in a statement.

Jordan is yet to comment on these reports. On March 13, the Jordan Times quoted a government official as saying that Amman was coordinating with the United States to hold “an emergency meeting with the kingdom over reports of violations to the deal that established a de-escalation zone in southwestern Syria.” The official was also quoted as adding, “Jordan was very keen on sustaining the de-escalation zone that was created last year following a tripartite agreement involving Russia.”

The situation in southwest Syria represents a crucial national security concern for Jordan. A collapse of the de-escalation zone there and an attempt by the Syrian army and allied militias to take over the region would sound alarm bells in both Jordan and Israel. For Jordan, clashes and fighting along its northern borders could send thousands of Syrian refugees into the kingdom, which is already hosting at least 600,000 Syrian refugees out of 1.2 million Syrians residing in the kingdom.

Jordan has repeatedly complained that hosting Syrian refugees has stretched its resources and complicated its economic recovery. It has also stated that it could no longer receive additional refugees. The Jordanian economy has been under pressure for years with unemployment and poverty rates reaching record levels.

In addition, deterioration in the security situation in southern Syria would exasperate humanitarian conditions there. On Feb. 26, the Daraa Municipal Council refused to allow aid convoys to enter from government-held areas, insisting that aid should come through “regular routes across border points with Jordan.”

King Abdullah has in the past praised the success of the truce agreement in southern Syria. After his recent visit to Moscow on Feb. 15, where he met with President Vladimir Putin, it was reported that Russia had asked for Jordan’s help in stabilizing the situation in the southern safe zone. In October, Jordan failed to convince rebel groups in Daraa to hand over the Nasib border crossing to the Syrian government. Since the middle of last year, when the United States cut its financial and military support to Syrian rebel groups — including the Free Syrian Army — Jordan’s sway over these groups also decreased.

It is not clear if the recent government raids in Daraa represent the beginning of a large-scale military operation there or if they were meant as a warning to rebel groups not to intervene in the eastern Ghouta fighting. A number of rebel factions, such as Jund al-Malahim in southern Syria, had vowed to carry out attacks on the Syrian army and allied militias in retaliation for the bombardment of eastern Ghouta. On March 3, the pro-rebel Syrian news website Enabbaladi said members of Jaish al-Islam in the south were mobilizing to target the Syrian army in solidarity with their comrades in eastern Ghouta.

The possible collapse of the de-escalation zone in southwest Syria would be a game changer for both Israel — which had criticized the trilateral agreement for failing to stop Iran’s ambitions in Syria — and for Jordan. Israel and Jordan are worried that pro-Iran militias, including Hezbollah, will take up positions close to the Golan Heights and Jordan’s northern borders.

Retired Jordanian army general and military analyst Fayez al-Duwairi told Al-Monitor that the situation in southern Syria differs from that of eastern Ghouta. “In the south, there are many players such as Jordan, the United States, Russia, Iran and Israel,” he said. “The United States and Russia will take Israel’s interest, as well as that of Jordan, into account, and no one wants to see an Israeli-Iranian confrontation in southern Syria.” In his view, “Jordan and Israel view pro-Iran militias as being as dangerous as Jabhat al-Nusra and the Islamic State [IS].”

But political analyst Omar Kulab said the “liberation of Syrian territory could extend to southern Syria following the recapture of eastern Ghouta.” He told Al-Monitor that Jordanian interests come first and “it is in our interests to purge our northern borders and reopen the border crossing with Damascus.” He pointed to the presence of the IS-linked group Jaysh Khalid Ibn al-Waleed in the Yarmouk River basin.

Orieb al-Rintawi, the head of the Amman-based Jerusalem Center for Political Studies, told Al-Monitor that Israel could be using Jabhat al-Nusra in southern Syria to confront pro-Iran militias that may try to come close to the Golan. “This further complicates things for Jordan because any military faceoff in the south will be within a few kilometers from Jordanian borders,” Rintawi said. Claims that Israel has provided military aid to jihadi rebels in southern Syria have circulated since former Mossad chief Efraim Halevy said in 2016 that Israel was treating wounded rebel fighters. Yet Israeli officials have vehemently denied allegations that it has provided armed support.