With reports that Iranian militias have withdrawn from southern Syria and the army is preparing to launch a military assault against rebels there, Jordan fears the cease-fire agreement could be jeopardized. 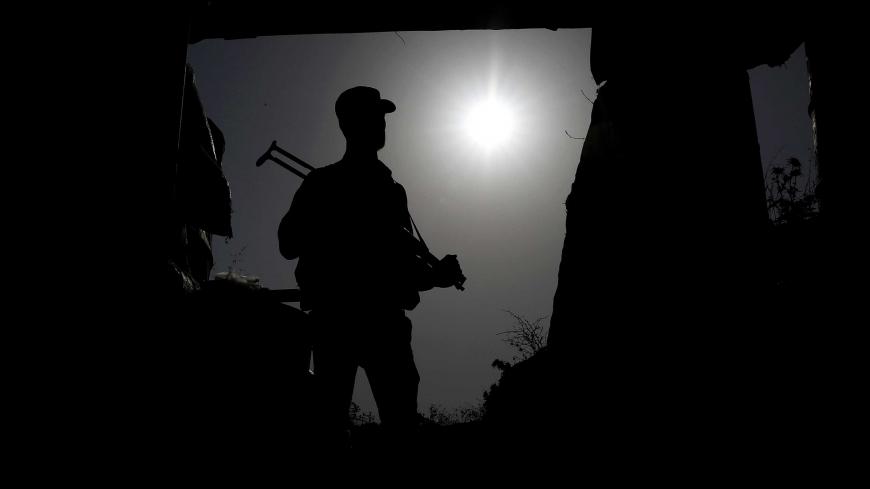 A fighter from the Free Syrian Army is seen in Yadouda area in Daraa, Syria, May 29, 2018. - REUTERS/ Alaa al Faqir

The Syrian regime’s position on southern Syria, in particular the rebel-held Daraa province that is part of a de-escalation zone, remains vague following reports last week that Damascus was preparing to launch a major military operation there. Jordan, one of three signatories — in addition to the United States and Russia — to an agreement adopted in November that imposed a cease-fire in southern Syria, is closely following up on developments.

“Jordan wants the de-escalation zone created in [the] south of Syria to remain intact, and we believe that these zones have led to positive results and helped reach a cease-fire in Syria,” an unnamed government source told the Jordan Times on May 27.

On May 28, Reuters quoted an unnamed Jordanian official saying that Jordan is confident that Russia will not allow President Bashar al-Assad’s government to wreck a cease-fire in southern Syria. He said that Russia, the United States and Jordan still see “eye to eye” on the need to preserve the cease-fire.

The Jordanian position followed a strong warning May 25 by the US State Department that the United States was ready to take “firm and appropriate measures” in response to cease-fire violations. The statement was made following news reports that the Syrian army was preparing to move south after a series of victories that ended rebel presence in areas surrounding the capital, Damascus. On May 25, Agence France-Presse reported that the Syrian air force had dropped leaflets over Daraa province warning of an imminent military operation and calling on fighters to drop their weapons. The leaflets also gave fighters a choice between dying and surrendering, and called on rebels to embrace reconciliation while offering to protect civilians.

Jordan and Israel, which share borders with southern Syria, have repeatedly warned that they will not allow the deployment of Iranian militias and Hezbollah fighters close to their borders. Israel wants all pro-Iran militias to leave Syria. On May 28, Russia’s Foreign Minister Sergey Lavrov was quoted by Haaretz as saying that only Syrian government troops should be deployed on Syria’s southern border. His statement came a day after the same paper reported that Israel believes Russia is ready to talk about a significant distancing of Iranian forces and allied Shiite militias from the Israeli-Syrian border.

Iran’s Ambassador to Amman Mojtaba Ferdosipour told Jordan’s Al-Ghad newspaper May 23 that Iran has no military presence in southern Syria or along the borders with Jordan and Iranian forces and militias will not take part in any military operation by the Syrian army there. Ferdosipour said Iran supports the de-escalation zone in the south.

On May 22, a pro-opposition Syrian news site — Enab Baladi — claimed that Shiite militias, including Hezbollah, have withdrawn fighters from Daraa province and regular Syrian army troops have been deployed in their place.

Iran has denied a May 27 report by Saudi news site Elaph that claimed Tehran was negotiating indirectly with Israel through a Jordanian mediator. Elaph said it has learned that secret negotiations between the two countries have resulted in an Iranian commitment not to participate in military operations in southwest Syria. But on May 28, Iran’s Foreign Ministry spokesman Bahram Qasimi described the report as fabricated, adding that Tehran does not recognize the “Zionist and terrorist entity.”

While the Damascus government has not commented on its operations in southern Syria, a Syrian diplomat in Amman announced May 26 that the regime does not need to launch a military operation against militants in southern Syria. Ayman Alloush, charge d’affaires at the Syria Embassy in Amman, was quoted by a local news site as saying the problem in southern Syria can be solved peacefully through dialogue, thanks to Jordanian efforts with rebel groups. Aloush said that according to the de-escalation agreement, armed groups will be allowed to remain in southern Syria.

Fayez al-Duwairi, a retired Jordanian army general and military analyst, told Al-Monitor that following the US warning to Syria and reports that Iranian militias have withdrawn from the southern parts of the country, the possibility of a major military operation has subsided. But he added that there could be still an agreement by the United States, Russia, Jordan and Israel to allow the Syrian army to extend its control so that it can reopen the border point of Nasib between Jordan and Syria. “Jordan has an interest in the reopening of borders with Syria and in concluding a peaceful agreement between the rebels and the regime in Daraa,” Duwairi said.

A possible breakthrough could still happen as Russian Deputy Foreign Minister Mikhail Bogdanov announced May 29 that Russia, the United States and Jordan will hold a meeting on Syria’s southern de-escalation zone. No date and location were set.

With Russia’s assurances that only the Syrian army will be allowed to deploy in southern Syria and reports that Iranian militias have pulled back, it is difficult to see how the US position can be justified. A peaceful deployment should spare Daraa carnage and destruction, which in the long run is in the interest of Jordan, according to Duwairi.