The cease-fire brokered by the United States, Russia and Jordan for southern Syria seems to be holding, for now. 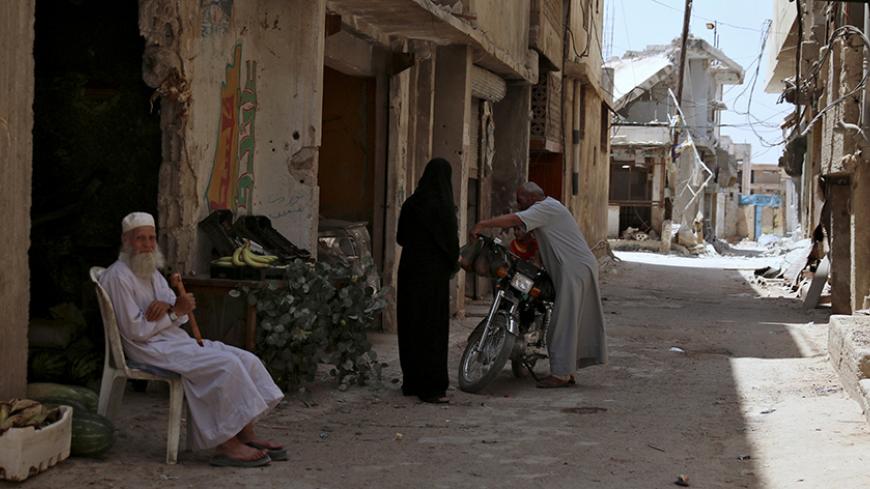 An elderly man sits in front of a vegetable shop near damaged buildings two days after a cease-fire went into effect in the province of Daraa, Syria, July 11, 2017. - REUTERS/Alaa al-Faqir

Big accomplishments come in incremental steps. At least that is the lesson that Jordan has learned as it has tried to cope with the six-year-old turmoil across its northern border that has brought untold security, economic and humanitarian challenges to the kingdom. That is also how pundits in Jordan are viewing the trilateral deal among the United States, Russia and Jordan to implement a cease-fire in areas of embattled southern Syria, announced in Hamburg July 7 after a meeting between US President Donald Trump and Russian President Vladimir Putin. Amman deserves some credit for the breakthrough.

Direct talks between the United States and Russia, with Amman's participation, have been taking place in the Jordanian capital since May to reach an understanding to stop the violence in southern Syria, fulfill Jordanian (and Israeli) security concerns and comply with Russian commitments to the Syrian regime — at least in the short run.

The cease-fire went into effect July 9 at noon local time. For the first time in months, perhaps even more, an eerie silence surrounded Daraa and Quneitra on the Golan Heights and the vast, black lava desert of Sweida. 24 hours later, the cease-fire was still holding, despite unconfirmed opposition reports that the regime had bombed rebel areas in Sweida.

Details of the trilateral deal remain vague. None of the parties has divulged any substantial information. London-based Al-Hayat on July 8 quoted an unnamed US source as saying that the Washington-Moscow “agreement” stipulates that Syrian President Bashar al-Assad will remain in power and Iranian actors will be kept far from southern Syria. It also includes security, military and political details on delineating areas of influence and maintaining border security, the paper reported.

It is not clear if the new arrangement in southern Syria will be part of the de-escalation zones that Russia, Turkey and Iran agreed to create at the Astana talks in May. US and Russian officials praised the deal, with US Secretary of State Rex Tillerson saying on July 10 that Washington was now prepared to work with Russia to establish no-fly zones in Syria in an effort to bring stability to the war-ravaged country.

Russian Foreign Minister Sergey Lavrov announced on the same day that Russia will continue cooperating with the United States on de-escalation zones in the south. He added that Moscow, Washington and Amman had agreed to set up a center for monitoring the situation in the south to be based in the Jordanian capital.

Political analyst Oraib al-Rantawi told Al-Monitor that the trilateral deal is separate from the Astana agreement and that this is vital to both Jordan and Israel. “Neither country wants Iran and Turkey to be involved in any capacity in the latest arrangement,” he said.

In Rantawi's view, the main issues at hand include disengagement between extremist groups and the moderate opposition — there are at least 50 rebel factions in the Southern Front — so regime and opposition firepower can be directed at the likes of Jabhat al-Nusra and the Khalid Ibn al-Walid Army and facilitating the regime's takeover of the Nasib border crossing with Jordan.

In addition, Rantawi thinks the pacification of Daraa will encourage Syrian refugees in Jordan to return. “This will entail massive humanitarian aid to be delivered to this area and the completion of reconciliation deals between the regime and local tribes,” he added.

While the Damascus government has not commented on the trilateral deal, Jordan believes Russia’s commitment and its readiness to dispatch military observers to the area will ensure the regime’s compliance. The Syrian military had announced on July 3 that it was halting military operations in the south for a few days, but relaunched attacks two days later. The position of rebel groups in the south toward the cease-fire remains uneven, with some rejecting it outright, others expressing reservations but at the same time readiness to observe it.

Political commentator Fahd al-Khitan told Al-Monitor that the cease-fire deal benefits not only Jordan, but the regime as well. “Our national security interests have been met without sending a single soldier across the border,” he said. “Moreover, it ensures Syria’s territorial integrity, allows the regime to take over the border crossing, paves the way for the repatriation of refugees and stops further bloodshed.”

In Khitan’s view, Jordanian diplomacy has made a breakthrough in the “intractable” Syrian crisis. “We could say that Amman has provided the platform to bring the US and Russia together on Syria away from the limelight. Without US-Russian cooperation, the Syrian conflict will never be resolved,” he said.

A new round of indirect talks began July 10 between Syrian government representatives and opposition leaders. UN special envoy Staffan de Mistura said at the talks that a US-Russian-brokered cease-fire in Syria's southern regions would contribute positively to talks between the government and opposition, adding, however, that he was not expecting any breakthroughs but rather “some incremental developments."

Retired Gen. Fayez al-Duwairi warned that the deal remains threatened because of Iran’s possible reaction and its considerable influence in Syria. “The biggest gain for Jordan, Israel and the US was in convincing Russia to keep Iran and its militias away from this vital region,” Duwairi told Al-Monitor. “Now it’s up to Jordan and the US to control the opposition groups in the south, while Russia has the responsibility of reining in the regime and Iran.”