The expansion of radical Islamist factions in southern Syria has raised concerns from Jordan that these groups would pledge allegiance to the Islamic State and seek to establish an emirate on its northern borders. 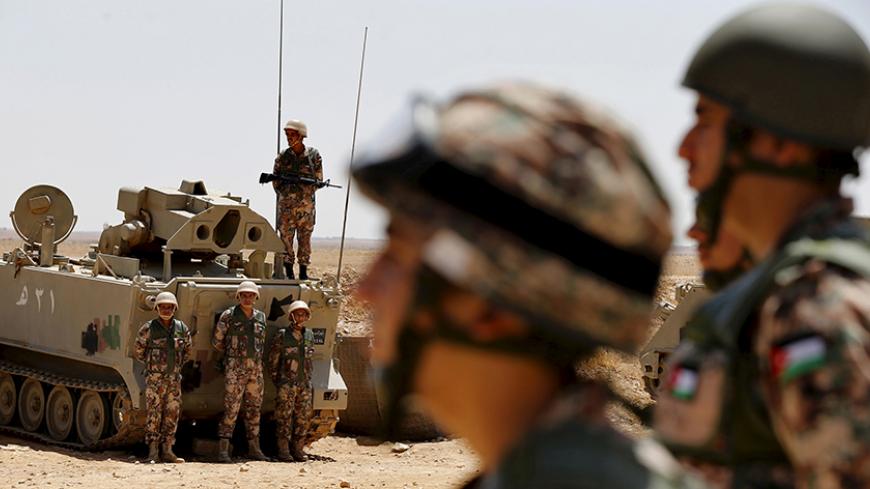 The Khalid Ibn al-Walid Army, which pledged allegiance to the Islamic State (IS) in June 2016, took over villages in the Syrian south Feb. 16 after breaking free from the siege that opposition Syrian factions had imposed on it for years in the Yarmouk Basin in Daraa’s countryside. This occurred a few kilometers from bordering Jordanian villages, and there has since been increased activity at the northern Jordanian border.

On Feb. 16, the Khalid Ibn al-Walid Army widely deployed its troops and took advantage of the Syrian factions’ preoccupation with the ongoing battles since Feb. 12 — otherwise known as “Death Rather than Humiliation” — between the Syrian regime and Hayyat Tahrir al-Sham (Liberation of the Levant Committee) in the south.

Hassan Abu Bakr, the spokesman for the Army of the Revolution in the Southern Front, said that the Khalid Ibn al-Walid Army tightened its grip on dozens of Syrian villages, namely al-Shajara, Jamla, Abidin, Qusayr, Nafaa, Ain Thakar, Tasil, Adwan, Jillen and Sahm.

Abu Bakr told Al-Monitor, “Khalid Ibn al-Walid Army confiscated 130 mm cannons with a maximum firing range of 27 kilometers [17 miles] and a limited amount of ammunition from the opposition. It also took possession of T-55 tanks and 122 mm field guns as well as medium and light weapons, thus threatening large cities in northern Jordan such as Ar-Ramtha and Irbid [Jordan's second-largest city], where around 1 million people live.”

Issam al-Rayess, the spokesman for the Southern Front, told Al-Monitor, “Khalid Ibn al-Walid Army used sleeping cells in the villages under the Free Syrian Army’s [FSA] control and took advantage of the FSA’s preoccupation with battles with the regime forces, which explains its advance and increased deployment.”

He added, “Battles are ongoing to regain control of these villages.”

Since 2012, the Jordanian authorities have managed to keep the Daraa base IS-free, in cooperation with factions that enjoy the support of the Military Operations Center (MOC). But this base was destabilized after IS expanded in December to the eastern borders adjacent to the Syrian Desert, and after radical groups in Daraa and Yarmouk — mainly the Islamic Muthanna movement, the Yarmouk Martyrs Brigade and Jaish al-Mujahideen, which gathered in 2016 under the umbrella of the Khalid Ibn al-Walid Army — pledged loyalty to IS.

The expanding deployment of these factions has sparked the concerns of Jordanian analysts and experts who fear the establishment of a radical emirate on the northern borders, luring radical organizations that have lost ground in Syria and Iraq. Political analyst Amer al-Sabayla called for “eradicating extremist groups in southern Syria before they get enrooted and turn into an emirate.”

Sabayla told Al-Monitor, “The radical groups close to the Jordanian border constitute a huge threat and might wage unconventional attacks by launching missiles on Jordanian cities and planning for qualitative operations such as the Rukban operation,” which killed seven Jordanian soldiers and wounded 14 others in June 2016 after IS detonated a car bomb against a military checkpoint at the Jordanian border.

The Jordanian authorities agree that radical groups in southern Syria constitute a danger for Jordanian national security. Jordanian Chief of Staff Lt. Gen. Mahmoud Freihat told the BBC on Dec. 30, “The Khalid Ibn al-Walid Army, which has pledged allegiance to IS, is only 1 kilometer [0.6 miles] from the Jordanian border and can target the army’s front lines.”

A Jordanian government source told Al-Monitor that the country would defend itself. “Anyone who comes close to the border will die. We have the best border protection systems in the world,” the source said.

Sabayla said, “Jordan has a realistic and practical choice to ensure the protection of its borders. It can coordinate with a real partner on the Syrian territories — hence Russia or the Syrian regime — especially since the international coalition does not have a vision for the post-airstrikes phase.”

In a step showing Jordan’s inclination toward Russia in terms of the Syrian situation, Jordanian King Abdullah II visited Moscow in January to discuss Syria and the war on terrorism.

Hassan Abu Haniyeh, an independent Jordanian researcher on Islamic groups’ affairs, told Al-Monitor, “The problem is that the international strategy — specifically that of the United States — in dealing with the Syrian situation has gone downhill. Western support for moderate factions in southern Syria that relied on armament by the West has declined. The Jordanian supervision of the Syrian opposition in south Syria through the MOC is weak now.”

Haniyeh said the declining support “pushed the moderate factions to join the ranks of al-Qaeda, represented by Hayyat Tahrir al-Sham or the Khalid Ibn al-Walid Army.” In addition, he expects “the moderate opposition factions in southern Syria to grow weaker in the medium-term.”

In regard to military operations, retired Maj. Gen. Fayez al-Duwairi told Al-Monitor, “The expansion of the Khalid Ibn al-Walid Army in Syria was not along the Jordanian border as much as it was in the Syrian interior. The demarcation line between this army and Jordan thus stretched from the Yarmouk Basin area toward the northern towns.”

He said, “This expansion is dangerous for Jordan due to the increasing influence of the Khalid Ibn al-Walid Army and its far-reaching fire strength into Jordan due to machine guns, mortars and cannons.”

Haniyeh expects “any clash between Jordan and this army to trigger a reaction from the kingdom by using fire and air weapons.” He ruled out the use of ground troops and the entry of Jordanian forces into Syria.

FSA sources in the south told Al-Monitor that the Khalid Ibn al-Walid Army consists of around 1,500 fighters, 300 of whom are so-called Sharia qadis (judges). Abu Muhammad al-Maqdisi, a Jordanian, spearheads the army, which mobilizes people in villages under its control by offering financial remuneration and giving them religious jihad training.

There are 120 factions under the FSA in the south, and they receive funding from the US-funded MOC. Those factions include the Syrian Revolutionaries Front, Ahrar Nawa Division, Liwa Tawhid al-Janoub, Harakat Fajr al-Sham, 46th Division, Alwiya al-Furqan, the military council in Quneitra and the Army of Free Tribes.