In an interview with Al-Monitor, the spokesman for the Southern Front, Maj. Issam al-Rayes, talks about the recent cease-fire brokered by the United States, Russia and Jordan in southern Syria, the regime’s violations and the boycott of the Astana talks. 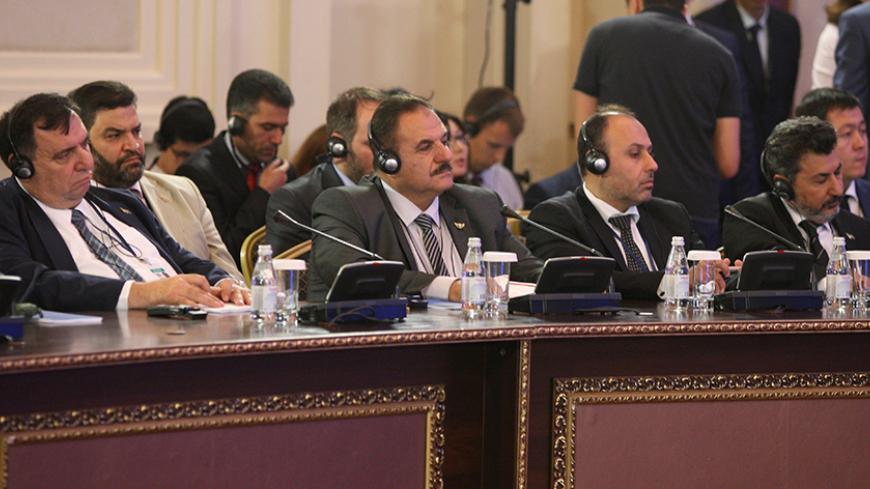 AMMAN, Jordan— The seventh round of talks between the Syrian regime and the opposition took off in Geneva July 10, as calm prevailed over the battlefronts in southwest Syria. On July 8, a tripartite agreement was reached between the United States, Russia and Jordan in Amman for a cease-fire in Daraa and Quneitra, effective as of July 9.

The two disputing parties — the regime and opposition — discussed the agenda of the previous round, which included four themes: the constitution, political system, elections and counterterrorism. It seems the negotiations are not looking up. Naser al-Hariri, the head of the Syrian opposition delegation to Geneva, said during the conference at the United Nations headquarters in Geneva July 12 that the regime is still refusing the political process. He called on the UN to commit to implementing international resolutions related to the political transition in Syria. Talks are scheduled to conclude July 14.

Sources from the Southern Front expressed their concerns to Al-Monitor that the Syrian regime might not commit long to the cease-fire. But the sources also said the front supports a peace process that complies with international principles and with UN Security Council resolutions 2254 and 2118.

The resolutions state that peace talks in Syria would resume early January 2016 and that the Syrian people are the ones who decide their future. These resolutions also called for forming an interim government and holding elections with UN sponsorship, and demanded an end of attacks on civilians immediately, removing chemical weapons and banning the innovation, production, storage and usage of chemical weapons and destroying them.

Despite participating in the Geneva-7 talks, the Southern Front, which includes 49 factions, announced July 4 its boycott for the fifth round of Astana talks that took place July 5 under Russian-Turkish-Iranian auspices to discuss the security track.

Russia, Turkey and Iran failed during the Astana talks to agree on certain issues like the borders of four de-escalation zones in Syria, senior Russian negotiator Alexander Lavrentyev said during a press conference July 5. The Russian, Turkish and Iranian delegations decided to form a group to demarcate the borders of de-escalation zones in Syria and indicated in a statement that the upcoming sixth round of Astana talks would take place at the end of August.

Al-Monitor conducted a phone interview with the spokesman for the Southern Front, Maj. Issam al-Rayes, who is also a member of the military delegation negotiating in the Astana and Geneva-7 talks. Rayes said, “The Southern Front has not yet received an official invitation to attend the sixth round of Astana talks.” He kept mum about “the themes discussed in Geneva-7 and the opposition’s vision,” awaiting an official statement to be released after the negotiations conclude.

Al-Monitor:  Is there a commitment from the regime and the Southern Front to the tripartite agreement for a cease-fire in the southwest of Syria?

Rayes:  The agreement has so far stood its ground, but there is a state of precarious calm, with some reported violations and machine-gun shots in Daraa on the second day of the cease-fire on July 11. Our office is documenting the violations and we are watching the truce closely. We will issue a report soon about the situation.

Al-Monitor:  What prompted the Southern Front to boycott the Astana talks?

Rayes:  The Southern Front boycotted the fifth round of Astana talks due to a lack of commitment from the regime forces. Explosive barrels were falling on Daraa before and during the talks. That's why the boycott decision was on point. The participating countries admitted that the talks did not make any progress and did not curb the escalation. [Bashar] al-Assad’s regime continued to target eastern Ghouta and Daraa and dropped more than 66 explosive barrels on the first day, leaving behind civilian casualties.

Al-Monitor:  How will the factions’ boycott for the Astana talks affect the southern area on the military level? Aren’t you afraid of pressure to halt support for you?

Rayes:  It is not true that we are being pressured and threatened with halting support. This is no longer significant because the fighting and resilience internally do not depend on support. We waged many battles without getting any support. The Southern Front factions never depended on support, but we take advice from some friends because they share the Syrian pain. We also trust the decisions of some countries that are close to the Syrian people, but this does not mean that we are under the mercy of the decisions of certain states. We take decisions locally and we do not fear any halt of support.

Al-Monitor:  Russian Minister of Foreign Affairs Sergey Lavrov said in June that de-escalation zones have reduced violence in many areas. How can you explain this statement?

Rayes:  This is not true. When a cease-fire was being drafted in Astana, Daraa was witnessing an unprecedented attack and ground raid from the regime forces, the Russian forces and the Shiite militias. Violence has not dropped in the Syrian Desert, which is still suffering from raids.

Al-Monitor:  Washington revealed in June the Syrian regime’s intention to use chemical weapons, and opposition factions said that rebel areas in Daraa were likely to be targeted. How are you benefitting from the international pressure on the regime?

Rayes:  The US administration exposed the regime’s intention to use chemical weapons in southern Syria, and the regime was threatened with a heavy blow. This is an early warning to save Assad once again, and it seems the use of chemical weapons is a red line for the West — not the killing of innocent people with all sorts of other weapons. The international community is almost legitimizing killing with any weapons except for chemical ones.

Rayes:  We did not lose Daraa, and the regime’s attempts to advance there have failed. We advanced to al-Manshiya neighborhood in Daraa by 95% in April. The regime could not make any progress on the ground. The field situation is in favor of the Syrian opposition.

Al-Monitor:  What are the latest developments on the progress of the battles with Khalid ibn al-Walid Army?