Jaish Usud al-Sharqiya, an internationally backed armed opposition group active in southern Syria, has made significant gains recently against the Islamic State in the south, but they eventually want to return to Deir ez-Zor. 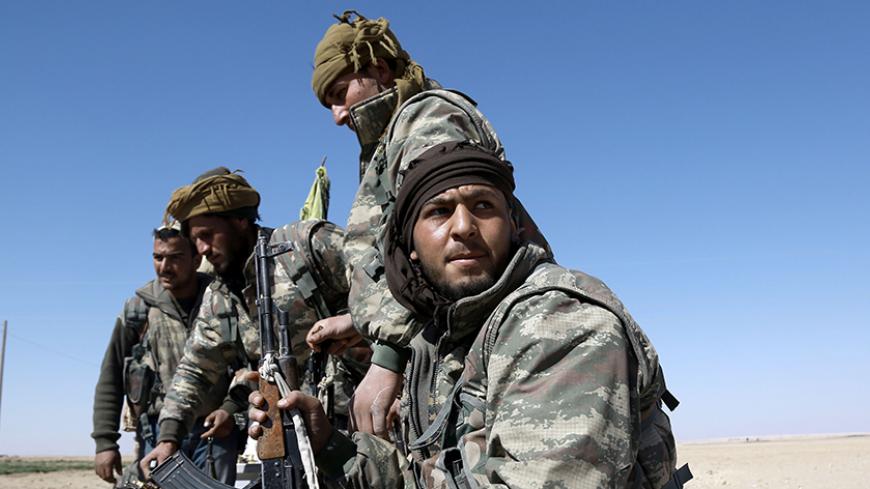 US-backed Syrian Democratic Forces, made up of an alliance of Arab and Kurdish fighters, advance in the village of Sabah al-Khayr on the northern outskirts of Deir ez-Zor, Syria, Feb. 21, 2017. - DELIL SOULEIMAN/AFP/Getty Images

ISTANBUL — An armed opposition group receiving international support has made significant gains in Syria recently against the Islamic State (IS) in the southern desert area and close to the capital.

The core of the group — called Jaish Usud al-Sharqiya (Lions of the East Army) — is from Syria’s easternmost province, Deir ez-Zor. Its leader, Tlass al-Salama, told Al-Monitor that the group's main aim is to return to the area, which will almost certainly be IS’ last stronghold in the country.

In the early morning of April 9, the al-Tanf base on the border of Jordan and Iraq, which is used by the group as well as US and British forces, suffered a major IS attack; the attack followed US strikes on a Syrian air base in Idlib.

“Coalition and partnered forces defended against the [IS] attack with direct fire before destroying enemy assault vehicles and the remaining fighters with multiple coalition air strikes,” a coalition statement reported. “VSO (Vetted Syrian Opposition) forces focus on conducting operations to clear [IS] from the Hamad Desert and have been instrumental in countering the [IS] threat in southern Syria.”

Salama, who is also known by nom de guerre Abu Faisal, told Al-Monitor in an interview earlier this month in Istanbul that hundreds of kilometers had been retaken from IS in recent months, both desert terrain scattered with villages and areas close to the capital.

The desert reaching from near the capital to the Euphrates River basin and the eastern Qalamoun Mountains near Damascus — the two areas where the group is fighting IS — have long been cut off from each other with only brief interludes of being linked contingently.

Salama said that large bribes had been paid to get men and supplies through regime-held territory and into the besieged area of Eastern Qalamoun, part of which is cut off by IS territory and the other part by regime-held forces, until recently when the balance of power tipped in favor of the opposition groups instead of IS.

He noted that a fee of $10,000 was charged for a single lorry and about $600 per person to be let through regime checkpoints, but that nothing had been allowed in for the past five months.

Nevertheless, significant tracts of land have been retaken from IS inside the besieged area in recent months, and Salama said that they expected to break the siege in the near future — unless the regime were to prevent this in some way.

Jaish Usud al-Sharqiya has avoided clashes with the regime recently and focused instead on IS. However, the group is still seen as a threat given its proximity to military air bases and other strategic locations near the capital.

“We are only 22 kilometers [roughly 14 miles] from the Dumayr air base,” Salama said, adding that "the rules of the game may change” if they were to get closer to besieged, opposition-held Ghouta that lies to the east of Damascus.

In a meeting with Al-Monitor in September 2016, Salama had said that he had around 450 men under him. In our latest meeting, he said that this number had climbed to around 1,300 by early April. The group was initially made up entirely of men from Deir ez-Zor province, before many young men from the areas that Jaish Usud al-Sharqiya liberated joined the group.

"They are grateful,” he noted, “and watch how we work.”

Salama, who had been working in the building trade in the town of al-Asharah in Deir ez-Zor province before 2011, said the name for his first group of fighters was intentionally nonreligious: Bashair al-Nasser, which roughly means Victory of Good News. After most of the group moved to the eastern Qalamoun area in mid-2014, the name was changed to Jaish Usud al-Sharqiya to retain its geographical link with the eastern part of the country.

He stressed that several affiliated groups working against the regime between 2011 and early 2014 had names that appeared religious in nature, but were actually in reference to their places of origin or dictated by financial supporters.

In regard to the now-defunct Kata'ib Allahu Akbar, for instance, Salama said that the group’s home city of al-Bukamal on the Iraqi border “has been known since the time of Saddam Hussein as Allahu Akbar City, given its strong support” for the former Iraqi president.

Between 2011 and 2013, his group was instrumental in smuggling out officers and soldiers who wanted to defect from the regime forces. They were housed temporarily in Deir ez-Zor in former technical school facilities until arrangements could be made to get them to their home areas.

After Mosul was taken by IS in June 2014, the extremist group brought weapons and men toward Deir ez-Zor, and many of the armed opposition fighters from the region were forced to head to either Daraa in the south or to eastern Qalamoun.

Jaish Usud al-Sharqiya has been working in the area ever since, alongside several other local rebel groups.

Salama said he had managed to “rehabilitate” many of those who had been working with IS but who surrendered in the villages of areas retaken since late 2016. According to him, dozens are now fighting alongside them.

“They are simple people and many had no choice” but to work with IS. He said that several individuals had worked at a water treatment plant and surrendered when the opposition fighters entered the town.

When Jaish Usud al-Sharqiya first started fighting in the eastern Qalamoun area, he said, “No one was against IS. We spoke to them and our Muslim cleric also explained to them the ways in which IS is not Islamic.”

In regard to the race toward the east, Salama said, “It is not crucial that Deir ez-Zor is liberated quickly. Desert warfare differs from other types [of warfare]. In a city, you might need 20 men for an area, while 200 are needed for the same [area] in a desert, since in the city you have buildings and so on. And logistics is a problem — transporting food, injured soldiers, etc.”

Salama's men now get a salary of $150 per month from the Military Operations Center in Jordan, which also provides training.

While Al-Monitor was talking to Salama, the news broke that 33 men from his native area had been slaughtered “with sharp tools.”

Meanwhile, IS seems to be in the process of moving its “capital” from Raqqa — ahead of a major operation by coalition and rebel forces to retake the city in northern Syria — to al-Mayadeen, the second-largest city in Deir ez-Zor province.

Fighters from the region itself, such as those in Jaish Usud al-Sharqiya, with their experience and informants among the local community, will almost certainly prove key to any sustainable victory against IS there.