The geopolitics behind race for eastern Syria

Fast-paced developments between the various players of the Syrian war raise questions about the geopolitical importance of the northeastern region. 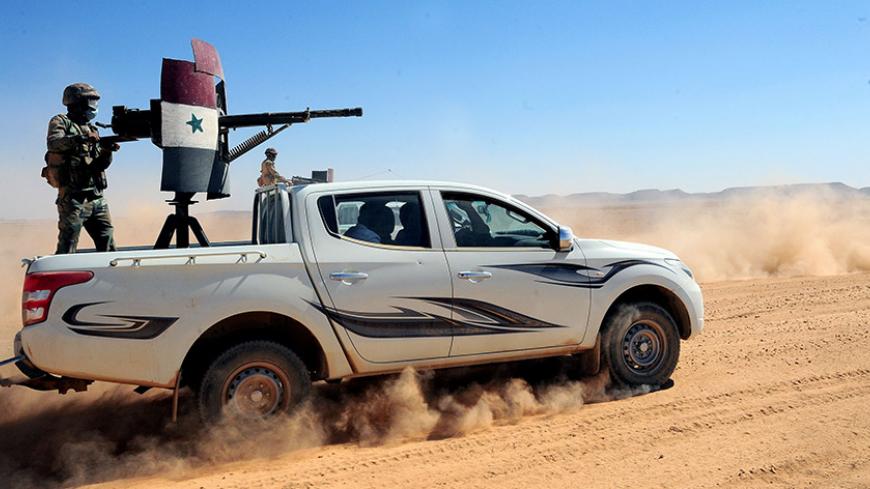 Forces loyal to Syria's President Bashar al-Assad ride on pickup trucks mounted with weapons in the Badia, in the southeast Syrian desert, June 13, 2017. - SANA/Handout via REUTERS

With the war on the Islamic State (IS) in full swing, the race for eastern Syria is on, with regional and international players jockeying for position in the desert areas stretching from north to south, in the direction of the Iraqi borders. Forces backed regionally and internationally are fighting for the precious span of desert. What are the geopolitical calculations of the various factions in that region?

The Syrian government has been progressing in recent weeks in three regions in central and eastern Syria, east of Aleppo toward the Raqqa axis, in the Deir ez-Zor region and al-Tanf, close to where the borders of Jordan, Iraq and Syria meet. At the same time, US-backed and Kurdish-led Syrian Democratic Forces (SDF) are gaining territory in IS’ Raqqa stronghold, while US coalition forces have clashed with pro-regime militias in the area of al-Tanf. Iran has also been pushing on the other side of the border, in the sector of Baaj in western Iraq.

Fabrice Balanche, a Syria expert at the Washington Institute, told Al-Monitor, “The geopolitical importance of eastern Syria is twofold; two-thirds of Syrian oil is located in the area, which is also rich in gas resources. The region is also a pathway for Iran to Syria via Iraq, through the Sinjar-Tal Afar-Hasakah axis in the north and through the Palmyra axis in the south.” Balanche said economic calculations for the Syrian regime, besides the oil and gas, include reopening important trade routes such as the highway linking Baghdad to Damascus.

Two players have been eyeing the northeastern area of Syria around the strategic city of Raqqa. In the wake of the United States' targeting of a regime plane, the SDF clashed for the first time with Syrian army troops north of Raqqa. Also, on June 13 the SDF reported major progress around Raqqa city, recapturing several areas such as the 17th Division Army Base and the sugar factory.

The Syrian army’s elite Tiger Forces also launched a massive assault in the western countryside of Raqqa, taking over several villages along with the Rusafa crossroads.

Balanche said that in the northeast, “The Syrian regime feels it can eventually exert enough pressure on the Kurds and make a power-sharing deal with them. They have already forced the Kurds to abandon al-Thawra dam.”

Backed by Russian airstrikes, the Syrian regime is also making a push in Palmyra’s southeastern countryside, targeting the Bir al-Badiya area near the T-3 Pumping Station. “Russia’s priority is to safeguard Syrian territoriality, which explains its backing of regime forces in eastern Syria,” Balanche added.

The takeover of Palmyra will allow the regime to progress to the east in the area of Deir ez-Zor, another IS bastion. The operation appears to be in coordination with offensives by Iranian-backed Popular Mobilization Units (PMU) across the border near Sinjar as well as Baaj.

“The Baaj area has been seized by the Iraqi forces and Hashid Shaabi [PMU], and this area is on the borders with Syria,” Mustafa al-Yasiri, the assistant Syria portfolio official for the Iraqi Shiite militia group Saraya al-Jihad, said in an interview June 10 with researcher Aymenn Jawad Al-Tamimi.

For Yezid Sayigh, a Syria expert at the Carnegie Middle East Center, Iran is supporting the regime in eastern Syria in part by encouraging the PMUs to signal their readiness to join the fight for eastern Syria. “In reality, they will not exceed their current forms and levels of involvement nor risk confronting the US directly at a time when [Donald] Trump seeks excuses to reimpose or tighten sanctions on Iran,” Sayigh told Al-Monitor.

He said no faction has enough manpower to reach, take and then control population centers in Deir ez-Zor province. “Not the regime, and certainly not the US-backed opposition groups,” he added.

Another area of contention between various players has been the strategic region of al-Tanf, which has been witnessing a clear escalation between protagonists. US-led coalition forces are training local militias there. On June 8, the US military shot down in al-Tanf an unmanned aerial vehicle (UAV) that attacked coalition forces.

“The priority of the US is to block IS’ advance and the Iranian expansion from Iraq to Syria,” Balanche said. Tehran’s main objective in the region is to create a corridor connecting Tehran to Beirut.

Russia appears to be attempting a balancing act in regard to the growing regional rivalry. The Russian response to the May 18 airstrike was relatively muted, with deputy Foreign Minister Sergei Ryabkov underlining that the coalition had hit a militia and not a faction belonging to the Russian-backed army, Aron Lund, a Syria analyst, said May 30.

It remains unclear what the United States and Russia really seek to achieve in eastern Syria, Sayigh said. Russia wants a political solution for Syria, and so might not invest major resources in the east unless the regime shows more willingness to accept a diplomatic solution. The United States has no policy on Syria, but US military commanders have been given autonomy by the Trump administration to act as they deem necessary in the fight against IS, and so they seek to expand opposition operations in the east. But they, too, have a limit: They will not get directly involved in fighting for towns in Deir ez-Zor province, such as Bou Kamal and Mayadin, he added.

The chess game being played in eastern Syria among so many rival forces may formalize the de-escalation deal engineered by Russia, which aims at implementing a cessation of hostilities in certain areas such as part of Homs and Damascus, southern Syria and Idlib. Some experts such as Lund have argued that the plan reached in Astana on May 9 may raise the specter of Syria’s partition through the enforcement of a frozen conflict whereby various factions will remain in control of their territory — something that contributed to the fast-decaying process of Syria as a nation-state.