The Donald Trump administration’s new budget for the Pentagon leaves in place nearly 6,000 US troops in Iraq and Syria. 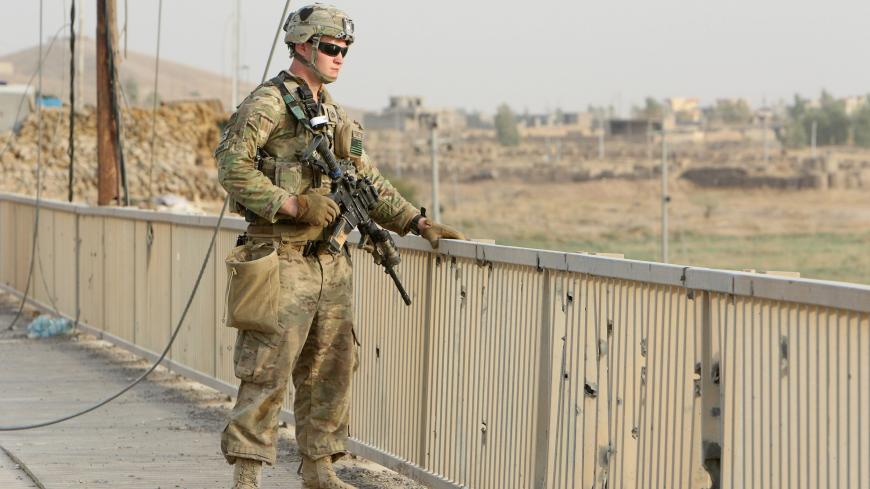 A US soldier stands on a bridge with his gun in the town of Gwer, northern Iraq, Aug. 31, 2016. - REUTERS/Azad Lashkari

The Pentagon released a budget blueprint today that calls for retaining some 6,000 US troops in Iraq and Syria, even as the Islamic State (IS) has been all but defeated in both countries.

The troop number is included in a $15.3 billion request to support the US-led anti-IS coalition in fiscal year 2019, which starts Oct. 1. It includes $1.4 billion to train and equip US allies, including $850 million for the Iraqi army and Kurdish peshmerga, $300 million for the Kurdish-led Syrian Democratic Forces (SDF) and $250 million for border security. The request is up more than $2 billion from the current fiscal year’s request.

Funding for US troops in Iraq and Syria has stayed flat for the past three fiscal years, even as the actual troop presence has fluctuated. The United States has an estimated 5,200 troops in Iraq, where they are engaged in training Iraqi forces, and 2,000 troops in Syria, mostly assisting operations to clear IS from the Middle Euphrates River Valley.

Despite the request to keep troop numbers stable, Pentagon spokesman Adrian Rankine-Galloway told Al-Monitor that the US troop levels in Iraq are on the “downturn” as artillery and other units depart.

Last week, the US military all but confirmed it is moving troops out of Iraq ahead of the country's legislative elections in May.

In November, more than 400 US Marines who helped liberate the former IS capital of Raqqa left Syria. Secretary of State Rex Tillerson, however, has said the United States would keep an enduring troop presence in the country to push back against the 125,000 Iranian troops believed to be in the country and protect areas held by the US-allied, Kurdish-led SDF in the country’s northeast. The United States has trained more than 11,000 members of the SDF since 2015.

“On the Iraq side of the border, [IS] has lost everything, pushing them into Syria,” US Defense Secretary James Mattis told reporters en route to Rome on Sunday. “As you do that, you’re compacting what’s left of [IS]. So the fighting actually becomes a little tougher at that point.”

The requested increase for the counter-IS fight comes as funding to train and equip Iraqi and Syrian forces is set to drop by more than 17%. Much of that cut is coming from Iraq as the US military shifts its focus toward securing borders in Jordan, Lebanon and other countries at risk from IS fighters leaving the battlefield.

With 127,000 Iraqi Security Forces trained since the United States returned to Iraq in 2014, the United States is seeking to cut funding for the training program from $1.3 billion to $850 million. That includes $45 million for the Office of Security Cooperation-Iraq, hosted at the US Embassy in Baghdad.

The budget also seeks $10.9 billion to replenish US troop supplies that have been used up in combat. That includes hellfire missiles, bomb upgrades and small-diameter bombs that the Pentagon says were used extensively to liberate Mosul last year.