Allegations that Shiite-majority militias allied with Iraq’s central government have used US military equipment against Kurds in the disputed Kirkuk province has sparked outrage among US lawmakers. 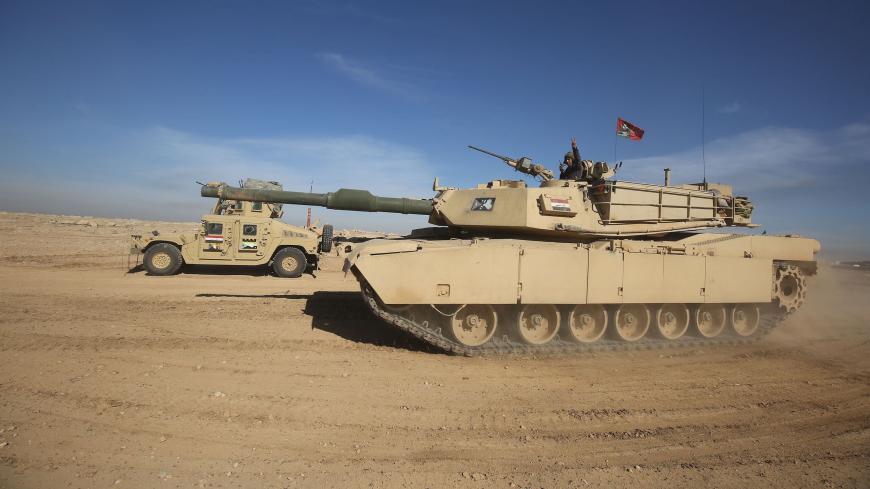 Iraqi forces, supported by the Popular Mobilization Units, advance near the village of Husseinyah, south of Mosul, during the offensive to retake the western side of Mosul, Iraq, Feb. 20, 2017. - GETTY/Ahmad al-Rubaye

Congress is threatening to stop sending weapons to Baghdad after reports today that Iraqi forces and Iran-backed Shiite militias are shooting at US-friendly Kurdish forces in northern Iraq.

Iraqi federal troops moved overnight to take control of Kirkuk and its surrounding oil fields following last month’s disputed independence referendum. Kurdish peshmerga fighters have accused the Shiite-dominated Popular Mobilization Units (PMU) of using US-supplied Abrams tanks and Humvees in the offensive, sparking outrage among US lawmakers who have long worried about US equipment ending up in Iranian-friendly hands.

“I am especially concerned by media reports that Iranian and Iranian-backed forces are part of the assault,” wrote McCain. “Make no mistake, there will be severe consequences if we continue to see American equipment misused in this way.”

Rep. Trent Franks, R-Ariz., who sits on the House Armed Services Committee and has introduced a resolution supporting Kurdish independence from Iraq, went further by suggesting that the United States should cut off financial support to Baghdad.

“I urge Iraqi Prime Minister [Haider] al-Abadi to fulfill his pledge to prevent any external or internal attack against the Kurds and prove Baghdad is not the puppet of Tehran,” Franks said in a statement. “Otherwise, the US will have no other choice but to pull funding as it cannot in good conscience send money to an Iranian patsy working to subvert American interests.”

“Every ounce of energy and resources the Iraqi government and the Kurdish peshmerga spend fighting each other should instead be spent fighting [the Islamic State] and terrorism in the region,” Schumer said in a statement. “This is especially true when those resources are those sent by the United States.”

The Kurds, who are well-aware of Washington’s distaste for Tehran, have highlighted the Iranian forces’ role in today’s offensive and claimed to have destroyed five Humvees involved in the attack.

“We were expecting them to attack us, but not using American weapons,” Brig. Gen. Hajar Ismail, a peshmerga commander, told Al-Monitor. “We have more than 200 peshmerga who were killed today in this fighting. … Also, they brought heavy weapons from Iran.”

The Pentagon, however, could not confirm that the peshmerga destroyed the US Humvees, and disputed that US military vehicles were used in an attack.

Although Rankine-Galloway reaffirmed the United States’ commitment to a “unified Iraq,” he also stressed that the United States is supporting neither Erbil nor Baghdad in the clashes and downplayed their severity.

“We are aware of reports of a limited exchange of fire during predawn hours of darkness Oct. 16,” said Rankine-Galloway. “We believe this to have been an isolated incident. We have not seen levels of violence suggested in some media reports.”

Baghdad has denied that the PMU possess any US-supplied M1 Abrams tanks and insisted that federal Iraqi forces retain control over the tanks. The Iraqi Embassy in Washington did not comment on the Humvees but asserted that “there is a concerted misinformation campaign by elements in the Kurdish region to cover up their sinister actions in attempting to disrupt the coordinated and professional movements of the Iraqi security forces.”

The debate over who’s to blame for the flare-up in violence — and whether US weapons and equipment were improperly used — could have important ramifications for Washington’s ability to continue to provide more than $1 billion in annual arms sales.

Current law requires the secretary of defense to certify that “the government of Iraq has taken such actions as may be reasonably necessary to safeguard against [US military] assistance being transferred to or acquired by violent extremist organizations,” including those with links to Iran. Although the United States vets the PMU militias it arms, the State Department has designated some militias within the PMU as foreign terrorist organizations.

House lawmakers tried to go further in last year’s annual defense bill by providing the peshmerga and Sunni tribal forces with $50 million unless Baghdad ended support for PMU militias controlled by or associated with Iran. The language, however, did not survive reconciliation with the Senate version of the bill at the time.