The Defense Department insists that its $300 million request to train and equip Syrian forces won’t be used to create a Kurdish-dominated “border guard” on Turkey’s doorstep. 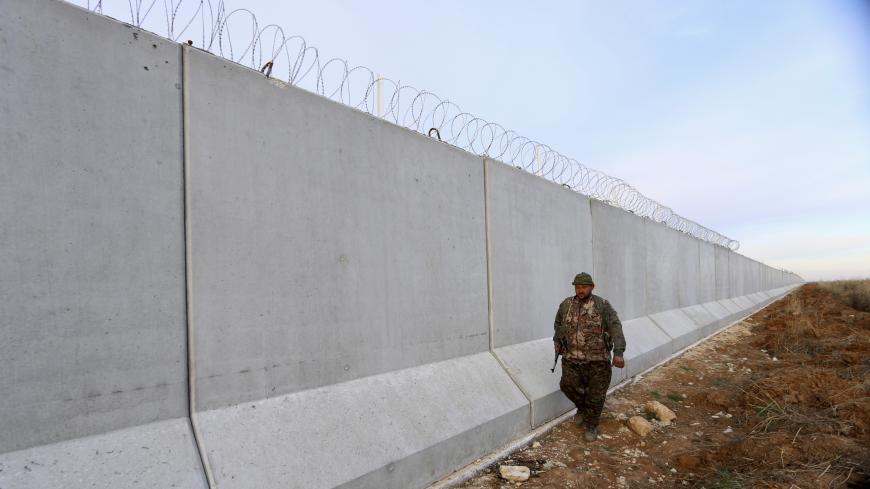 A Kurdish People's Protection Units fighter walks near a wall, which activists said was put up by Turkish authorities, on the Syria-Turkish border in the western countryside of Ras al-Ain, Syria, Jan. 29, 2016. - REUTERS/Rodi Said

The Pentagon is seeking hundreds of millions of dollars to train Syrian fighters near the Turkish frontier while tamping down Ankara’s fears of a Kurdish-led border force.

The fiscal year 2019 budget blueprint released Monday calls for $300 million to train and equip the Kurdish-dominated Syrian Democratic Forces and $250 million for “border security requirements” related to the mission to counter the Islamic State (IS). The Pentagon released a statement today suggesting that the border security funding was meant to support US partners in Syria, only to later clarify that the money is meant to support the governments of Lebanon and Jordan to combat the crippled Sunni insurgency along with “other violent extremists, illicit weapons, as well as narcotics smuggling.”

The miscommunication has set off recriminations in the Turkish media that President Donald Trump's administration is moving forward with previously leaked plans to create a 30,000-strong border force in northeastern Syria to help cement gains made by the United States' Kurdish allies. Last month, Turkish President Recep Tayyip Erdogan called the proposed force a “terror army” and threatened to strangle it “before it’s even born.”

Secretary of State Rex Tillerson has since walked back that proposal, and a Pentagon spokesman today flatly denied that the train-and-equip effort will pose a threat to Turkey. “This is not a new ‘army’ or conventional ‘border guard’ force,” Maj. Adrian Rankine-Galloway told Al-Monitor. “This training and these forces are consistent with campaign objectives to ensure an enduring defeat of [IS], facilitate stabilization efforts, and create the conditions that support the UN-led Geneva [peace] process.”

The Defense Department’s yet-to-be-released budget justification could provide more details about what will be supplied to Syria’s neighbors. In fiscal 2017, the Pentagon sent $180 million from the counter-IS account to help Jordan and Lebanon equip their border forces. Monday’s budget proposal also calls for $350 million in foreign military financing for Jordan and $50 million for Lebanon.

The Pentagon clarification comes as top US officials, including Tillerson, White House national security adviser H.R. McMaster and Defense Secretary James Mattis are set to meet with their Turkish counterparts this week in Ankara in an effort to ease tensions following the Turkish offensive against US-backed Syrian Kurds in Afrin. The Turks are furious at continued US support for the so-called People’s Protection Units (YPG), which Ankara considers a terrorist group, while Washington is eager to prevent the Turkish offensive from expanding further east toward Manbij, where many of the 2,000 US troops in country are located.

Turkish officials have said Trump agreed to stop sending US arms to the YPG in November, but US weapons assistance to the group has continued, according to the Pentagon’s inspector general. In the meantime, analysts say, Turkish officials may be leveraging their domestically popular Afrin operation to put pressure on the United States to rethink its pro-Kurdish policy; all the while, the operation is drumming up support for Erdogan, who could call a snap election as early as this summer.

“There is universal support for the Afrin intervention,” said Soner Cagaptay, Beyer Family fellow and director of the Turkish Research Program at The Washington Institute. “It points at a mutual lack of confidence from elites on both sides. I think the Afrin operations will force a serious debate inside US government about how to deal with the YPG relationship and not kick the can down the road.”

“We are keenly aware of the security concerns of Turkey, our [anti-IS] Coalition partner and NATO ally,” he said. “We will continue to be completely transparent with Turkey about our efforts in Syria to defeat [IS] and stand by our NATO ally in its counter-terrorism efforts.”