War rages in Turkish media in anticipation of military operation

News outlets loyal to the Turkish state and sympathetic to the Kurds are each busy framing the conflict ahead of possible Turkish military moves against Syrian Kurds. 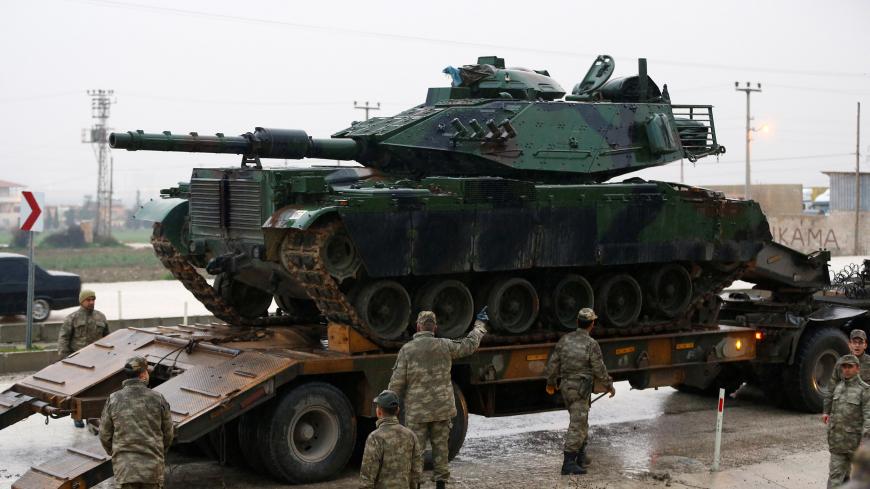 A Turkish military tank arrives at an army base in the border town of Reyhanli near the Turkish-Syrian border, Hatay province, Turkey, Jan. 17, 2018. - REUTERS/Osman Orsal

As speculation rages over the probability of a Turkish military incursion against Kurds in Syria, the propaganda war between the sides is already in full swing.

Turkey’s state-run Anadolu news agency turned to a pair of Syrian Kurdish fighters from the People's Protection Units (YPG), the US-backed militia that has been fighting the Islamic State (IS) in Syria, to press the case for Turkish intervention. The fighters, who are in Turkish custody, claimed in an interview that civil administrators affiliated with the YPG in Afrin, the Syrian Kurdish enclave Turkey is threatening to invade, had ordered digging equipment from the United States. The machines were purportedly going to be used to dig tunnels from Afrin to the Turkish side of the border, thus allowing YPG fighters to infiltrate Turkey, where they would go on to plan attacks.

The pair agreed that the YPG and the Kurdistan Workers Party (PKK), which is fighting for Kurdish self-rule inside Turkey, were the same. “The only thing that is different from the organization in Syria is their name,” one of them said. Anadolu reserved the biggest bombshell for last. “When the YPG/PKK or the [YPG-led Syrian Democratic Forces] … launched attacks on [IS] … they used to [provide] the United States [with] coordinates,” one of the captive fighters revealed. “After giving intelligence [on their] whereabouts, those places were hit by the US on short notice.”

Pro-government dailies joined in the chest-pounding with headlines ranging from “The final countdown” to “Afrin is target, PYD in panic.” A recurring theme is the United States being the YPG’s puppet master, all part of a broader campaign to destroy and dismember its NATO ally, Turkey. The US-led coalition’s comments over the weekend about its ongoing effort to set up a 30,000-strong force of YPG fighters to protect Syria’s borders with Iraq and Turkey against terrorist infiltration haven’t helped. In Turkey’s view, the YPG are the terrorists and the United States is mentoring them.

The mass circulation Sozcu claimed that the United States had provided the YPG with MANPADs and offered a photograph of a Kurdish fighter carrying one as proof.

The pro-Islamic Millet screamed in its banner headline, “Terror is rising from Incirlik.” It was referring to the Turkish air base in the southern province of Adana that is used by the US-led coalition in its campaign against IS both in Syria and in Iraq. The “sad truth,” it said, was that the “terror army” the United States is training was being supplied from Incirlik. “Shut it down,” Millet demanded.

The mildly oppositionist conservative Karar took a kinder view, asserting in its front-page headline, “USA approves Afrin offensive.” Karar was extrapolating from comments made to Anadolu by a Pentagon spokesman who underlined the well-established truth that the United States’ partnership with the YPG is confined to areas lying to the east of the Euphrates River and Iraq. Afrin is viewed as Russia’s sphere of influence. Maj. Adrian Rankine-Galloway wrote, “We don’t consider [the YPG in Afrin] part of our defeat [IS] operations, which is what we are doing there, and we do not support them.”

Pro-government columnist Abdulkadir Selvi noted that negotiations were underway with Russia for it to open Syrian airspace to Turkish war planes and that air support is critical to any operation against Afrin. Selvi claimed that the initial stage of the campaign would involve establishing a 6-kilometer (4-mile) deep security belt between Turkey and the enclave and that “probably with prodding from the United States,” YPG fighters had begun to withdraw to the city of Afrin proper where they were digging trenches in residential areas and preparing for urban warfare.

Ilham Ehmed, the co-chair of the Democratic Council of Syria and a member of the YPG’s political arm, the Democratic Unity Party, apparently believes that Russia may greenlight a Turkish incursion against Afrin. The quid pro quo, she explained in her weekly column for the pro-Kurdish Ozgurlukcu Demokrasi, was Turkish support against the al-Qaeda-linked Hayat Tahrir al-Sham, whose core members are the group known as Jabhat al-Nusra, in Idlib. “If Russia is calculating that it can help the [Syrian] regime win back control of Idlib it will be proven wrong. … Idlib is on Turkey’s border. … [Jabhat] al-Nusra is acting in concert with Turkey. Turkey is continuing to help them dig into Syrian soil,” she warned.

The pro-YPG Hawar News Agency carried a broad array of commentary on its website, lashing out at the “fascist Turkish state.” Syrian Arabs joined in the Turkey-bashing. Arab clan leader Sheikh Abadi Najam al-Fajr of the al-Bou Shaban clan told Hawar, “We, as tribal sheikhs, respond to them and say, ‘You have nothing but the badness of the soul. … [Turkish President Recep Tayyip Erdogan] is the source of terror.'”

Meanwhile, Firat, an online news portal openly sympathetic to the PKK, published footage of what it claimed was a PKK operation against the Turkish military in the province of Hakkari bordering Iraq. Firat reported that 10 Turkish soldiers had been killed in the assault. There has been no independent verification of those claims.​