Pentagon acknowledges higher number of US troops in Syria

The United States now officially has 2,000 troops in Syria, up from 500 previously, despite the Islamic State’s collapse. 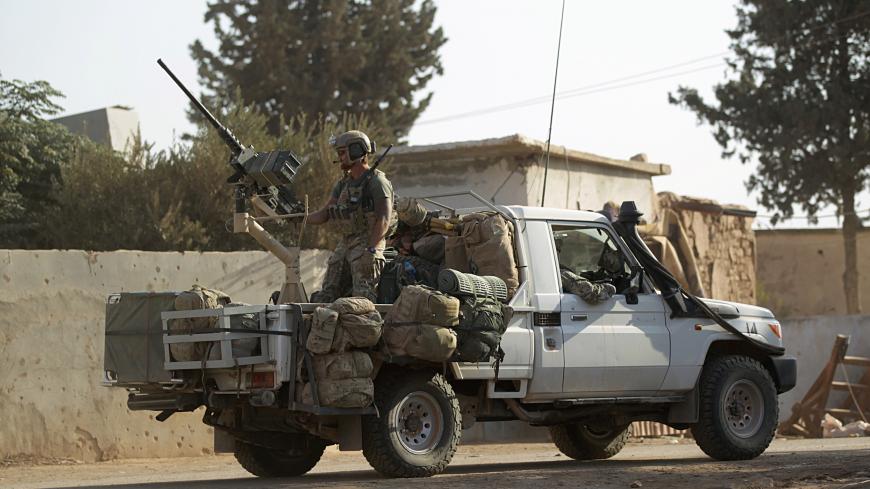 The Pentagon is publicly revealing that a larger number of US troops are stationed in Syria, after helping local fighters clear most Islamic State-held areas in the war-torn country.

As of today, the Pentagon says it has approximately 2,000 troops in Syria, up from the 500 figure it was touting as recently as last month. With the self-described Islamic State (IS) caliphate almost 97% gone, according to the Defense Department, those forces will now assist local groups, such as the Syrian Democratic Forces (SDF) and the Raqqa Internal Security Force (RISF), as they seek to stabilize the country.

Pentagon spokesman Col. Rob Manning also said that 5,200 US troops are serving in Iraq, consistent with the previous count.

Officials also said the Donald Trump administration’s mission in Syria, backed by a US-led coalition of 73 nations, will not be subject to pre-imposed timelines. The Pentagon first announced plans to revise the number on Aug. 31, when they unveiled a higher troop count in Afghanistan.

US officials are refusing to put precise timelines on the new phase of the anti-IS mission. Manning said the US presence in Syria is “conditions-based” to ensure that IS can’t reclaim lost ground or plot attacks in the West. He added that “there’s still a lot of work to do” in terms of demining and removing explosives from IS-held areas before many civilians can return to their homes.

Last week, the US-led coalition announced it would withdraw 400 US Marines from combat who led a monthslong artillery barrage against IS in Raqqa. Some 3,000 IS fighters remain distributed between Iraq and Syria, according to coalition estimates.

The Defense Department did not immediately clarify how those forces were accounted for or how US troops would be positioned throughout the country during the stabilization effort, which will proceed as the Trump administration backs UN-led talks to decide the political future of Syria.

The revision changes long-held procedures to account for troops at the Pentagon. Under force-management levels unveiled by the Barack Obama administration, the number of US troops in Syria had been capped at 503 and 5,262 in Iraq, figures that did not account for temporarily deployed personnel.

Figures released by Defense Manpower Data Center in November, which tracks counts of Pentagon military and civilian personnel deployed overseas each quarter, showed nearly 2,000 US troops in Syria and more than 9,000 in Iraq. It’s not clear if that release and subsequent reports by Al-Monitor and other news outlets prompted the long-planned revision.

The Obama-era policy — continued under President Trump until recently — aimed to draw down US troops in Afghanistan and create a limited presence to defeat IS in Iraq and Syria. Critics say the policy masked the true extent of US forces fighting IS and prevented the US military from using support troops, such as mechanics and equipment maintainers in-theater, creating greater reliance on contractors.

As troops enter a stabilization phase, US officials said there will not be clear front lines as American troops support efforts to remove mines and other explosives, return displaced people to their homes and support the growth of indigenous institutions in former IS-held territory that hasn’t been seized by President Bashar al-Assad — who has long called the US presence illegitimate — or Russian and Iranian forces backing the embattled Syrian leader.

But with Syrian negotiators walking out on the UN-backed Geneva talks this week, the Pentagon offered its heaviest criticism of Russian-led military efforts in recent memory.

“The Syrian regime and Russian federation’s actions have thus far demonstrated that countering [IS] and other violent extremist groups like [Jabhat Fatah al-Sham] and al-Qaeda is not their foremost priority,” Manning said. “Their collective actions call into question their commitment to dealing a lasting defeat to [IS] and other extremist groups.”

Manning added that Syria and Russia did not offer a plan “for how to bring about a meaningful conclusion to the civil war” by addressing the future presence of terrorist groups like IS and Iran-backed Shiite militias that have flowed into the country. Speaking in California this weekend, White House national security adviser H.R. McMaster said that as much as 80% of pro-Assad forces in Syria are proxy forces controlled by Iran. The United States maintains two hotlines to directly de-conflict military operations with Russia: one based in Kuwait to handle ground combat, and another to deal with air actions at al-Udeid air base in Qatar.

Yet it’s not clear exactly which Syrian partners the remaining American troops will be supporting to create “sustainable” and “ethnically diverse” local security forces.

By September, the US-backed coalition trained 8,500 SDF troops in Syria and provided vehicles and equipment to 40,000 troops in the Arab and Kurdish units. The Arab-dominated RISF that was stood up to stabilize Raqqa is 1,600 members strong and recently graduated 500 new members, coalition spokesman Col. Ryan Dillon said at an August briefing.

Though the RISF and SDF are still in place, US Defense Secretary James Mattis during a trip to the Middle East last week indicated that the Pentagon would draw down support for Kurdish-backed units that led the fight against IS. The move is in line with Trump’s promise to Turkish President Recep Tayyip Erdogan in a call made last month. The Pentagon hopes to recover heavy weaponry from the People's Protection Units (YPG), but the group may keep some small arms and light vehicles.

“The YPG is armed, and as the coalition stops offensive ops, then obviously you don't need that; you need security — you need police forces. That's local forces. That's people who make certain that [IS] doesn't come back,” Mattis said. “We're going to go exactly along the lines of what the president announced.”

US operations against IS in Iraq and Syria that began in October 2014 have cost American taxpayers nearly $16 billion, according to a Pentagon inspector general report unveiled last month. The Pentagon’s budget for the new fiscal year will provide $13 billion for the operation next year, including $1.8 billion to train and equip partner forces in Iraq and Syria.