US officials guiding the fight in Syria warned of a long struggle ahead to defeat the Islamic State. 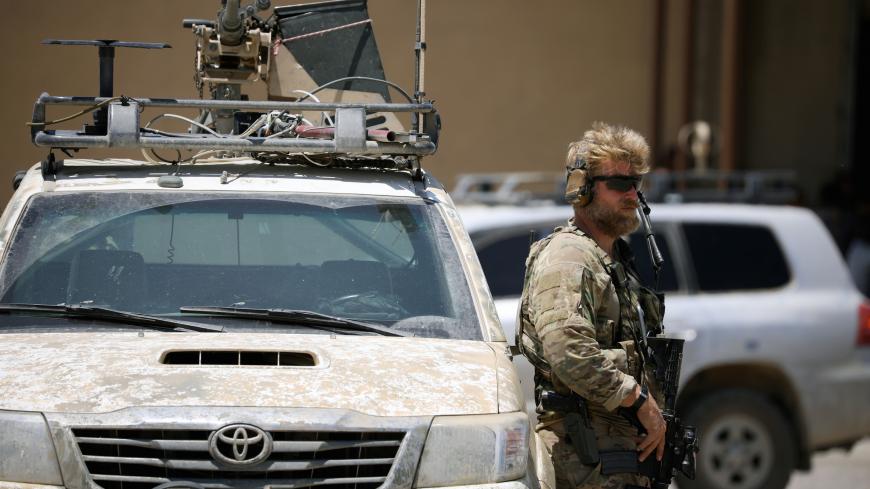 A US army soldier holds a gun as he stands guard next to an armored vehicle as Brett McGurk, US envoy to the coalition against the Islamic State, visits the town of Tabqa, Syria, June 29, 2017. - REUTERS/Rodi Said

US officials in charge of the fight against the Islamic State (IS) warned today that the American-led coalition’s hard-fought gains could yet be reversed as President Donald Trump considers pulling out 2,000 US troops from Syria.

“The hard part is in front of us,” US Central Command chief Gen. Joseph Votel said at a US Institute of Peace panel alongside top diplomatic and humanitarian officials. “Stabilizing these areas, consolidating our gains.”

Votel said the US mission to stabilize areas cleared of extremists was six to eight months ahead of schedule. US forces and their Syrian and Iraqi allies, he said, have been through “some very lengthy fights.”

The remarks come amid uncertainty about the Trump administration’s plans for the region as Syrian President Bashar al-Assad’s forces reclaimed the last rebel-held Damascus suburbs earlier this week. The National Security Council was set to discuss the US strategy in Syria today, CNN reported, while Trump’s latest public remarks cast doubt on a Pentagon proposal to send dozens more military advisers to aid US-backed Kurdish forces in northern Syria.

At a campaign rally in Ohio last week, the president promised to withdraw US troops “very, very soon.” And at a gathering of Baltic leaders at the White House today, he expressed his desire to “get out” of the war-torn country and called on Saudi Arabia to help pay for the US military presence in the country. During his visit to the White House last month, Saudi Crown Prince Mohammed bin Salman reportedly asked Trump to keep US troops in Syria.

US officials insist that the American effort in Syria won’t last indefinitely.

“What I saw in Raqqa wasn’t an open-ended commitment, but a clear mission,” US Agency for International Development administrator Mark Green said at the US Institute of Peace panel, reflecting on a recent trip to the region.

Brett McGurk, the US special envoy for the counter-IS fight at the State Department, said the administration is currently undertaking a spending review of the Syria campaign that extends from counter-explosive aid to rubble removal. He declined to address the president’s decision last week to freeze $200 million in US stabilization funds for opposition-held areas, which Secretary of State Rex Tillerson had promised at a pledging conference in Kuwait in February before getting the boot.

The Pentagon says the counter-IS coalition has dislodged the militant group from 98% of the land it once held in Iraq and Syria, a figure Trump has cited as a key accomplishment of his 14 months in office. Yet Votel and other US commanders also acknowledge that Turkey’s intervention in the Syria conflict in January to overrun the Kurdish enclave in Afrin has “slowed down” operations against IS.

McGurk said US support for Kurdish partners in Manbij, which Turkish President Recep Tayyip Erdogan has threatened to overrun, remains an irritant to Ankara. The American presence there, he said, was designed to stop IS cells from gathering to plan attacks on European cities.

Overall, the Trump administration’s budget for the upcoming fiscal year seeks $300 million more for the Pentagon’s fight in Syria. But experts say the commander in chief, who has said he opposed the 2003 Iraq War, remains worried about getting bogged down in another Middle East war.

“The hard rule in Syria is that he doesn’t want his Iraq War,” Nick Heras, a Middle East fellow at the Center for a New American Security, told Al-Monitor. “He doesn’t want an open-ended conflict that grabs media headlines.”

Talk of a prompt US withdrawal from Syria has unnerved American allies. Leaving the war-torn country “would send a frightening message” to leaders in Iraq, said Bayan Sami Abdul Rahman, the Kurdistan Regional Government’s US representative, at today’s US Institute of Peace panel. “Right now we’re hearing alarming things without an explanation.”