New heights of irresponsibility over the Golan

President Donald Trump and Prime Minister Benjamin Netanyahu do not care that recognizing Israeli sovereignty over the Golan Heights could destroy all chances for peace between Israel and the Arab world. 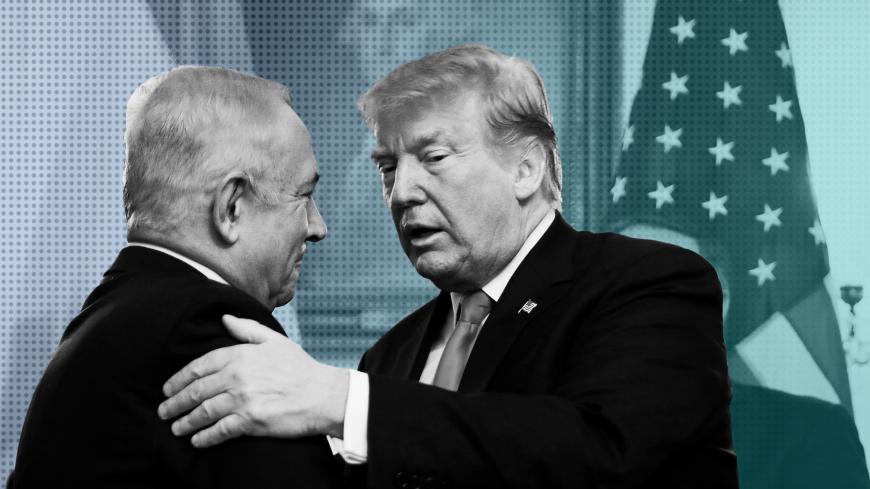 US President Donald Trump shakes hands with Israeli Prime Minister Benjamin Netanyahu during a ceremony to sign a proclamation recognizing Israel's sovereignty over the Golan Heights in the Diplomatic Reception Room at the White House, Washington, March 25, 2019. - REUTERS/Carlos Barria

Will Culture Minister Miri Regev exploit for campaign propaganda purposes the photos of the house struck in Mishmeret on March 25 by a Hamas rocket from Gaza? Will she, as she did on March 17 after a gun and knife attack on the West Bank left two Israelis dead, warn that this is what awaits Israel if the “leftist-Arab bloc” defeats her right-wing bloc in the April 9 elections?

In these crazy days, surely someone will claim that Hamas launched a long-range projectile at the Israeli heartland to steal Prime Minister Benjamin Netanyahu’s thunder as he attended President Donald Trump’s signing of the declaration recognizing Israeli sovereignty over the Golan Heights. A festive White House event like that can certainly sideline what have become routine attacks from Gaza on Israeli border communities. Photos of the injured Israeli family against the backdrop of the live broadcast from the White House signing ceremony, however, illustrate the strategic price that Israel has paid and will continue to pay for the alliance between the Israeli and American right.

US intervention in Israeli elections is not unusual, but this is the first shift in US policy on the territories that Israel has occupied since the 1967 Arab-Israeli War and on the UN resolutions condemning the occupation. In a 2011 paper by the Institute for National Security Studies, David A. Weinberg, a former staff member of the House Committee on Foreign Affairs, detailed instances of US presidential meddling in Israeli politics.

For example, a former senior National Security Council official recalled that President George H. W. Bush had wanted to get rid of Prime Minister Yitzhak Shamir in the early 1990s. President Bill Clinton organized a summit in Sharm al-Sheikh in 1996 for a photo-op to boost the electoral prospects of Shimon Peres against Netanyahu. In a 2018 interview with the Israeli journalist Raviv Drucker on Israel’s Channel 10, Clinton admitted that he had tried to help Peres. “I did try to be helpful to him because I thought he was more supportive of the peace process,” Clinton said. “And I tried to do it in a way that was consistent with what I believed to be in Israel’s interest.”

Trump, however, is the first American leader since 1967 whose intervention in Israeli politics undermines the peace process. The strategic repercussions of US recognition of Israeli sovereignty over the Golan Heights are more far-reaching than those of Trump’s decision last year to move the US Embassy to Jerusalem. Despite Trump’s decision to recognize Jerusalem as Israel’s capital, at the inauguration of the embassy building, the United States declared that the move did not signal recognition of Israel’s annexation of East Jerusalem in 1967. In fact, Trump declared at the time that Jerusalem’s permanent borders would be determined in negotiations with the Palestinians.

In July 2018 at a congressional hearing on whether the United States should recognize Israel’s annexation of the Golan, Daniel Kurtzer, former US ambassador to Israel, testified that the administration of President Ronald Reagan had firmly opposed Israel’s 1981 annexation of the Golan. In fact, even that Knesset law left the door open to an eventual deal with Syria that would necessarily have included discussion of the Golan’s future. The Princeton University professor, who also served as a member of US Middle East peace talk teams under Democratic and Republican administrations, noted that Prime Minister Yitzhak Rabin had conducted US-mediated peace negotiations with Syria based on Israel’s return to the June 4, 1967, border.

Kurtzer said four of Rabin’s five successors – Peres, Netanyahu, Ehud Barak and Ehud Olmert —had conducted clandestine or public talks with Syria based on that same policy. Even Prime Minister Ariel Sharon, according to Kurtzer, did not explicitly disavow the government’s accepted policy that left the issue of the Golan’s final status to negotiations between the two parties. The former ambassador added that although negotiations with Syria did not yield a comprehensive agreement, the two sides did bridge some gaps, including on issues related to the Golan.

“Today, Israel needs security from Syria and its erstwhile allies, not a peace process with Syria,” Kurtzer argued. “Should a moment arrive in the future when, under a different Syrian regime, the possibility of peace emerges, Israel will be in a position to take its decision regarding the ultimate status of the Golan Heights.” Kurtzer predicted that a US decision to raise the Israeli sovereignty issue would draw attention away from the crimes of Syrian President Bashar al-Assad's regime and its support by Iran and Russia.

Middle East scholar Matti Steinberg agrees with Kurtzer’s assessment. In a conversation with Al-Monitor, he said that US recognition of Israeli sovereignty over the Golan would lead Arab states to support Syria and at the same time push Assad deeper into the arms of Iran and Russia. Since the outbreak of the Syrian civil war and Syria’s expulsion from the Arab League, there has been an unspoken agreement between Israel and Arab League members regarding the status quo on the Golan as well as Israeli air raids on Syrian territory. The US move, Steinberg said, risks destroying the greatest diplomatic development for Israel in the past two decades – the 2002 Arab Peace Initiative, which offers Israel peace and normalization with all Arab states and member states of the Organization of Islamic Cooperation (OIC).

Yossi Beilin, a former minister, believes the US move drastically limits the door opened in 2002 by the Arab Peace Initiative for a final-status agreement between Israel and the Palestinians. Speaking in Paris on March 21, Beilin said that even if Israel and the Palestinians reach an agreement, the Arab initiative would not lead to a normalization of ties with the Arab and OIC countries. Instead, the American-Israeli move forces them to demand that Israel withdraw from the Golan Heights. Absent Israeli consent, normalization could not be forged.

Indeed, shortly after Trump's recognition of the Golan as Israeli territory, Saudi Arabia and Bahrain condemned the move. The Saudi statement asserted that “the Golan remains ‘occupied Syrian Arab land’” and emphasized that US recognition would negatively affect the Middle East peace process and the stability and security of the region. US recognition of Israel’s annexation will be put to its first test when the Arab League convenes for its annual summit at the end of March in Tunis.

March 26 marks the 40th anniversary of Israel’s peace treaty with Egypt, following which Israel withdrew from the Sinai Peninsula and dismantled its settlements in the northern Sinai. Such a treaty would have been highly unlikely on the watch of the duo of Trump and Netanyahu. All that remains for the victims of the rocket in Mishmeret and their fellow Israelis is to seek solace in the declarative and irresponsible move by these two populist leaders.