Why US recognition of Golan Heights annexation would hurt Israel

The US-backed campaign for recognizing Israel’s sovereignty over the Golan Heights could become a real obstacle on the way to peace with Syria. 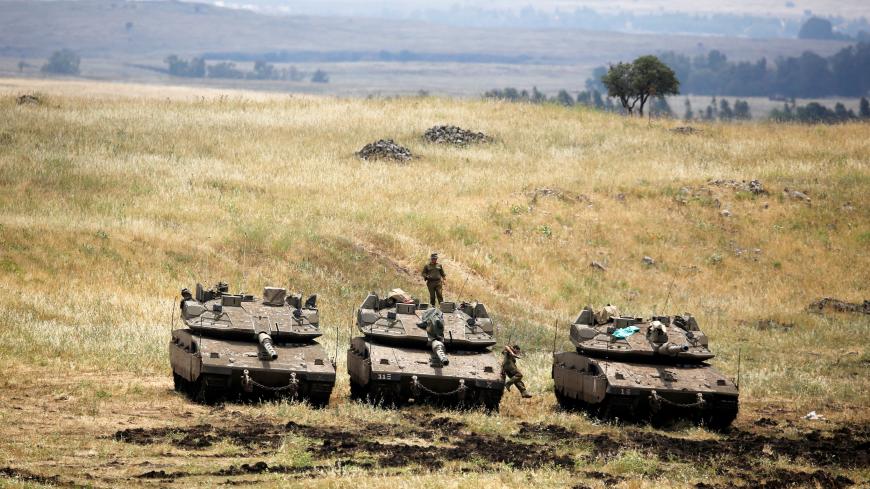 An Israeli soldier stands on a tank as another jumps off it near the Israeli side of the border with Syria in the Israeli-occupied Golan Heights, Israel, May 9, 2018. - REUTERS/Amir Cohen

Republican Sen. Ted Cruz recently spearheaded efforts in Congress to advance US recognition of Israeli sovereignty over the Golan Heights. Unlike the decision to move the US Embassy to Jerusalem — which was significant for Israel even if it came at a price — this is just a meaningless gesture that will be of no significance when Israel holds peace talks with the Syrians. On the other hand, the potential damage posed by such a move would be immediate. There would be boycotts, condemnation in the Arab world and a very discernible attempt by the West to prove that it rejects the US initiative. It would make more sense for Benjamin Netanyahu's government to attempt to achieve a more dramatic decision from the current administration, which is already very supportive of the Israeli right. This could be a defense treaty with Israel, for instance, instead of the misguided support that the United States is giving Israel now.

The Golan Heights returned to the headlines after the Syrian front heated up again, with Iranian forces firing rockets at Israel at the beginning of May. This is attributed to the presence of the Syrian army, Iran’s Islamic Revolutionary Guard Corps and various Iranian militias, along with the — very temporary apparently — presence of the US military and the ongoing involvement of Hezbollah in fighting in the region. Actually, the Golan Heights has been on the decision-makers’ table ever since Israel first seized the territory from Syria in the 1967 Six-Day War. As an Israeli who fought in the war over the Golan Heights, I feel an attachment to it, but nevertheless am ready to withdraw in order to enable full normalization of ties with the Arab world, based on the 2002 Arab Peace initiative.

The ministers who met on June 19, 1967, just one week after the Six-Day War, determined that Israel would attempt to reach an agreement with Syria on the basis of their pre-war boundary and Israel’s security needs. The decision of the Arab League, made in Khartoum, Sudan, on Sept. 1 of that year, and which became known as the “Three Nos” — No recognition of Israel; No negotiations with Israel; and No peace treaties with Israel — caused the Eshkol government to step back from its original intent. Nevertheless, when Israel negotiated with Egypt in 1978-79 and with Syria in the 1990s and early 2000s, Israel was prepared to reach a peace agreement with both nations based on the exact same principles.

Then, in 1975, with talks over the disengagement of forces with Egypt in the background, US President Gerald Ford sent a secret letter to Prime Minister Yitzhak Rabin, saying that when the United States decides on its position regarding the border between Israel and Syria, “it will give serious weight to the Israeli position that any peace agreement with Syria must be based on Israel remaining in the Golan Heights.”

Although this letter was later made public, it is quite obvious that it did not have the same importance as another commitment by Ford, that there would be no negotiations with the PLO as long as it refused to recognize Israel. Anything can be put down on paper, including this bizarre commitment to take the Israeli position at the time into serious consideration.

In December 1981, then-Prime Minister Menachem Begin attempted to take advantage of the window of opportunity between the signing of a peace agreement with Egypt in March of that year and the completion of its gradual implementation in stages, by passing a law imposing Israeli law over the Golan Heights. The law made it through the Knesset in record speed, but no nation recognized it. At the same time, Israel would not deny that the Golan Heights were previously under full Syrian sovereignty. Its official representatives said as much — in a Knesset debate over the proposed legislation no less — claiming that this legislation would not inhibit Israel from negotiating with Syria over the fate of the Golan Heights at some point in the future.

The Madrid Conference of October 1991 led to direct talks between the Syrians and the Israelis, but there was no real progress until Rabin, elected prime minister in June 1992, decided to give them new life. The Clinton administration made it clear to Rabin that it was aware of the difficulties to make historic compromises on both the Syrian and the Palestinian fronts. It also made clear that in view of these difficulties, and because of the geo-strategic implications of peace with Syria, the preferable channel for the Clinton administration is the Syrian one.

It looked like the Syrian channel was, in fact, progressing rapidly. At some point, Rabin made a promise to US Secretary of State Warren Christopher, who relayed this to Syria’s President Hafez Assad, that if Syria meets Israel’s security requirements, Israel would leave the Golan Heights. This promise was not made in any official government forum. Shimon Peres, who took over as prime minister after Rabin’s assassination in 1995, first heard about it from US President Bill Clinton, when he arrived in Israel to attend Rabin’s funeral. Peres promised to adopt Rabin’s commitment, but while talks with the Syrians were relaunched, they did not lead to any agreements.

Netanyahu also preferred the northern channel (Syria, instead of the Palestinians) and tried to reach an arrangement with the Syrians through his friend, American businessman Ronald Lauder. After several meetings with Assad in 1998, he presented him with an agreement in principle to withdraw from the Golan Heights, but this move was thwarted when Netanyahu told then-Foreign Minister Ariel Sharon about it. One year later, the new prime minister, Ehud Barak, attempted to reach an agreement with the Assad regime on the basis of Rabin’s promise. This time, it happened during direct talks between Clinton, Barak and Syrian Foreign Minister Farouk al-Sharaa, which took place in Shepherdstown, West Virginia, in January 1999. While the talks led to no results, further rounds were considered. However, these did not take place before Assad’s death in 2000. An attempt by former Prime Minister Ehud Olmert to reach an agreement with his son Bashar al-Assad through Turkey also led nowhere.

No piece of American legislation will stand in the way if some Israeli prime minister — from the right or the left — ever wants to reach a peace agreement with Syria and fulfill the 2002 Arab League’s initiative, which promised normalization with the entire Arab world on condition that Israel makes peace with the Palestinians and the Syrians. And if such negotiations do not happen, no piece of American legislation will legitimize Israel’s control over the Golan Heights among not only the Arab nations but the rest of the world too. It is just a meaningless gesture, which could result in unnecessary damage. It would, therefore, be better to recommend that the initiative is nipped in the bud.