Nasrallah seeks to capitalize on US shift on Golan

The Trump administration's recognition of Israeli sovereignty over the Golan Heights has given the advantage in Lebanon to Hezbollah, whose opposition to the move puts it in line with public opinion. 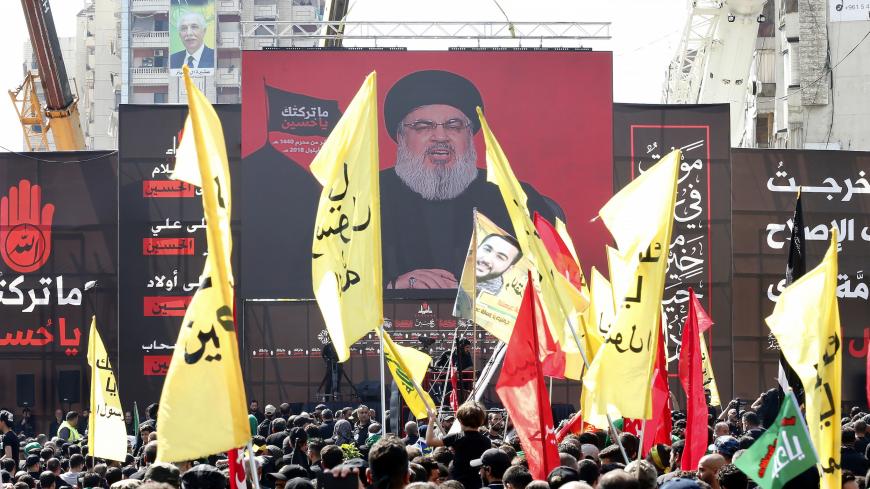 Supporters of Lebanon's Shiite movement Hezbollah gather near a giant poster of their leader Hassan Nasrallah during a ceremony to mark Ashoura, Sept. 20, 2018 in Beirut. - ANWAR AMRO/AFP/Getty Images

The Donald Trump administration’s recognition of Israeli sovereignty over the Golan Heights has given Hezbollah and the "resistance" camp an unexpected gift, delivering a setback to US Secretary of State Mike Pompeo’s goal of isolating Hezbollah within Lebanon during his visit to the country last week.

The US decision on the Golan was rejected by US allies throughout the region, including across the political spectrum in Lebanon.

Lebanese President Michel Aoun told Pompeo that Hezbollah is a Lebanese party with popular support. House Speaker Nabih Berri said that Hezbollah is a “Lebanese party represented at the parliament and the government. Its resistance and that of the Lebanese people are the result of the continued Israeli occupation of Lebanese territory." Even Prime Minister Saad Hariri, an all-time-rival of Hezbollah in Lebanese politics, didn’t react positively to Pompeo’s notion. He insisted that the country is facing a difficult economic situation and there’s a need to be in touch with political factions, including Hezbollah, to maintain the national peace, according to one of Hariri’s advisers, Ghatas Khouri, who commented briefly to Lebanese daily Annahar.

Foreign Minister Gebran Bassil sought to strike the right diplomatic balance in his remarks with Pompeo, saying that “Hezbollah is a political party," and its representatives are "elected by the Lebanese people." He continued, "As such, we do not want our relations with the USA to be impacted or influenced by this, and we want to work together in order to solve all these problems, including the issue of Hezbollah …"

In fact, Trump’s decision on the Golan played into the hands of Iran and Hezbollah, giving them a pretext to their continuous effort to build a solid presence in southern Syria, mainly on the borders with Israel.

Hezbollah’s chief Hassan Nasrallah described the US move in a March 26 speech as a crucial and decisive event in the Arab-Israeli struggle, noting that “condemnation statements are no longer enough.” He stressed that the only way to regain Syrian, Lebanese and Palestinian occupied lands from Israel is the resistance.

Nasrallah also pointed out that the real goal of Pompeo’s visit was to incite the Lebanese against each other. He said that Washington has its eye on a civil war in Lebanon, adding that Pompeo’s problem with Hezbollah is that it was among those who fought and overthrew the US project in Syria. Hezbollah, he said, stands as an obstacle to the United States' forthcoming peace plan, often referred to in the Arabic media as “the deal of the century.”

Nasrallah said the strong rhetoric Pompeo used against Hezbollah during his visit to Beirut was a source of pride for the party, which has long been labeled a “terrorist organization” by Washington.

“We are happy that Pompeo considers Hezbollah his problem. This does not frighten us, but rather makes us happy. We are happy that the Trump administration is angry with us. In our ideology, the US administration is the Great Satan,” Nasrallah said in a televised speech devoted mainly to responding to the US official’s visit. “When the Great Satan is pleased with us, this means there is a problem in our position. Pompeo’s remarks about Hezbollah enhanced our belief that we are in the right position.”

To Nasrallah, this is another way to say he was right to defy US policies in the region. The message here is not to allies of Washington as much as it is to the Arab street, which is once again receiving a message from the Trump administration that the United States is withdrawing from its role as a peace mediator and positioning itself on the opposite side of international resolutions.

This is the second message of its kind in less than two years from Washington, after the December 2017 decision to recognize Jerusalem as the capital of Israel. The latter was anticipated in the Arab world as a killer of the two-state solution, while the one on the Golan is a final declaration that the peace process leading to a two-state solution has come to an end.

Since Trump’s arrival in the White House in 2016, the term “deal of the century” has been one of the most debated issues in the Arab world. The decisions on Jerusalem and the Golan Heights have put US allies in the region in the hot seat, as Arab and Muslim citizens question the merits of their governments supporting a "peace plan" that opposes UN resolutions. The Arab capitals, which have objected to the US decisions on Jerusalem and the Golan, may now have to reconsider their stance on the forthcoming peace plan. By contrast, the position of Hezbollah, and its patron Iran, in steadfast opposition to all US initiatives, has the apparent advantage of being on the side public opinion.

The Golan announcement was also part of the discussions between Russia’s President Vladimir Putin and his Lebanese counterpart Aoun during their meeting in Moscow on March 26.

Putin welcomed Aoun as “our traditional longtime partner” in the region and “a representative of the Christian community.” Aoun thanked Putin for his “defense of Christian minorities in the Levant,” while lamenting the US decision to recognize Israeli sovereignty over the Golan, adding that “this is certainly a source of serious concern for the countries that are in the direct vicinity of Israel. We hope a settlement to this problem will be found in the near future.”