In his trip to Israel and Lebanon this week, Secretary of State Mike Pompeo will emphasize the threat from Iran and Iranian-backed proxies. 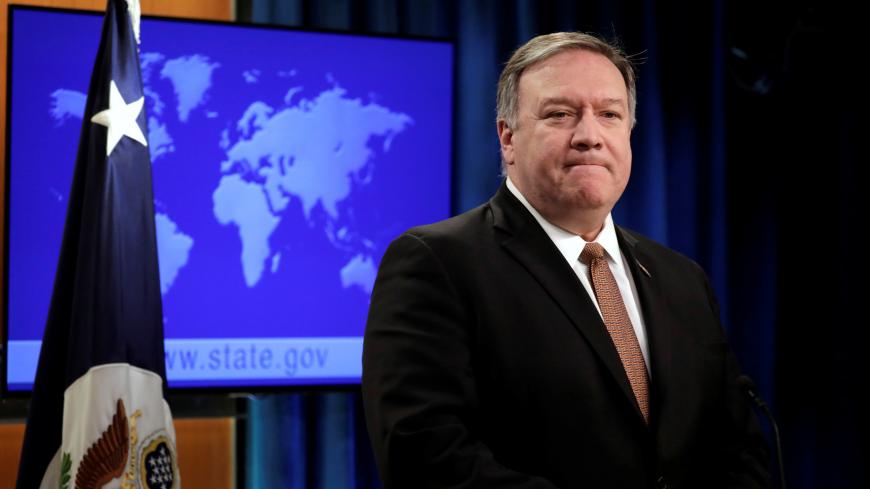 US Secretary of State Mike Pompeo pauses as he speaks during a news conference at the State Department in Washington, US, March 15, 2019. - REUTERS/Yuri Gripas

WASHINGTON — Secretary of State Mike Pompeo will emphasize the threat from Iran and Iranian-backed proxies such as Hezbollah when he travels to Kuwait, Israel and Lebanon this week, offering Israeli Prime Minister Benjamin Netanyahu yet another boost from the Donald Trump administration ahead of Israeli elections next month.

Pompeo will meet with Netanyahu as the head of Israel’s government, not as a candidate, and will not meet with retired Gen. Benny Gantz or any other candidates running in Israel’s elections, scheduled for April 9, a State Department official said.

“We have major US interests with Israel that don’t go into suspension because of the electoral cycle in Israel, [or] when we are in [an] electoral cycle, is precisely how you should view the frame for this visit,” the senior State Department official, speaking not for attribution, told journalists on a call today.

Nevertheless, Netanyahu and Gantz are both due to give keynote addresses to the American Israel Public Affairs Committee policy conference in Washington, DC, March 24 and 25, just after Pompeo returns from his latest trip to the region.

In Jerusalem, the second stop of the trip, Pompeo “will meet with a range of regional officials to discuss regional issues and challenges, [including] by Iran and Iranian proxies,” the US official said. “The secretary will reaffirm both privately and publicly the unwavering commitment to Israel’s security and right to self-defense.”

The State Department did not mention any prospective meetings with Palestinians.

Pompeo last traveled to the region in January but had to cut short his visit. He will begin the trip on March 19 in Kuwait, where he is leading the US delegation to the third annual US-Kuwait Strategic Dialogue.

In Kuwait City, in addition to the strategic dialogue, Pompeo will also hold bilateral meetings with Kuwaiti leaders to discuss regional issues, “such as Yemen and Syria, as well as progress on the Middle East Strategic Alliance and the need for [Gulf Cooperation Council] unity,” State Department deputy spokesman Robert Palladino said in a statement. The Kuwaiti emir, Sheikh Sabah Al Ahmad Al Sabah, has been leading the stalled regional efforts to resolve the dispute between Qatar and the bloc led by Saudi Arabia and the United Arab Emirates, which launched a blockade of Qatar in June 2017.

In Israel and Lebanon, Pompeo will offer US mediation to try to resolve a maritime border dispute between the two countries, in order to advance oil and gas exploration in the Mediterranean that could boost the region’s economies.

“The US stands ready … to facilitate discussions between the governments of Lebanon and Israel … for the resolution to their mutual benefit of the dispute involving potential off-shore resources,” the State Department official said. “The rest of the eastern Mediterranean is moving forward. … It would be regrettable if the people of Lebanon were denied, as a result of Hezbollah. … We stand ready to help.”

Pompeo’s trip to Beirut, his last stop, is aimed at showing that the United States is going to stay engaged in Lebanon and not cede it to Iranian influence.

The United States will continue to support political, security and economic counterweights to Iran and Hezbollah, particularly the Lebanese Armed Forces. The United States is also likely to announce further sanctions on Hezbollah-affiliated financial institutions and figures around the time of Pompeo’s visit, the Middle East Institute’s Randa Slim said.

Pompeo will meet with Lebanese President Michel Aoun and Prime Minister Saad Hariri, among other officials, the State Department official said. He will offer the Trump administration’s support for what he called “legitimate” Lebanese institutions, such as the Lebanese Armed Forces, over Hezbollah.

“We strongly support the continued US engagement with Lebanese security forces … as legitimate security institutions of Lebanon,” the US official said. “Our support for them, the work they do, [their] ability to be seen by the people of Lebanon as legitimate … stands in stark contrast to Hezbollah.”