Will US restrictions on Hezbollah lead to collapse of Lebanon?

On a five-day visit to Washington, a Lebanese delegation spoke to US officials about how to prevent collateral damage that could result from legal restrictions on Hezbollah. 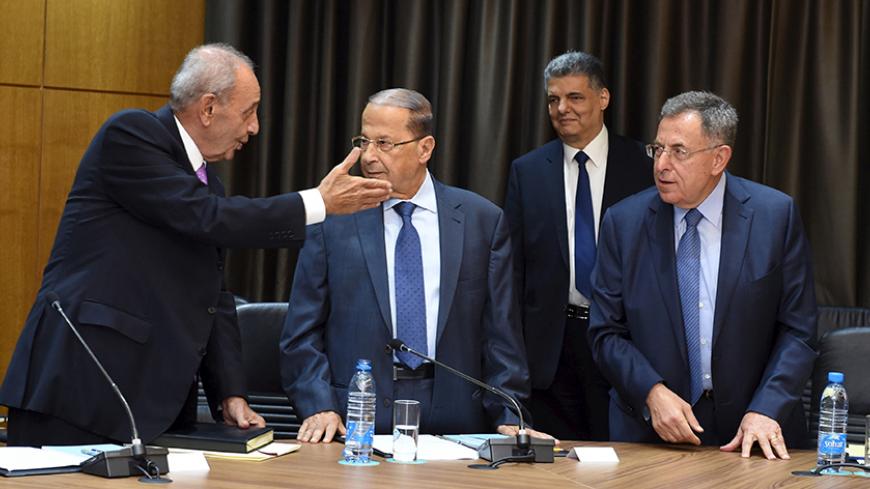 BEIRUT — A Lebanese parliamentary delegation met in Washington on Feb. 23-27 with numerous members of Congress, administration officials and various lobbies to discuss the potential consequences for Lebanon of the Hizballah International Financing Prevention Act of 2015.

The act, which US President Barack Obama signed into law Dec. 18, authorizes the president to apply sanctions against foreign financial institutions handling transactions with Hezbollah or the Hezbollah-affiliated Al-Manar TV channel.

“It was a very useful and very positive visit," member of parliament Alain Aoun, a delegation member, told Al-Monitor. "The people we met with in Washington reassured the Lebanese members of parliament that there is no need for any Lebanese tense reactions or concerns.”

Lebanese parliament Speaker Nabih Berri championed the idea to send a delegation to Washington. On Jan. 16, he called on a number of parliamentarians representing major parliamentary blocs, and discussed the need to spare Lebanon any negative effects from the mentioned act and learn from US officials about Washington’s orientation regarding Lebanon and Hezbollah in the future.

Aoun said that the delegation explained "the concerns of the Lebanese government, parliament, economic figures and citizens regarding the mentioned US act, particularly the potential negative repercussions on two key and vital sectors, namely banking and remittances transferred by Lebanese citizens living abroad to their families in Lebanon."

He added, "We told those that we met with that any potential damage to our banking sector, or any restrictions on those remittances — which amount to about $7.5 billion per year — would lead to a financial and economic disaster in Lebanon that would turn into a security catastrophe and a total collapse of the Lebanese state.”

Aoun said US officials seemed to clearly understand the concerns. They assured delegation members that there is latitude in how the act will be implemented, and the United States will take the Lebanese delegation’s remarks into account during that process and respond to its concerns.

Delegation members, Aoun said, felt a definite intent in Washington "to increase pressure on Hezbollah and escalate confrontation between the United States and Hezbollah.”

The members considered several possible reasons behind the US position. “They include Washington's commitment to its alliance with Israel, its desire to reduce the Iranian influence, even after the US-Iranian [nuclear] agreement, or to take into consideration [US ties with] Saudi Arabia, especially following the deal between Iran and the West," Aoun said.

Speaking about Saudi Arabia, Aoun revealed that the US officials “seemed very annoyed by Riyadh’s decision to halt the financial donation to the Lebanese army on Feb. 19.”

According to Aoun, the delegation recognized several possible reasons the United States would resent the Saudi decision.

“First is that Washington is keen to support the Lebanese army, especially at the current stage, in the face of any terrorist threats to Lebanon," Aoun said. "Second is that the United States was concerned with part of the commercial contracts emanating from the Saudi donation, as to the purchase of US weapons for the Lebanese army. The contracts that Washington lost amounted to $1 billion out of the $4 billion Saudi donation.

"Third is that the lack of armament will force Washington to raise its aid to the Lebanese army to compensate part of what the army has lost due to the Saudi decision and because it is keen to maintain the army’s readiness in the face of terrorism.”

Nevertheless, the United States doesn't seem to consider the general political situation in Lebanon a US priority, even though there has been a presidential vacancy in Lebanon since May 25, 2014, Aoun said.

"The US officials were keen not to dwell on the details of the Lebanese political crisis. They stressed that Lebanon’s security and stability is their greatest concern, but that the rest of the issues — whether the presidency, government and parliamentary elections, which were obstructed even prior to the presidential vacuum — are the responsibility of the Lebanese people.”

It seems the Lebanese members of parliament themselves were aware of this reality. They mainly limited their discussions in Washington to sparing Lebanon any collateral damages from the US war on Hezbollah. However, they are aware that the other Lebanese issues are linked to other conflicts that are no less virulent, including the fierce conflict between Riyadh and Tehran and the many struggles among the Lebanese themselves.

In addition to Aoun, who represented the Change and Reform Bloc led by Christian majority leader Gen. Michel Aoun, the Lebanese delegation consisted of parliamentarian Yassine Jaber representing the Shiite Amal Movement that is led by Berri, and members of parliament Mohammad Kabbani, Robert Fadel and Bassem el-Chab, who all represent the Future Movement led by Sunni majority leader Saad Hariri.

The delegation's busy agenda during the visit also included meetings with officials in charge of the Lebanese dossier at the Pentagon and National Security Council (NSC). Moreover, a meeting was held at the White House with the NSC's directors for Middle East affairs, counterterrorism and international economic affairs.

In addition, the delegates met with members of relevant congressional committees, such as Daniel Donovan, Ted Yoho, Mark Meadows, Richard L. Hanna, Darrell Issa, Matt Salmon, Betty McCollum and David Cicilline, and with senior officials of the World Bank, the International Monetary Fund, the American Task Force for Lebanon and many others.