How Aoun rose from '90s renegade to Lebanon's new president

The election of Gen. Michel Aoun as Lebanon’s president ends a 2½-year void in the office but also divides the Lebanese public, with some considering him the candidate of Hezbollah. 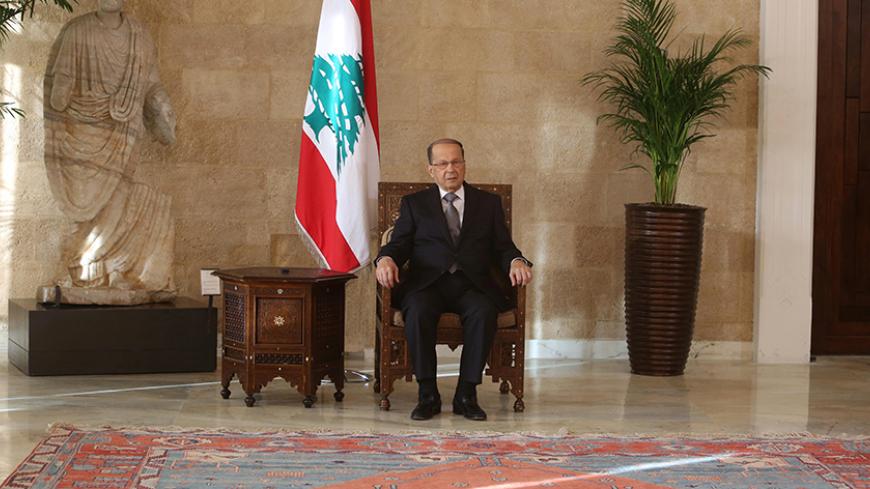 Michel Aoun will never forget two Octobers in his life: one that saw him ousted, humiliated and sent into exile on Oct. 13, 1990, and one that came 26 years later when he was elected on Oct. 31, 2016, as Lebanon’s 13th president. The 81-year-old former military chief of staff sat inside the parliament’s main chamber while his fellow members of parliament voted for him.

Watching from the 1934 building’s mezzanine was Aoun's family, including his daughters, sons-in-law and grandchildren. Beside them sat famous Lebanese singer Julia Boutros, whose husband is Education Minister Elias Bou Saab, one of Aoun’s Cabinet members. At the same level sat former Lebanese presidents Michel Suleiman and Amin Gemayel, along with commanders of the army, internal security and general security officials, and journalists.

In the first round, Aoun received 84 votes out of 127, not enough to secure a win. He might have received more, as there were at least two write-in votes apparently cast in jest or protest against Aoun: one for the fictional novel and film character "Zorba the Greek," and another for risque Lebanese model Myriam Klink, who later retweeted a photo that had been altered to show her sitting in the presidential palace.

Klink's nomination drew amusement and consternation on Twitter: "Myriam Klink? Seriously? And we still think there's hope for this desperate country?" one tweet read. Another said, "The presidential voting is much more entertaining than Miss Lebanon elections!" Ahmed Al Omran, a Saudi correspondent for The Wall Street Journal, noted the vote for Klink on his Twitter page Oct. 31. One reader responded, "So? [Donald] Trump has a real shot at the US presidency."

As the session was wrapping up, former Lebanese Culture Minister Gaby Layoun told Al-Monitor, “I am speechless. Aoun is a man of passion. He loves people; he wants to help make this country great.” Layoun believes Aoun is not looking for power. “At his age he can live a better life ... but he has a commitment to serve this nation, and hopefully he is going to do so regardless of anything. Gen. Aoun is not someone who could be pressured, whatever the circumstances are.”

In the main chamber, parliament Speaker Nabih Berri — who staunchly refused to vote for Aoun — gave a speech at the end of the session and then called the newly elected president to take the oath. For the first time in years, Aoun seemed cautious while reading his speech. It seemed clear that Aoun the president is not the same as Aoun the party leader, as he was keen to reassure different political factions and address their concerns. While he stressed the importance of political stability, Aoun said his country is currently sitting amid landmines and surrounded by the fires raging in the region. He said his priority is to prevent any sparks from those fires from spreading to Lebanon.

Lebanon, he insisted, must stay out of regional conflicts and follow an independent foreign policy in accordance with its interests. Yet in the same speech, Aoun confirmed that Lebanon “will not spare any kind of resistance in the struggle with Israel to liberate occupied Lebanese territories” and “will resort to pre-emptive deterrence in dealing with terrorist threats.”

Lebanese Forces Party leader Samir Geagea, a longtime rival of Aoun who recently became an ally, saw the speech as “promising.” He added, “The most important part was that [Aoun] stressed building the state, the army and the economy, along with Lebanon’s commitment to the Arab League.”

Outside parliament, Suleiman Franjieh, once Aoun's ally and today a rival, told Al-Monitor and other media outlets that he will be part of the opposition. However, he said he regards Aoun’s election as a victory for the political alliance that brings them together. Franjieh, a former chief of numerous government ministries and current member of parliament, added, “We will go to the consultations, and then we will decide whether to take part in the [new] government or not.”

This same presidential palace in Baabda was the venue of his 1990 defeat by the Syrian army, which was in control of Lebanon at that time. But on this day, he walked the red carpet while reviewing the presidential guards. “It is a rare moment in the history of Lebanon and the Middle East,” George Eid, an Aoun supporter, told Al-Monitor. "It is not easy to make such a comeback unless you are Michel Aoun."

While Aoun’s supporters see this as the Christian candidate's heroic return, there are those who voiced serious opposition to his election. Sami Gemayel, head of the Kataeb (Phalange) Party, and his parliamentary bloc all voted against the new president. Gemayel believes Aoun is Hezbollah’s candidate, and Aoun did receive Hezbollah backing.

Gemayel’s point is grounded in popular bases opposing Aoun’s presidency. These groups are concerned about possible growth in the influence of the Hezbollah political party and its Shiite Islamist militant group. Such concerns might have even intensified after they learned that the first calls Aoun received after arriving at the presidential palace were from Hezbollah Secretary-General Hassan Nasrallah, Iranian President Hassan Rouhani and Syrian President Bashar al-Assad.

As formalities were taking place in the presidential palace, the streets of the Christian neighborhood of Achrafieh were getting crowded. Aoun supporters were celebrating their leader’s victory. Dozens of them sat in front of a huge screen watching, moment by moment, as the events took place on “Big Monday,” as it was called here in Beirut. They were, for the first time, having a full-fledged celebration. “He is the father of all Lebanese,” an Aoun supporter who only gave his name as Salam told Al-Monitor.

“A few years ago, it was a crime to say you supported Michel Aoun. We were beaten in the streets, jailed and humiliated, but today we are forgiving everyone, and we will remember our martyrs who fell on the path to freedom. But yes, it is time that they acknowledge we were right,” Salam said.