Secretary of State Mike Pompeo’s new Iran policy announcement could have repercussions on US efforts to save the Gulf Cooperation Council. 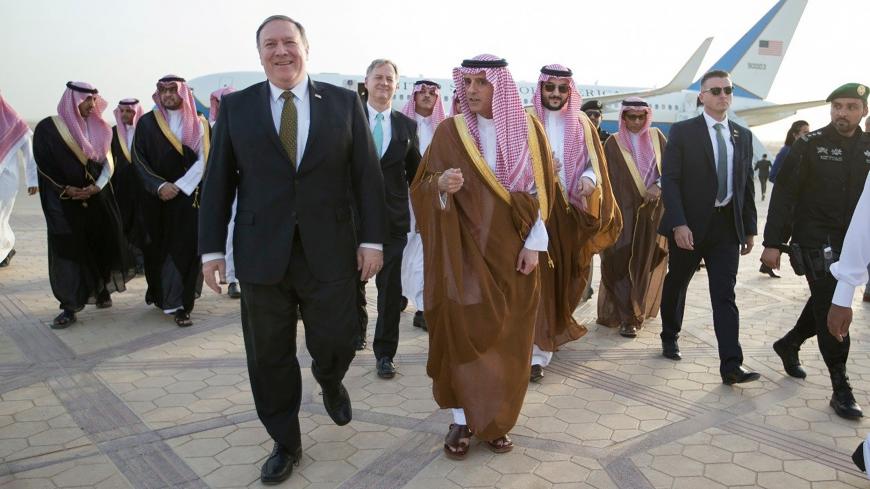 Secretary of State Mike Pompeo’s call for US allies to get tougher on Iran could cause further fissures in an embattled Gulf alliance already shaken by the Saudi-led blockade of Qatar.

In his first major foreign policy address today, just two weeks after President Donald Trump pulled out of the 2015 Iran nuclear deal, the former CIA director called out all six members of the Gulf Cooperation Council (GCC) by name to rally around renewed US sanctions on Tehran.

The effort could pit anti-Iran aligned Saudi Arabia, the United Arab Emirates and Bahrain against Qatar, Kuwait and Oman, which favor a less confrontational approach to their powerful neighbor. The unveiling of the new US strategy comes even as the State Department pursues a meeting of the GCC bloc to patch up the nearly year-old Saudi-led embargo of Qatar over its ties to Iran and Islamist groups.

Pompeo acknowledged Monday that US partners would face financial pressures from the reimposition of US sanctions on Tehran.

“Any time sanctions are put in place, countries have to give up economic activity,” Pompeo said in a speech at the conservative Heritage Foundation. “Everyone is going to have to participate in this.”

Pompeo said the United States would end sanctions if Tehran meets at least a dozen conditions, including complying with inspections on its nuclear program, halting support for proxies in Syria, Yemen and Lebanon and releasing US prisoners. A Defense Department spokesperson said at a briefing that the Pentagon is still assessing whether to take any new steps to counter Iran’s influence after Pompeo’s remarks.

Yet the Trump administration has also sought to resolve the dispute concerning Qatar, where the United States has its largest military base in the region — an effort that could be disrupted by the new turn on Iran. On Monday, Pompeo’s deputy John Sullivan “emphasized the United States’ desire to resolve the Gulf dispute” in a meeting with Saudi Foreign Minister Adel al-Jubeir, and pushed for a September GCC meeting on the sidelines of the Group of 20 summit in Argentina.

The Gulf alliance appeared to come undone last year, when only high-level Kuwaiti and Qatari diplomats showed up for a meeting in November. And efforts to hold a Camp David-style summit of the GCC stalled when Trump fired Secretary of State Rex Tillerson in a surprise tweet.

Experts say Pompeo’s speech is a sign that the United States is moving ahead with a policy to hold Iran in check, whether the GCC can patch things up or not.

“The GCC doesn’t exist anymore,” said Theodore Karasik, a senior adviser to Gulf State Analytics, a Washington-based consulting firm. “That is not in the picture here. What is in the picture is that there are Gulf states divided amongst themselves.”

Though Saudi Arabia has sought a stronger US policy to counter Tehran as it faces an uptick in Scud missile attacks from Iran-backed Houthi rebels along its southern border in Yemen, other US allies in the region stand to lose from stronger sanctions.

The emirate of Dubai is a top importer of Iranian goods, both legally and illegally, with trade jumping from $2 billion to $7 billion from 2016 to 2017, according to the International Monetary Fund. Qatar splits the world’s largest natural gas field with Iran. Kuwait sought to patch up Doha’s relationship with Saudi Arabia in November. And in Oman, which served as a back channel for US-Iranian talks that paved the way for the nuclear deal, the northern port of Sohar has become a go-between for Qatar during the blockade and is now set to become a major thoroughfare for Iranian shipping.

“A united GCC front alone is just window dressing,” a Washington-based foreign policy expert told Al-Monitor on condition of anonymity. “There is an ideological difference about how they treat Iran.”

“Pompeo’s speech was essentially saying to Iran, roll over and play dead,” Karen Young, a senior resident scholar at the Arab Gulf States Institute, told Al-Monitor. “It leaves very little room for a face-saving reaction or any sort of exercise of Iranian foreign policy.”