In a quiet visit overshadowed by domestic US political turmoil, Kuwait’s emir visited the White House on Wednesday. 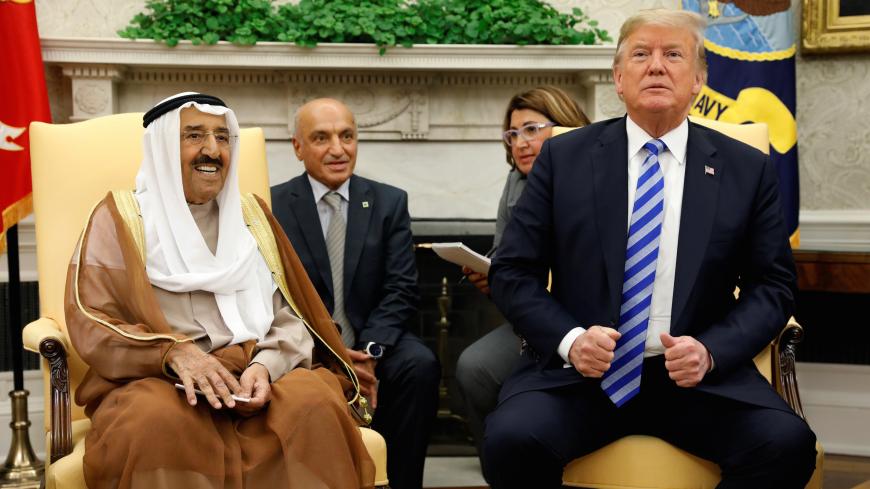 US President Donald Trump meets with the Emir of Kuwait Sabah Al-Ahmad Al-Jaber Al-Sabah at the White House in Washington, DC, US, Sept. 5, 2018. - REUTERS/Kevin Lamarque

US President Donald Trump tried to move past the latest bombshell political book and the pitched battle over his Supreme Court nominee as he hosted Kuwait’s Emir Sabah Al-Ahmad Al-Jaber Al-Sabah at the White House today.

Even then, the low-key Oval Office meeting, billed as a friendly bridge-building exercise with the tiny oil-rich emirate, could not avoid wading into troubled political waters. Beneath the facade, the emir’s visit was largely about patching up the 15-month embargo by Saudi Arabia and the United Arab Emirates against Gulf neighbor Qatar, a crisis that Kuwait has tried to mediate.

“We are working to reach an end to the crisis in the Gulf,” Sabah said during a joint press conference with the US president.

Calling the emir “a special friend of mine” in a surprise question-and-answer session that lasted 10 minutes, Trump thanked Kuwait for investing in the United States and helping to fight terrorism. The meeting comes ahead of a possible Gulf Cooperation Council (GCC) reconciliation meeting in October that will deal mainly with Iran.

“We’re also talking about other things such as Qatar … coming back into the fold with [the] UAE and, as you know, Saudi Arabia,” Trump added. “That’s been going on for a long time.”

Experts say Kuwait remains the most important US back channel into the longstanding Gulf crisis.

“The most important reason why [the emir is] here is the GCC reconciliation process,” said Sigurd Neubauer, a Middle East analyst based in Washington. “The US has never recognized the diplomatic onslaught and the demands imposed on Qatar as legitimate.”

US and Kuwaiti efforts to broker a deal to end the squabble petered out in May, when UAE and Qatari officials fought over which country would have the last word with Trump before a proposed reconciliation summit. Ever since, Secretary of State Mike Pompeo has refocused his engagement in the region on Iran following Trump’s decision to exit the 2015 nuclear deal in May.

In his remarks with the emir, Trump stuck out another olive branch to Tehran, telling reporters he’d “always be available” for talks with the Islamic Republic, which he said is “worrying about their own survival as a country.” Despite beginning to reimpose sanctions this summer, Trump hinted he’d be willing to speak with President Hassan Rouhani without preconditions, even as Pompeo has laid out 12 conditions for a potential meeting.

The Trump administration insisted the visit stuck to bilateral issues. A US official told Al-Monitor that the meeting sought to advance on the emir’s agenda from his 2017 White House visit, including tightening US-Kuwaiti ties on aviation and fostering a stronger business relationship.

Prior to today’s White House meeting, the sizable Kuwait delegation, which includes the foreign minister and the ministers of interior and finance, signed a cybersecurity agreement with the State Department and a nuclear trafficking ban with the Department of Energy. A congressional aide, however, told Al-Monitor that the delegation would not stop by Capitol Hill during the visit. The emir also signed memorandums of understanding with US companies including Amazon and leaves tomorrow for a private visit to New York, the last leg of the trip.

Even as the Qatar crisis has long since frozen over, experts have increasingly raised questions about Saudi and Emirati resolve to continue the blockade, as both countries face potential leadership challenges. Specifically, that pressure could give the sides a window to make a deal before the potential GCC summit in October.

“The emir’s visit is about more than just GCC unity,” said Theodore Karasik, a senior adviser at Gulf State Analytics, a Washington-based consulting firm. “Given uncertainty in political infighting in both UAE and Saudi, there might be an unexpected twist in how the Qatar crisis proceeds.”