The list of disagreements between the United States and Turkey is growing with Washington's decision to recognize the Golan Heights as belonging to Israel. 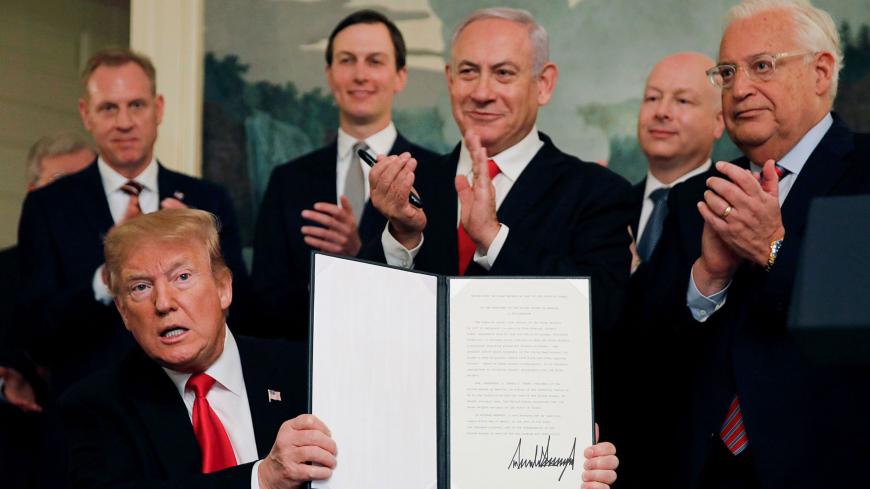 US President Donald Trump holds a proclamation recognizing Israel's sovereignty over the Golan Heights as he is applauded by Israel's Prime Minister Benjamin Netanyahu and others during a ceremony in the Diplomatic Reception Room at the White House in Washington, March 25, 2019. - REUTERS/Carlos Barria

Turkish President Recep Tayyip Erdogan took a clear, strong stance against the recent decision by US President Donald Trump to recognize the Golan Heights as Israeli land. What remains unclear, though, is how he might follow through on his strident opposition.

“Trump's unfortunate statement has brought the region to the brink of a new crisis,” Erdogan said March 22 during his speech addressing foreign ministers at the Organization of Islamic Cooperation (OIC) meeting in Istanbul.

“Turkey and the OIC cannot be expected to remain silent on such a sensitive issue and submit to a fait accompli. We can never allow legitimization of occupation," Erdogan said at the meeting.

Turkish Foreign Minister Mevlut Cavusoglu also expressed his opposition quickly. “Attempts by the US to legitimize Israel’s actions against international law will only lead to more violence and pain in the region," he tweeted March 21. "Turkey supports Syria's territorial integrity."

Turkey proclaims it is sensitive to the territorial integrity of other countries, probably because of its own fears of an “independent Kurdistan."

Turkey loudly protested Trump's December 2017 decision to relocate the US Embassy in Israel from Tel Aviv to Jerusalem and acknowledge Jerusalem as the capital of Israel. However, in Turkish foreign policy, the status of the Golan Heights isn’t as important as Jerusalem's.

In 1981, when Israel decided to annex the Golan Heights it had captured from Syria in 1967, the Turkish government’s reaction was limited to condemning the decision in a statement; Ankara refrained from using its rights to protest under international law. For example, the Turkish Embassy in Damascus had suggested that Ankara declare it “preserves its right to object,” to defend the rights of Turkmens who lived in 22 villages for 1,000 years, but Ankara decided not to do this.

So, what's the cause of the current anger and sensitivity Turkey expresses over the status of the Golan Heights? Erdogan had done everything in his power to topple the Syrian regime since 2011, only recently changing his tune.

“We will pursue the Golan Heights until the end,” Erdogan said during a recent election rally in the central Anatolian province of Konya.

Yet Turkey’s opposition to the Trump administration's decision to recognize the Golan Heights as `Israeli territory doesn’t mean Turkey will put aside the conditions it has set for rebuilding its ties with Damascus. Turkey expects the Syrian regime to develop a new constitution that provides rights for the opposition, and wants elimination of the autonomous Kurdish entities in northern Syria, which Turkey considers a threat to its border.

Syrian peace talks held in Astana, Kazakhstan, and organized by Iran, Russia and Turkey, were built on United Nations Security Council Resolution 2254. The resolution emphasizes the importance of Syrian territorial integrity, but doesn’t make any reference to the Golan Heights problem, so it doesn't provide any possible solution on the matter.

The Iran-Russia-Turkey trio could very well add the Golan Heights matter to its agenda, to increase pressure on the United States, but even if that happens, nobody really expects the conflict to become a top priority for the three governments.

According to Yasar Yakis, a former Turkish foreign minister, Erdogan’s opposition to the recognition of the Golan Heights as Israeli territory isn't only about Turkey’s sensitivity regarding other countries' territorial integrity, but also about Erdogan’s tendency to oppose all Israeli policies as a whole.

Though Iran is likely to add the issue to the Astana agenda, accompanied by Russia and Turkey, this will not alter the Astana priority of eliminating armed groups and securing internal peace in Syria. In other words, the Syrian process will not be linked to ousting Israel from the Golan Heights, according to Yakis.

Thus, the Golan Heights conflict is now poised to be added to the bilateral issues between the United States and Turkey. Those ties are already strained due to other disagreements over US support of Syrian Kurdish groups, and Washington's refusal to extradite cleric Fethullah Gulen, whom Turkey accuses of plotting the coup attempt in 2016. Turkey’s determination to purchase Russian S-400 missile systems also adds to US-Turkey friction.

Should one expect to see yet another flare of tension between the United States and Turkey because of the Golan Heights? “Turkey had raised its voice over the transfer of the US Embassy from Tel Aviv to Jerusalem, but then quickly kept mum, just like that. Our reaction to the Golan Heights will be similar,” Yakis said.

Former diplomat Aydin Selcen, meanwhile, links Erdogan’s stance to the current situation. “After the massacre in New Zealand, the OIC met in Istanbul in response to Turkey’s call. Erdogan couldn’t remain mum,” Selcen told Al-Monitor. “Trump — with his Golan tweet — gave support to Netanyahu on the eve of the Israeli elections. We have elections coming up in Turkey. Erdogan’s [antagonistic] relations with Netanyahu are obvious. That's why I wasn’t surprised by Erdogan’s reaction.”

Nevertheless, Selcen does not think the Golan Heights conflict will have the same prominence as the other important disagreements between Ankara and Washington. “Turkish-US ties are in a state of a car crash because of the S-400s/F-35 equation, moving from slow motion to real time. The Golan Heights are neither more nor less detail in this respect,” Selcen added.

Palestine and Syria are the leading foreign policy issues Turkey turns to when it wants to shift public attention away from domestic policies. Thus, just as in many other loud showdowns, Turkey’s opposition to Trump's Golan Heights move could remain mere rhetoric.