Iran’s adoption of a low-profile position on Trump’s recognition of Israeli sovereignty over the Golan Heights appears to be a calculated move to maximize Iran's regional interests. 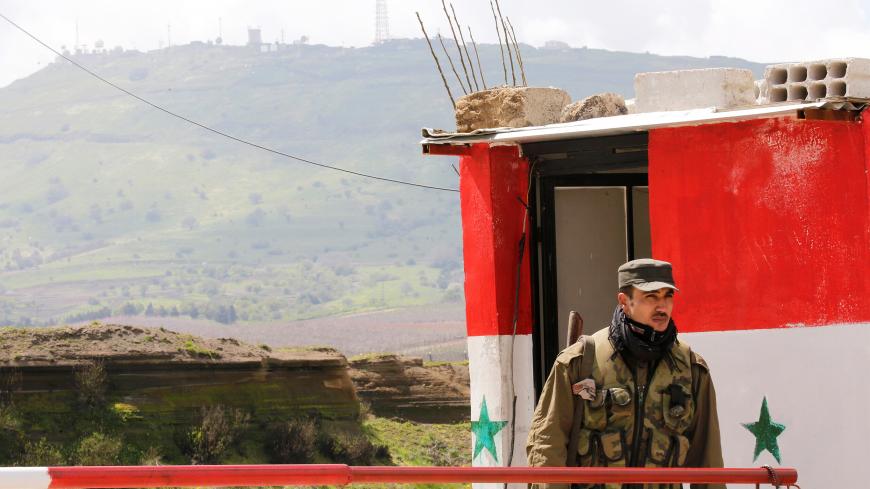 A Syrian army soldier stands at a checkpoint at the Quneitra crossing between the Israeli-controlled Golan Heights and Syria, seen from the Syrian side in Quneitra, Syria, March 26, 2019. - REUTERS/Omar Sanadiki

US President Donald Trump’s March 21 decision to recognize Israeli sovereignty over the Golan Heights has sparked widespread international reaction. While European countries announced that they would not follow suit, Russia expressed concern over the “negative repercussions” of the move. Turkey adopted a more active stance, calling for an emergency meeting of the Organization of Islamic Cooperation (OIC). Trump’s announcement was also met with negative reactions from Arab allies of the United States.

Iran’s adoption of a low-profile position on Trump’s recognition of Israeli sovereignty over the Golan Heights appears to be a calculated move to maximize its regional interests. However, despite being the Syrian government’s main ally, Iran’s initial reaction to the American move has been rather mild — and in fact not much different from the positions of other nations. While “strongly condemning” Trump’s decision, Iranian Foreign Ministry spokesman Bahram Ghassemi said March 22, “According to the resolutions of the United Nations and the Security Council, the Golan Heights is an occupied part of the Syrian territories and no solution for this [issue] is conceivable except for ending the occupation.”

Meanwhile, attending the OIC summit in Istanbul, Iranian Foreign Minister Mohammad Javad Zarif on March 22 took to Twitter to express "shock" over Trump’s attempts “to give what is not his to racist Israel.”

But the Islamic Republic’s first major reaction came only several days later, on March 26, when President Hassan Rouhani compared the US move with the behavior of “colonial powers” in the past and called for “closer regional cooperation” to counter the United States and Israel. As such, for almost a week after Trump’s announcement — and with the exception of Zarif’s tweet — no high-ranking Iranian political or military official took a stance on this issue. This can be confounding since, to reiterate, Iran is the Syrian government’s main ally — and because the US move to recognize Israeli sovereignty over the Golan Heights has been broadly condemned internationally.

However, this does not mean that after eight years of supporting Syrian President Bashar al-Assad’s government against domestic and foreign opponents, Iran has decided to adopt a low-profile position on this very important issue — nor does it mean that Tehran lacks a strategy for how to make use of the contention to maximize its regional interests. In fact, both internal and external factors have been at play in Iran’s mild and delayed reaction to the American move on the Golan Heights.

First and foremost, Trump’s tweet on recognition of Israeli sovereignty over the Golan Heights on March 21 and his official presidential order four days later came in the middle of the Iranian New Year holidays, when most governmental bodies do not operate at full capacity. At the same time, the catastrophic floods that have hit many areas in northern and western Iran have absorbed almost all of the capacities of the Iranian authorities. Even the Iranian military was ordered by Supreme Leader Ayatollah Ali Khamenei to mobilize forces to help normalize the situation in flood-hit areas. In other words, there has been little time for the government to focus on external issues. As such, when the holidays end and the floods subside, more concrete reactions over the Golan Heights issue are to be expected from the Islamic Republic.

But this has not been the only reason for Iran’s moderate approach so far. In a situation where even the closest Arab allies of the United States are widely condemning Trump’s move, any harsh or threatening reaction from Tehran could change the overwhelmingly Arab/Muslim-Israeli dichotomy over the Golan Heights to an Iranian-Israeli one. As such, a forceful and immediate Iranian entry into the matter would not only induce reservation among Iran’s Arab rivals about appearing on the same side as the Islamic Republic, but could also be seized on by Washington and Tel Aviv to justify their move by resorting to rhetoric on the need to counter the “Iranian threat.”

Thus, Tehran may now be in wait-and-see mode to examine whether — and how — Arab resentment over Trump’s move could potentially pause the push by Arab allies of the United States to warm relations with Israel with the aim of countering Iran. United Arab Emirates Minister of State for Foreign Affairs Anwar Gargash has already expressed concern about such a possibility, saying March 28 that it is necessary for the Arabs to “dissect and divide between having a political issue and keeping your lines of communication [with Israel] open.” Therefore, Tehran is in no hurry to provide any pretexts for its Arab rivals — and their American and Israeli interlocutors — to exit a situation in which coordinated maneuvering against Iran has become more complex.

As for Turkey having been the most outspoken regional state so far, Iran not only feels comfortable with Ankara taking the lead in calling for international and intra-Muslim action on the Golan but in fact welcomes such a stance. Turkish President Recep Tayyip Erdogan’s first reaction to Trump’s decision contained a strong warning that his country “can never allow legitimization of occupation.” Turkish Foreign Minister Mevlut Cavusoglu had adopted a similar position earlier, saying, “Turkey supports Syria's territorial integrity.”

These statements notably come at a time when Turkey itself has effectively seized control over vast areas in northern Syria, while threatening to advance farther toward the east to counter Syrian Kurdish armed groups. As Ankara's plans for northern Syria have been a major concern for Turkey’s two partners within the Astana framework — Iran and Russia — the recent strong anti-occupation stance of the Turkish officials can be used by Tehran to pressure Ankara to return territories to the Syrian government and respect Syria’s territorial integrity.

Finally, it’s worth mentioning that the US attempt to legitimize the Israeli occupation of the Golan Heights could provide Iran with another reason to maintain its military presence in Syria. Iranian officials have always said their presence in the Arab country is at the request of Damascus and with the primary aim of combating terrorism. Now that the Syrian government vows to confront the Israeli occupation of its soil, it will most likely further extend Iran’s mandate to stay in Syria — even in a scenario in which all terrorist groups have been defeated. After all, the Islamic Republic is the only ally of Damascus with a real aim of helping it confront Israel.

This, of course, does not mean that a joint Iranian-Syrian military response to Israel is on the horizon. Rather, Iran will most probably encourage the so-called resistance movements around the region to act against the Israeli occupation so that Tel Aviv will be faced with simultaneous pressures from various fronts, which will be hard for Tel Aviv to effectively deal with. In this vein, Hezbollah chief Hassan Nasrallah’s March 26 speech in which he declared “resistance” as the only way to take back occupied lands in Syria, Lebanon and Palestine is a sign indicating that such a development is already underway. As such, while Trump’s decision to recognize Israeli sovereignty over the Golan Heights might have been a political victory for the Israeli prime minister, it may come back to haunt him on the ground down the road.