Palestinians hope Turkish President Recep Tayyip Erdogan will cut ties with Israel and focus even more on their cause. 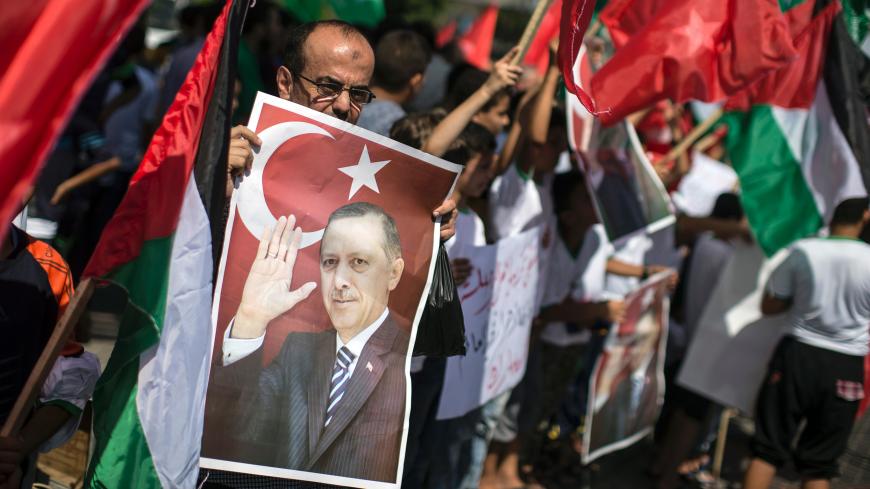 It's an understatement to say Palestinians like Turkish President Recep Tayyip Erdogan. They might like him more than many Turks do. Palestinians name stores — and even babies — after him.

This week, Palestinians watched closely as Turks headed to polling stations June 24 to cast their votes in the parliamentary and presidential elections. Turkey has become the Palestinian people’s No. 1 choice when it comes to tourism, education, trade and now, perhaps, in politics.

Palestinian social media was buzzing with comments on Erdogan's victory, though his ruling Justice and Development Party lost the majority in parliament. Palestinian President Mahmoud Abbas congratulated Erdogan by phone. Palestinian Foreign Minister Riad Malki contacted his Turkish counterpart, Mevlut Cavusoglu, saying the results of the Turkish elections were a victory for Jerusalem. (Both Israelis and Palestinians consider Jerusalem their capital.) Ismail Haniyeh, head of Hamas’ political bureau, also called Erdogan to congratulate him and inform him that a delegation will visit Turkey soon.

Arabs in Israel also had their say. Two Arab Knesset members, Taleb Abu Arar and Abdel Hakim Haj Yahya, congratulated the Turkish president June 25. Kamal al-Khatib, deputy head of the Islamic Movement in Israel, said Erdogan's victory was a slap in the face of US and Israeli collaborators.

Izzat al-Rishq, a Qatar-based member of the Hamas political bureau and head of Hamas’ office of Arab-Islamic relations, called Erdogan's success a well-deserved conquest for Turkey. Rishq told Al-Monitor, “Turkey’s positions, led by Erdogan, in terms of supporting Palestine and its people, are the reason why Palestine is that interested in Turkish foreign policy and the Turkish people. Erdogan’s victory will improve this policy.”

On June 26, Ahmad Bahar, deputy chairman of the Palestinian Legislative Council, said in a statement that Erdogan's win thwarted regional and international efforts to deflect Turkey from its "avant-garde role" in adopting the Palestinian cause.

Turkey and its humanitarian institutions provide great assistance to Palestinians, and Turkish hospitals recently received 13 Palestinians who were wounded in the Great Return March.

Erdogan's victory coincided with a June 25 conference in New York to support the UN Relief and Works Agency for Palestine Refugees (UNRWA). Pierre Krahenbuhl, UNRWA commissioner-general, thanked Turkey for its assistance to the Palestinians. Turkey's UNRWA representative, Feridun Hadi Sinirlioglu, said during the conference, “Turkey has been one of [UNRWA’s] biggest supporters since its founding. We have pledged [at this conference] $1.5 million in aid. We also offered $1.2 million to the World Health Organization to treat Palestinians who were wounded in recent clashes with Israeli forces during the Gazan marches of return.”

Yet even with all the praise, there's still much to do.

​“Palestinians expect more from Erdogan," Hussam al-Dajani, a political science professor at al-Ummah University in Gaza, told Al-Monitor. "Their congratulations are of a protocol nature because he is preoccupied with his country's internal issues, especially [with its currency problems]. Erdogan wants to have influence on regional affairs, like in Syria and Iraq. Although Turkey's political and media rhetoric [regarding the Palestinian cause] is much better than that of other countries, we, as Palestinians, see its role as underwhelming. We hope for more.”

He added, “We wish [Turkey] wouldn't treat the Palestinian cause as a card to play when it best serves its regional policy. We are concerned that it might be pressured by the US, now that elections are over, to conclude the ‘deal of the century’ at the expense of the Palestinians.” He was referring to US President Donald Trump's proposal to settle the differences between the Palestinian Authority and Israel.

Hazem Qassem, the Hamas spokesman in the Gaza Strip, told Al-Monitor, “Hamas is congratulating Erdogan for the success of the democratic experiment and for winning the presidential elections. Hamas wants to build relations with regional countries such as Turkey and wants to stand by the right of the Palestinian people to confront Israeli aggression.”

Qassem added, “Now that the elections are over, we hope Turkey can support our people in light of talks about a pro-Israeli US plan and the tightened blockade on Gaza.”

Erdogan has condemned the US decisions to recognize Jerusalem as the capital of Israel, and to relocate the US Embassy from Tel Aviv to Jerusalem.

Israeli officials, meanwhile, have remained silent on Erdogan’s victory and have yet to congratulate him. Tensions in Israeli-Turkish relations are escalating; the countries recalled their respective ambassadors May 16. The moves came in response to Israeli soldiers killing at least 60 Palestinians who were protesting near the border with Israel two days before.

The situation isn't likely to improve anytime soon, as Israeli media reported this week that Washington reached an understanding with Egypt, Jordan, Saudi Arabia and the United Arab Emirates to move forward with Trump's plan even without Abbas' approval. These nations don't mind US efforts to revive the peace process in the region and have jointly agreed not to oppose the deal, despite Abbas’ rejection of it.

The most crucial point keeping Palestinians up at night is that, despite Erdogan’s support for Palestine and condemnation of Israel, his political, economic and security relations with the latter still stand. Palestinians aren't pleased with this behavior and they hope he will cut such ties now that he's been re-elected.