What’s next for Syria after Helsinki summit?

The meeting between the Russian and US presidents did as little for the Middle East as it possibly could, though the two leaders seemed to identify Syria as a good place to rebuild US-Russian cooperation. 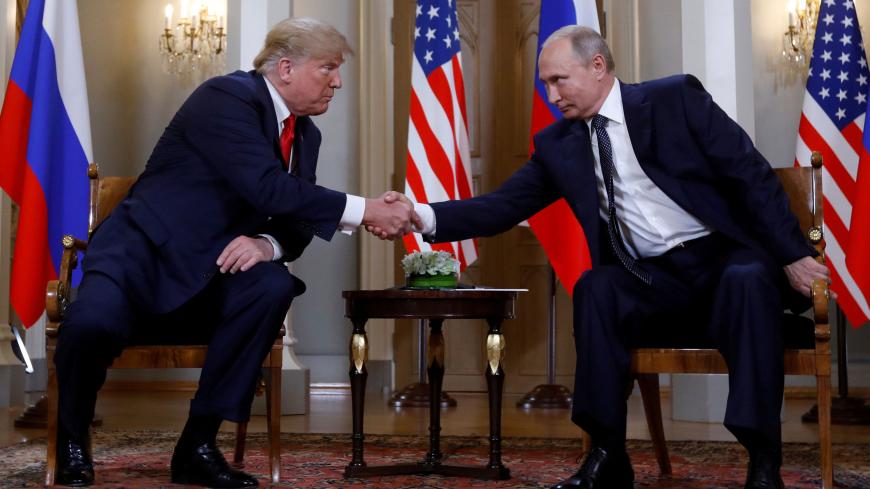 MOSCOW — The summit in Helsinki between US President Donald Trump and his Russian counterpart, Vladimir Putin, was arguably this summer’s most anticipated political event. While the meeting might have turned a new page in the US-Russian relationship, it also sparked a surge of opposition to Trump over what is seen as Russian interference in the presidential election of 2016, an issue Putin has continuously dismissed as mere domestic political strife. The two men seemed to dedicate the lion’s share of their more than two-hour-long, face-to-face meeting to this issue.

Against this background, matters concerning the Middle East appeared rather marginal. In a way, it is a manifestation that contrary to the widespread belief that the Middle East is a dominating issue for Moscow and Washington, the region, including the conflict in Syria, actually ranks low on the US-Russian agenda. Yet given the geopolitical complexities and, most important, the close proximity within which the Russian and US militaries have been operating, neither the Kremlin nor the White House can ignore the region, and there are good reasons to view Syria as a good place to start bridging the divide between the two powers.

“It’s time to talk in detail about our bilaterals, as well as about some of the hot points between our countries,” Putin reportedly told Trump in his opening remarks. Given that most of the following joint press conference was dominated by the topic of election interference, it might appear that Trump and Putin made little progress on substantive aspects vis-à-vis Syria and Iran, the two subjects widely expected to be on the agenda. This observation may well be accurate, since the two leaders appear to have focused more on fixing the bilateral relationship and to have spent less time discussing regional crises. In this sense, the content of the meeting between Foreign Minister Sergey Lavrov and Secretary of State Mike Pompeo is probably more interesting. The first meeting between the top Russian and American diplomats ran in parallel to the presidential talks. It was held behind closed doors, and few details have thus far been released.

Yet both Putin and Trump outlined what can be considered their road map on Syria, which their teams negotiated with one another and their respective regional stakeholders.

“As far as Syria is concerned, the task of establishing peace and reconciliation in this country could be the first showcase example of the successful joint work,” Putin said at the press conference. “Russia and the United States apparently can act proactively and take considerable leadership on this issue, and organize the interaction to overcome humanitarian crisis and help Syrian refugees to go back to their homes. In order to accomplish this level of successful cooperation in Syria, we have all the required components.”

One of those components is military coordination between Russia and the United States. Both presidents praised their military-to-military contacts on Syria and stressed each's professionalism. Putin also urged that contacts between their security and intelligence services be put in a “systemic framework” and reminded Trump of a Russian proposal — probably dating to the early years of Putin’s presidency, in the early 2000s — to create a working group on countering terrorism.

Another component is institutional cooperation. Putin said that Russia will continue its work within the Astana format together with Turkey and Iran, but is ready to engage with the so-called small group — a diplomatic arrangement lead by France and the United States that also includes the United Kingdom, Germany, Jordan and Saudi Arabia — “to maximize our fighting chance to get the ultimate success.”

What could become another component is Russia’s declared openness to engagement with Western powers, mostly France and the United States, on humanitarian issues and relief efforts. Moscow says it is prepared to provide military transportation aircraft for deliveries of humanitarian aid and other relief efforts.

“The south of Syria should be brought [in]to full compliance with the treaty of 1974, about the separation of forces — about separation of forces of Israel and Syria,” Putin said. “This will bring peace to [the] Golan Heights, and bring more peaceful [relations] between Syria and Israel, and also provide security for the state of Israel. Mr. President paid special attention to the issue during today’s negotiations.”

The news was predictably well received in Israel. The statement might also be interpreted as yet another message to Iran to pull its forces and allied militias back from the border with Israel. This issue, however, may just be the tip of the iceberg of what Putin agreed to with Israeli Prime Minister Benjamin Netanyahu and Ali Akbar Velayati, senior adviser to Iran's supreme leader, during visits to Moscow. The question of Russian “guarantees” on Iranian redeployment is still very much in the air, and Israel has little reason to put any stock in them.

Moreover, the day after the summit was the second day of an offensive to take back the last sections of Quneitra province, in southwestern Syria. The Syrian army, with the help of Russian air power, captured a strategic hill overlooking the Golan Heights.

“We managed to agree on some aspects on Syria,” Putin later stated in an interview with Russian Channel One. “In particular on the southern de-escalation zone near the Golan Heights, with full consideration of Israeli interests — and we also earlier discussed this with our Iranian partners. So we are on the right track in regard to fixing the situation in a broader sense, not just Syria.”

The issue of Iran was brought up in a broader context and was clearly influenced by Putin and Trump's recent conversations with Netanyahu.

“On the JCPOA [Joint Comprehensive Plan of Action, the Iranian nuclear deal], [Russia's] position is the same: It’s the tool that guarantees nuclear non-proliferation across the region,” Putin later explained. “Iran is one of the most controllable countries by the IAEA in the region, and it would be a pity if this tool ceased to exist. We understand President Trump’s thinking on this issue, his position — he was saying to us Iran should stop its destructive regional policies. But from our point of view, this [approach] shouldn’t be leading to the demolition of the JCPOA.”

The summit did as little for the Middle East as it possibly could, given the current political atmosphere in Moscow and Washington. The two men didn’t wade far into the two countries' differences in Syria and beyond. Neither did they seem to have much appetite for addressing bigger stability issues in the region. No paper was produced as an outcome of the meeting to solidify the respective voiced commitments of the parties.

Shortly after the Putin-Trump tête-à-tête, Lavrov said, “The talks went better than super.” Lavrov had used this phrase at least once before: in February 2015, following talks on the Minsk agreements to halt the conflict in eastern Ukraine. Back then, Russia negotiated a good deal for itself and its allied militias, but the conflict remains a heavy burden for Russian foreign policy. This time, the Russians are more concerned about the domestic constraints Trump will confront, and already faces, now that many Americans are even more critical of his attitude toward Putin at the summit and the pushback's possible impact on US policy on Russia and Syria.

A Kremlin official who spoke to Al-Monitor on the condition of anonymity said that even though Moscow is, by and large, content with the summit's outcomes, it has no illusions of another “reset” with the United States.

“The two presidents had some good conversation,” the official said. “In this sense the summit is a win for those who seek improvement in bilateral relations. But we know there’s another America today that is far more hostile to Russia. There was no dialogue with them, mostly the establishment, and there cannot be one in the foreseeable future. They see the idea of reaching out to Russia as divisive and will continue to stigmatize President Trump for such efforts. So we are not uncorking the bubbly here to celebrate success. There is hard work ahead.”